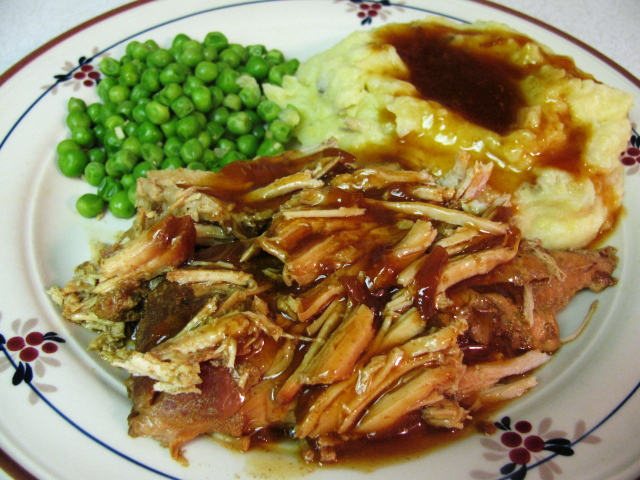 The only crockpot meal I can remember my mom cooking regularly for my brother and I as kids was a pot roast.  It was always served with mashed potatoes and gravy and usually green beans (but occasionally corn or salad) and biscuits.  This was one of the handful of meals that my mom taught me before I went away to college, and I think that this may have been the first real grown-up meal I cooked for a girl.  I recall it being quite well-received (minds out of the gutter–I was a good boy!), and it was a staple for my roommate and quasi-roommates as well.  Later it became a favorite of my kids.  The beauty was, it was unbelievably easy, really tasty, and easily served a small crowd.  More recently we serve it with a leaner roast, skinny mashed potatoes, and skip the biscuits, but the heart of the recipe remains the same.

My mom always made it with a beef roast of some sort (chuck, round, rump, etc.), and then made a gravy from some of the drippings from the pot, mixed with a can of Franco-American Mushroom Soup and possibly some corn starch as a thickener.  Later in life, I started using pork roasts instead, as they were moister than beef, and more flavorful as well.  Most recently, we used a pork loin roast, because it was leaner than the average pork roast, and it was great!

For my mom, it was as easy as poking the roast with a fork, adding worcestershire sauce, salt and pepper, then pouring a can of Campbell’s French Onion Soup over the top, covering it, and cooking it all day!  I made it moderately simpler by replacing the salt and pepper with Creole seasoning (I do that with almost everything that calls for salt and pepper), but otherwise haven’t changed a thing.

I’ve since tried a variety of complicated rubs and sauces and hot oven roasts, but to this day, none of it is any better or easier (4 ingredients FTW!), than my mom’s crock pot roast. 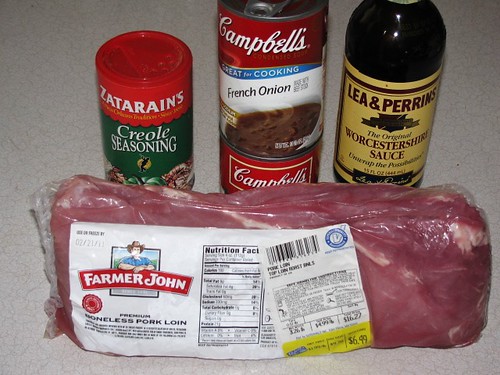 Only four ingredients, and if you don’t have three of the four of these in your cupboard right now, get thee to a grocery store! 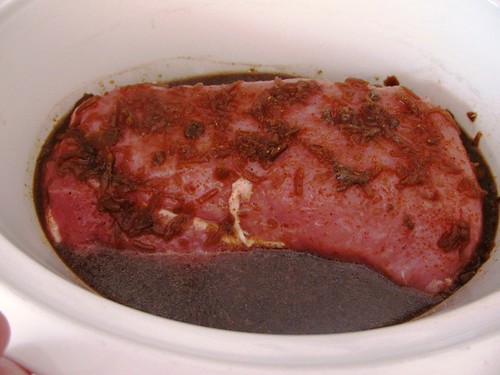 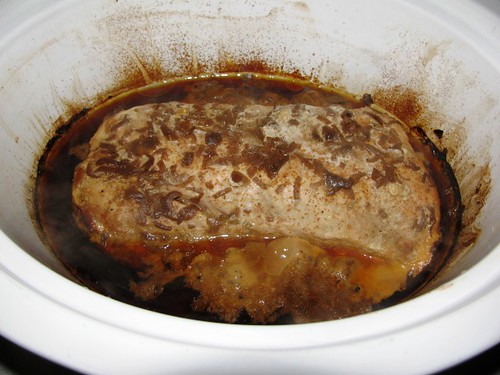 8 hours later, pork is done! Looks bleachy white now (beef roast looks prettier in the pot), but wait until you shred it… 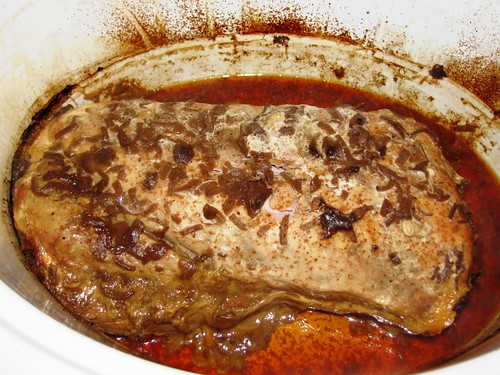 Most of the juices have been poured off, and the pork loin roast is ready to shred. 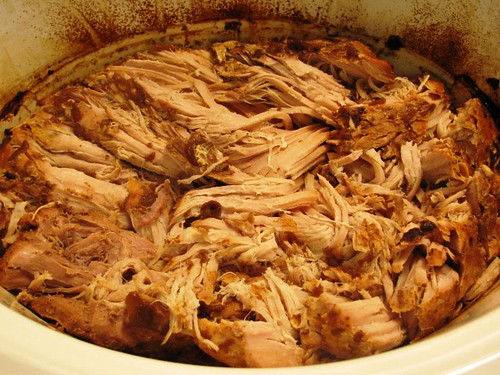 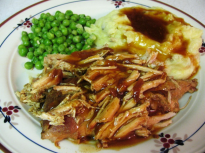 Print
Weight Watchers Info: 6 PointsPlus per serving (using a 3.5 pound roast)
Author: Adapted from Betty Greene
Recipe type: Main Dish
Serves: 10
Ingredients
Instructions
Notes
Note: To make gravy, pour 3-4 cups juices from gravy separator (keeping any fat/oil out) into pan, and heat to high. Add 1 tbsp corn starch mixed into 1 tbsp cold water and mix into juices. If it is still too thin, you can add more corn starch mixed into water. To cheat, use two cups of juices mixed with 1 can Franco-American (or your favorite brand) Mushroom or Beef Gravy. Heat, mix, and serve.
3.2.2499

The Taste Place is a food blog published by husband and wife Jeff and Colleen Greene -- serving up recipes, reviews, tips, techniques, and experiences since April 2009. The … END_OF_DOCUMENT_TOKEN_TO_BE_REPLACED