You are here: Home / In the Kitchen / Recipes / Appetizer Recipes / Atomic Buffalo Turds — The Spicy BBQ Appetizer with the Unappetizing Name 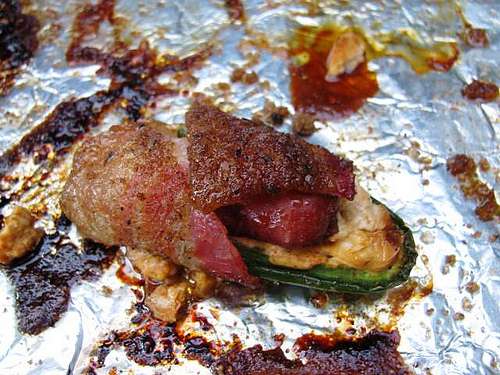 One of the best things about country music’s Stagecoach Festival has been the food.  That was where we first met BigMista’sBBQ and the folks from the Cowboy Way, our two favorite BBQ guys in Southern California.  The second year we went, one of the BBQ booths there was pimping something they called “Atomic Buffalo Turds” (ABT), which was certainly not the most appetizing name, but turned out to be half-jalapeno peppers filled with Lit’l Smokies (or other cocktail franks), spiced cream cheese, wrapped in bacon, seasoned, and then smoked.  It sounded like the perfect food for pepper-headed grill fanatics like us, but since we had both just eaten large lunches, we decided to come back later for a mid-afternoon snack.  Unfortunately, when we came back a few hours later, they were out!  Crushed, I vowed to figure out how to do that dish myself, so that I wouldn’t have to depend on anyone else for what was sure to be a culinary orgasmic experience.

When I got home, I Googled “Atomic Buffalo Turds”, and found a recipe that looked awfully similar to what had been described.  I made it for the first time later that summer at my annual “Hoot in the Hills” camping trip with my high school buddies, and they loved it!  In fact, it was requested again for this summer’s trip, from which I just returned.

A couple of the guys asked me to cut back on the amount of cayenne in the cream cheese this year, because they thought that part was just a bit too spicy, but a couple of the other guys thought that they were a bunch of wusses and that I watered it down too much.  So I’ll present the recipe as I originally found it, but know that you have the ability to cut down on the heat if you wish–of course, since the whole treat is based on a half of a jalapeno pepper, there will be plenty of heat for most people regardless.  If you really want to tame the recipe, you can also use the small red/yellow/orange sweet peppers.

So be ye forewarned–this is a spicy treat, but if your friends and/or family are spice tolerant, bacon loving individuals, this appetizer is a guaranteed hit! 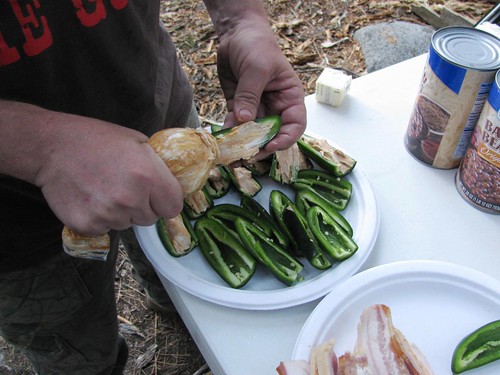 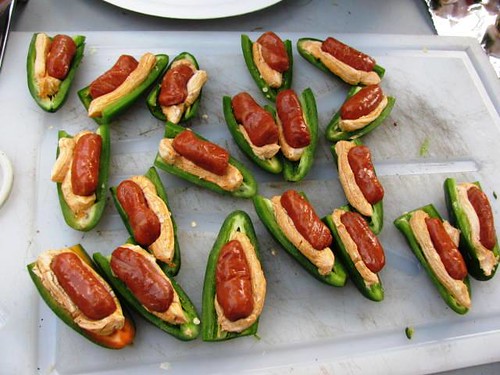 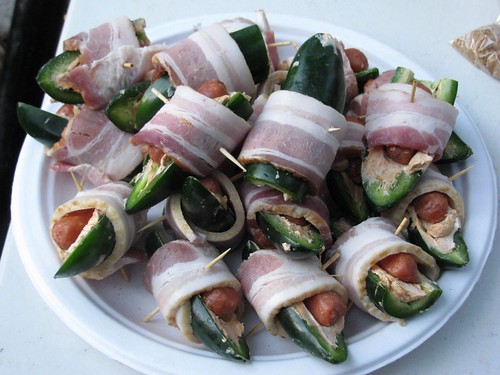 Wrapped in bacon and secured by toothpicks. 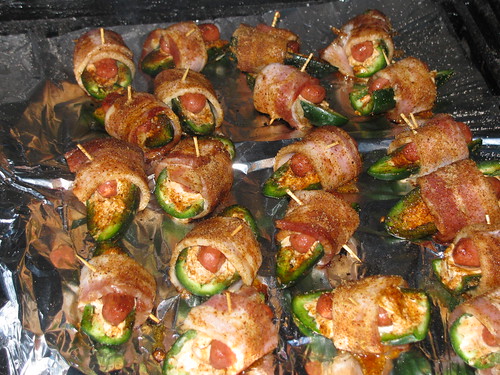 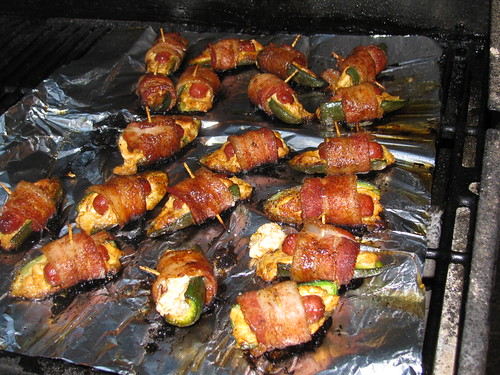 ABTs are ready to serve when the bacon is done–now! 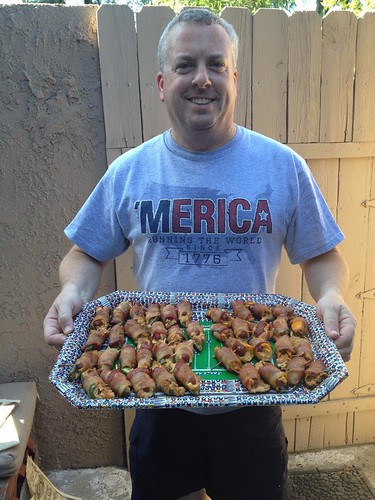 Me with a load of spicy (left) and sweet (right) ABTs on a football platter, headed to my church 4th of July BBQ, in my jingoistic t-shirt. Is there anything more America than that? 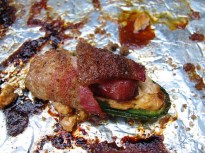 Print
Weight Watchers Info: 7 PointsPlus for 2 pieces (if using regular cream cheese), 6 PointsPlus for 2 pieces (if using fat-free cream cheese)
Author: BBQAddicts.com
Recipe type: Appetizer
Cuisine: BBQ
Serves: 6-12 servings (2 to 4 pieces per serving)
Ingredients
Instructions
Notes
*I have recently used miniature sweet peppers in place of jalapenos with great success, especially in mixed company. I generally do about half jalapenos and half sweet peppers if cooking for a crowd---just label them appropriately!
*Cut back on the cayenne (or eliminate entirely) if you want to reduce the heat a bit, though the jalapenos will likely trip the heat limit for most people anyways–if they can handle the jalapenos, they can probably handle the cayenne.
*You can use a lower fat (or non-fat) cream cheese and a turkey smokie if you want to make it a bit leaner, but you’re still going to end up wrapping it in bacon (do NOT use turkey bacon on this–that stuff sucks), so you may want to just go for the full fat/full flavor package on this dish.
*These could also easily be slow smoked at 225, and would take 60-90 minutes. Again, the key is that it is done when the bacon is done to your liking, as everything else can be eaten as is.
3.3.3070 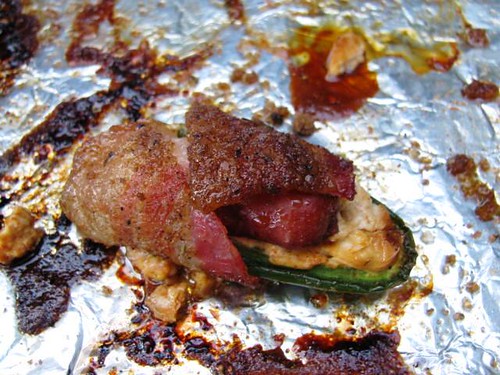 My guys ate these like candy–anywhere from 2-4 per person is possible.

The Taste Place is a food blog published by husband and wife Jeff and Colleen Greene -- serving up recipes, reviews, tips, techniques, and experiences since April 2009. The … END_OF_DOCUMENT_TOKEN_TO_BE_REPLACED