You are here: Home / In the Kitchen / Recipes / Appetizer Recipes / Artichokes Two Ways, in Order of Increasing Awesomeness–Boiled to Grilled 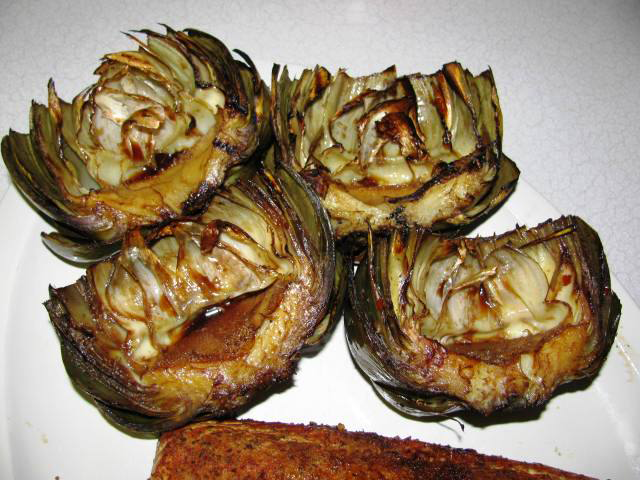 Artichokes are one of those things that often makes me wonder who first figured out it was worth eating.  Uncooked, it is really bitter, fibrous, sharp, and nasty, and has been rumored to be poisonous (though I see no evidence of that anywhere).   But if you boil or steam it properly with the right mix of herbs and/or spices, and possibly a decent dip, and then scrape only the edge of the leaf with your teeth and eat the heart, but not the fuzzy choke, it can be a wonderfully good appetizer or side dish, and is even occasionally worth the high prices that they usually cost at the grocery store (but I usually wait until they’re in the $2 range rather than the $4 range).  For the uninitiated, it still probably seems like a big solid thistle with sharp pointy leaves and a lot of work for very little reward.  Hopefully this post will take some of the mystery and difficulty out of the process for you, and give you a way to turn a hard green thistle into a really good artichoke, and then into an awesome marinated and grilled artichoke. 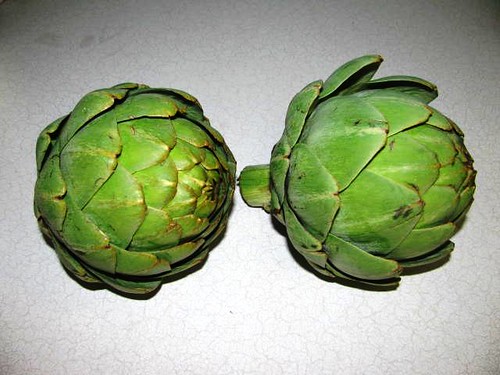 I’ve always boiled the artichokes, rather than steamed them, as it gives me more opportunity to add flavors in the cooking process.  Start by cutting off the woody stem flush with the bottom of the artichoke.  Then cut off the thorny tops of the artichoke, preferably with a serrated knife, though some folks use kitchen shears.  I end up taking an inch or so off the top, giving it a nice, flat shape. 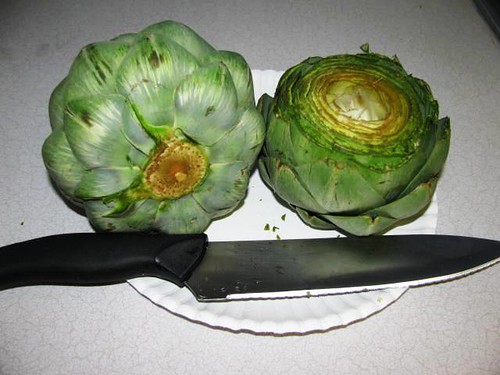 Artichokes with tops and bottoms chopped

At this point you can put it in your pan or pot and start adding the herbs and spices.  You can really add any number of flavorings at this point, according to your preference and spice tolerance.  I never have measured them in the past, but for the sake of the post, I actually checked this time to give some suggested portions (actual measurements in “recipe” below).  I like to start with a little port wine, which I always keep around for cooking (especially for soaking my hams before smoking).  I pour it right into the top of the artichoke in the pot, so it soaks into the leaves, and then fill the pot with water just enough to barely cover the artichoke. 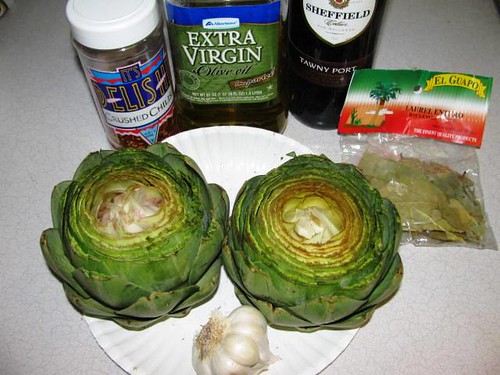 Trimmed artichokes with the materials for boiling them

I then add a bit of olive oil, red pepper flakes, garlic, and a couple of bay leaves to the water and crank up the heat to high.  You really can substitute in other flavors if you want, but this is a mix that works well for me.  You can also make it quite spicy or just a bit by increasing or decreasing the red pepper flakes.  Once the pan starts to boil, I put a lid on it and turn it down to simmer. 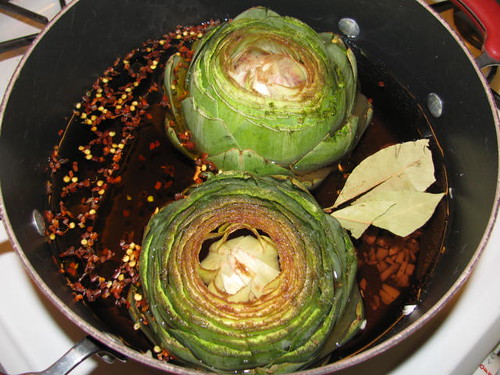 Artichokes in the pot!

How long it takes at this point is largely a factor of how big the artichoke is and how high your simmer is.  You know it is done when the leaves begin to open up, and you can pull a leaf out of it without too much difficulty (note:  you may want to use tongs for this–the leaves are hot!).  For these particular artichokes, they were ready in about 45 minutes, but it can be as short as 30 minutes or as long as an hour. 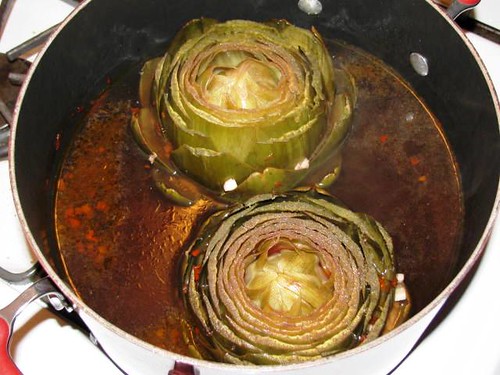 Drain the water from the artichokes, and refill the pot with cold water to stop the cooking process.  If you are eating the artichokes now, you don’t need to cool it any more than this, and can serve with mayonnaise, melted butter, aioli,  or whatever dipping sauce you like–or none at all!  I like mayo, Kellie likes butter, Hunter and Colleen prefer it without any dip at all.

If you’re going to grill it, you’ll want to cool it enough that you can work with it, so either cook it far enough ahead of time to give it time t0 cool, or rinse it in cold water a few times.  Once it has cooled, slice the whole artichoke in half.  Pull the smaller, purplish leaves out of the middle (they’ll usually come out in one or two bunches).  Then scoop the fuzzy “choke” from the top of the “heart” with a spoon, knife, or even your fingers, if you are so inclined. 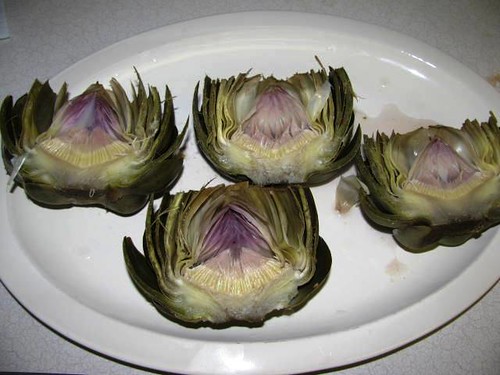 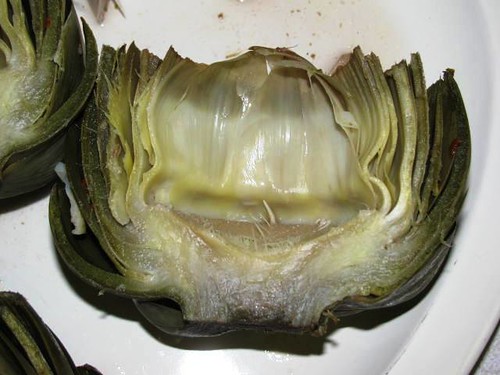 Now you can mix up the ridiculously easy and tasty marinade (or you could have mixed it ahead of time while the artichokes were boiling).  Mix 1/4 cup soy sauce with 1/4 cup balsamic vinegar, 1/4 cup olive oil, 1/4 cup water, and a teaspoon of ginger (I always keep jarred, minced ginger in the fridge).  I usually mix it straight into a gallon sized resealable bag, and then add the halved artichokes to the bag.   Let it sit for 30-60 minutes in the marinade, and get the grill ready. 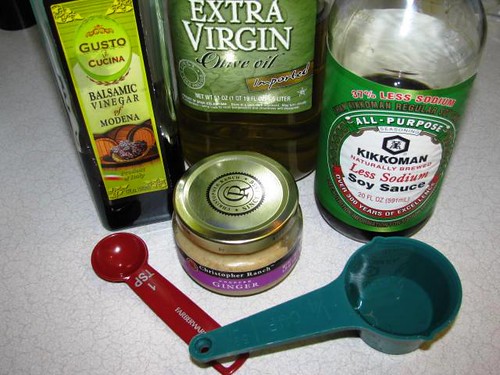 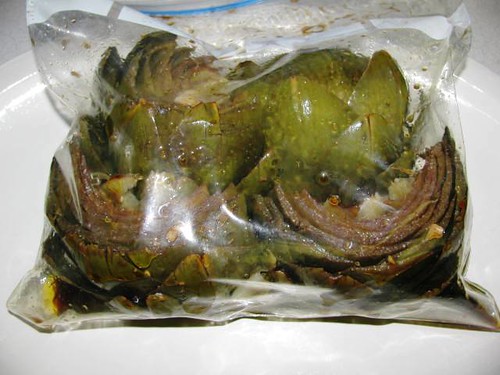 Artichokes in the bag with the marinade 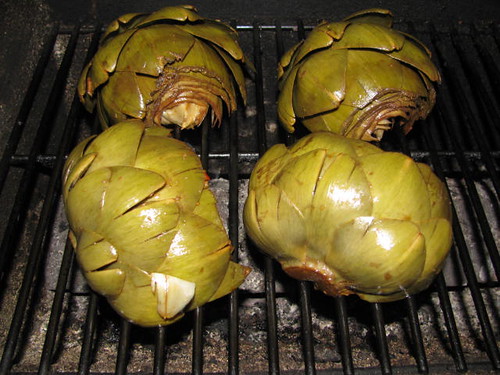 Artichokes face down on the grill 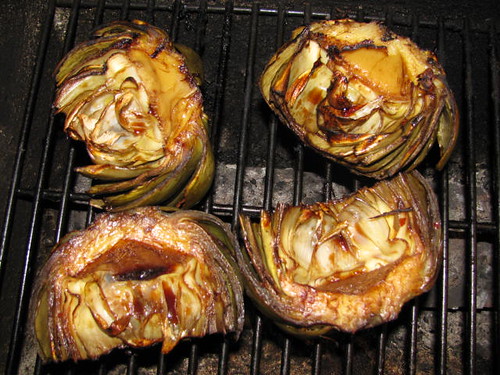 Final grilling on their backside, after drizzling marinade over the inside

Place the halves on the grill, open side down, for about 5-7 minutes.  When it starts to brown up, turn them leaf side down, and drizzle the remaining marinade into the open leaves and cavity.  Let it go for another 5 minutes or so, and they’re ready to go! 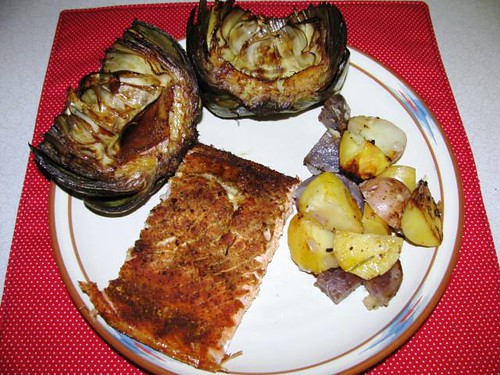 I suppose if you really wanted to, you could still use a dip or something for it, but trust me, the flavors in these grilled artichokes stand on their own!  If you don’t know, you eat the larger outer leaves by scraping the “meat” off the bottom inside of the leaf with your teeth, then discard the rest of it.  Once all the meatier leaves are gone  (assuming the purple leaves in the center and fibrous “choke” have been removed) you will be left with the round heart of the artichoke, which is 100% pure edible goodness! 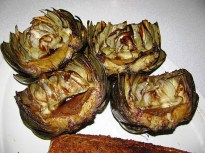 Print
Author: The Taste Place
Recipe type: Appetizer
Serves: 2-4
Ingredients
Instructions
Notes
6-5-11 Addendum: Someone recently suggested slicing the artichokes before you boil them, if you are going to grill them (don’t do it if you are eating them without grilling). This solves the difficulty of slicing and removing the chokes from the boiled whole artichokes, and was indeed much easier, though you have to be careful not to overboil them, as it is easier to do this when halved than it is whole.
3.2.2499

The Taste Place is a food blog published by husband and wife Jeff and Colleen Greene -- serving up recipes, reviews, tips, techniques, and experiences since April 2009. The … END_OF_DOCUMENT_TOKEN_TO_BE_REPLACED