You are here: Home / In the Kitchen / Recipes / Appetizer Recipes / Grilled Jerk Chicken Wings in Foil Packets — An Easy Appetizer With a Kick! 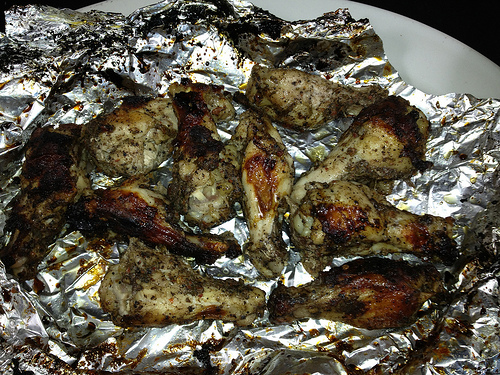 Since this is now the third time I’ve done a recipe using Walkerswood Jerk Seasoning (roughly two more times than I’ve promoted any other food item), you might well think that I’m being paid by the company or at least getting free jars of the stuff to cook with, but you’d be wrong.  <Memo to self:  Contact Walkerswood about getting an endorsement deal>  It’s just that it is super tasty, super healthy, and useful in several super easy dishes!  As I’ve mentioned in my posts about the jerk grilled drumsticks and crockpot jerked pork, you are free to use another brand or to make your own, but in my research, I’ve found this to be near perfect.  I used to find it pretty regularly in grocery stores, but recently I’ve only found it at Cost Plus World Market or online at Amazon.

Another thing I never shut up about is my awesome annual camping trip to the High Sierras where we have incredibly high standards for our camp cuisine.  Last year, in preparation for the trip, I was looking for an appetizer to do, and found an article on “50 Things To Grill in Foil” from the Food Network.  There were a lot of interesting ideas, but the two that caught my eye the most were the Hot and Spicy Shrimp, which I did last year and turned out amazing, and the Jerk Chicken Wings, which I did as an appetizer this year.

I’m pleased to report that the wings were a big hit as well, so I wanted to share them with you here.  One of my favorite things about cooking in foil is that you don’t have dishes to clean up afterwards, something that is especially important when camping or tailgating.  These are no different.  Before leaving for camp, I simply separated the wings, put them in a ziplock bag with the rub and some olive oil, squished them around to get them coated in the jerk seasoning, and  then threw them into an ice chest until I was ready for them two days later (you can do it immediately before cooking, or keep them refrigerated several days if you wish–I’ve done both with success).  At camp, I simply put them on a piece of over-sized foil, wrapped them up into a sealed packet, and through them on the grill (or you could use a “greasy grate”) over the camp fire.

The original recipe said it would take 25 minutes (flipping once) for 12 wing pieces on high heat, which is how it worked when I did it at home.   In camp, though, I did 36 wing pieces on camp fire coals, which did not cook nearly as efficiently as the gas grill at home, so it took about 45 minutes to actually cook them properly.  The one downside to cooking with foil, is that it is not easy to check to see if food is done without completely destroying the foil.  I could tell the chicken wasn’t sizzling like I’d hoped on the campfire, and when I checked on them after about a half hour, they were clearly not done yet.  So I put another layer of foil around the original packet (which had been torn to shreds in opening to check), added some wood to the fire, and cooked another 15 minutes.  This time, I could hear it sizzling in the foil, and when I took it off again, the wings were perfect!

The original recipe called to squirt lime juice over it when it was finished and sprinkle cilantro on top, and I’d brought both, but my buddies ate them so fast, that nobody (including me) noticed that I’d neglected to do that.  I actually made the same mistake at home, but both times it was good enough that I really don’t think it is remotely necessary and is frankly just more to buy and bring along.  Regardless, these are much healthier than your standard deep fried wings, and the foil packet keeps them quite moist and tender, rather than dried out, like so many restaurant/bar wings seem to be.

You could easily do this recipe in a foil packet in the oven or even a toaster oven on a rimmed cookie sheet (in case it leaked) by baking it at about 400 degrees, and could probably do it in a covered casserole dish as well, but then you’ve got dishes to wash, and nobody wants that, right?

NOTE:  If you use the standard jerk seasoning, the wings will be quite spicy!  No more so than regular buffalo wings, but they definitely have a  wonderful kick to them.  Walkerswood does make a mild jerk seasoning, and several other brands make milder seasonings than Walkerswood’s original, so if your crowd is not very spice tolerant, you might consider one of those options. 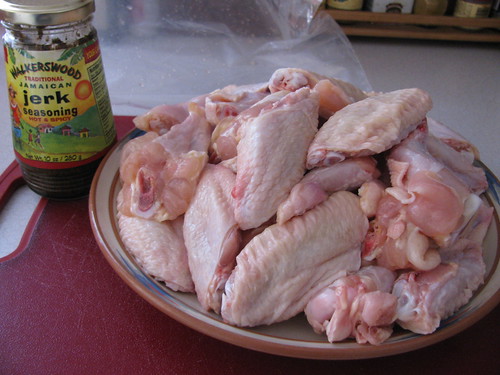 The recipe consists of just wings, some jerk seasoning, and a little vegetable oil. 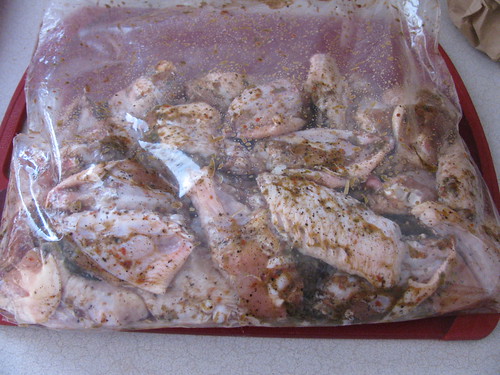 Mix it all together in a ziplock, and you won’t even dirty a bowl! Plus, you can then save it for hours or even days before you grill them. 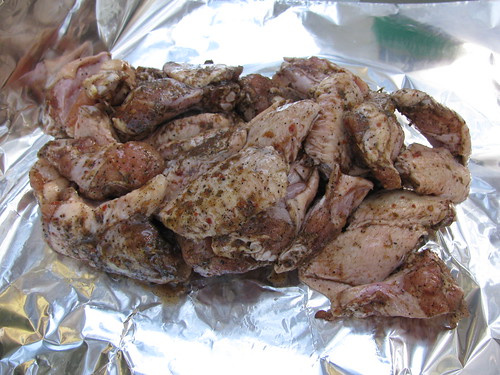 Chicken wings dumped on the foil at camp. Spread them out into roughly a single layer before wrapping them, so they’ll cook through properly. 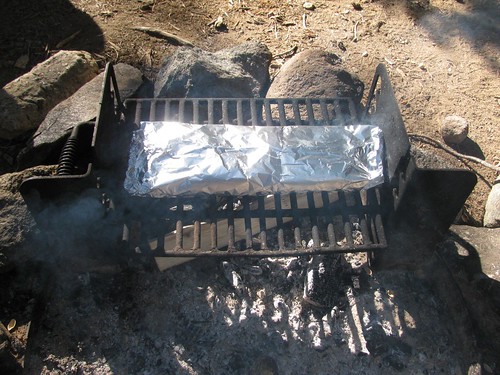 As you can see, this large batch of wings made a sizable foil packet! You can also see how the heat from the camp fire coals was not very efficient for cooking initially, until I added some wood to the fire later. 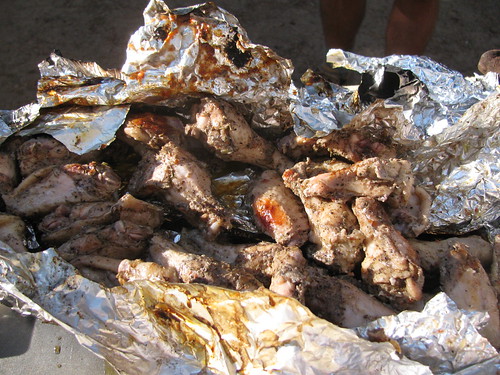 Shredded foil packet exposing the wings to my hungry friends. Who needs plates, when you can just stand around the foil packet on the table and throw the bones into the fire? 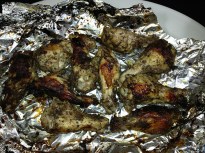 NOTE 2: You can double or triple this recipe, but you will definitely need to use the wider aluminum foil for a bigger packet and you may need to cook it longer to make sure they are cooked through.
3.2.2124

The Taste Place is a food blog published by husband and wife Jeff and Colleen Greene -- serving up recipes, reviews, tips, techniques, and experiences since April 2009. The … END_OF_DOCUMENT_TOKEN_TO_BE_REPLACED