You are here: Home / In the Kitchen / Carolina-Style Cole Slaw — A Light BBQ Side Dish 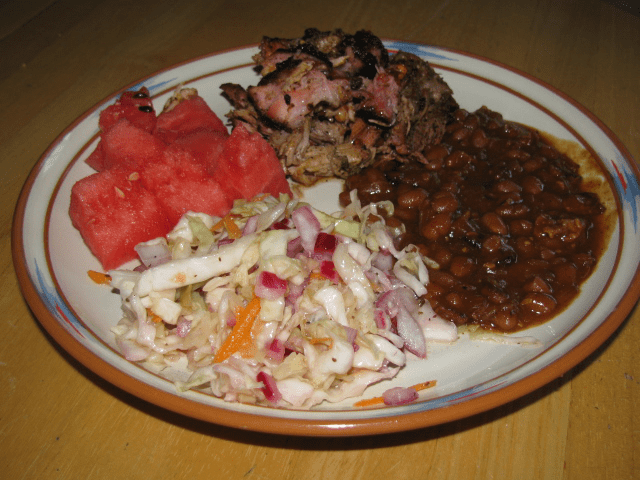 I spend a lot of time here on The Taste Place writing about BBQ and smoked foods.  I like to grill and barbecue almost as much as I like to eat the food that results from grilling and barbecuing.  But it might surprise you to hear that it’s not just about heaping piles of meat over flame in the great outdoors–I actually like the sides, too!

Four of my favorite sides are spicy bbq beans, cole slaw, watermelon, and jalapeno cornbread muffins, two of which I’ve written about before, and one of which is watermelon, about which there isn’t much to say, other than that it is good with barbecued meats.  Much like beans, there are a million recipes out there, many of which are good, and many of which are not.  There is also the debate over the relative superiority of the mayonnaise-based slaws versus the vinegar-based slaws.

I happen to like both, if done correctly, but in our quest to eat healthy, when I needed a cole slaw recipe to accompany some bbq meals last year, I looked for a good vinegar-based recipe.  And since I was looking to make it at my annual camping trip with my high school buddies, I needed it to also be easy and further more, since I was making it for my old high school buddies on a camping trip, who are NOT on my diet and notorious for giving much crap to anyone who does not provide a good dish, I needed it to taste good, rather than “healthy”.  So I made it last year to accompany a buddy’s brisket (with the aforementioned beans) and they loved it enough that I was asked to bring it again!

Some of the things I like about this (aside from it being tasty), is that it really is quite easy, portions of it can be prepared ahead of time, you can customize it heavily, and did I mention it is healthier than the average slaw?

Cole slaw raw materials (note that this time I used cider vinegar instead of white, and didn’t use the peppers and carrots).

After heating the Splenda/sugar, oil, and vinegar, pour it over the cabbage hot, to help wilt it and mix it.

Cole slaw in it’s natural element–next to beans, brisket, and bread, enjoyed next to a raging campfire. 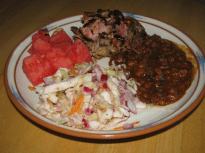 Print
Weight Watchers Info: 2 PointsPlus per serving
Author: Adapted from TexasBarbeques.com
Recipe type: Side Dish
Serves: 12
Ingredients
Instructions
Notes
You can use the pre-shredded cole slaw veggie bags at the grocery store if you wish (broccoli slaw bags also work). I do that at home sometimes, but the cabbage is more likely to wilt or brown if it is pre-shredded and you are waiting a few days to actually use it, plus it makes it less home-made and therefore braggable.

If camping, I pre-dice the onions and peppers at home and put in a small zip-lock bag, and pre-boil/mix the liquid ingredients and put in a jar or tupperware container, and re-warm it before tossing with the cabbage. This leaves only the cabbage and carrots to prep in camp.

You can skip the carrots or the peppers or the onion if you wish, but you probably shouldn’t skip the cabbage–unless you’re doing broccoli slaw, of course…
3.2.2499

The Taste Place is a food blog published by husband and wife Jeff and Colleen Greene -- serving up recipes, reviews, tips, techniques, and experiences since April 2009. The … END_OF_DOCUMENT_TOKEN_TO_BE_REPLACED