You are here: Home / Out & About / Erick Schat’s Bakkery — a Highway 395 institution 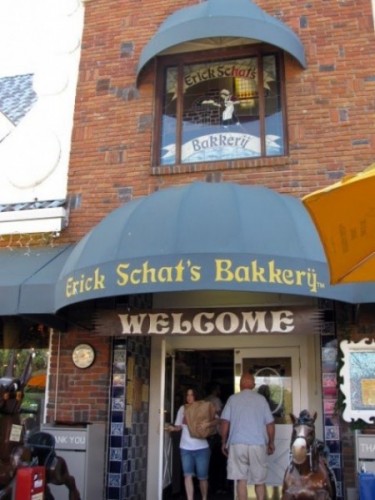 After I’d moved back to California in high school, my family used to regularly go skiing at Mammoth Mountain over spring break.  I always enjoyed the drive up 395, with the striking desert, Sierras, and volcanic geologic formations along the way.  And I always thought the towns along the way were cool — Lone Pine, Independence, and, not long before Mammoth Lakes — Bishop!

My dad always talked about retiring in Bishop, before he bought a sailboat.  It is a great town at the base of the Sierras, and it seems like most of the town is geared towards fisherman, campers, and hikers.   But one place that always stuck out, even though we never stopped there, was Erick Schat’s Bakkery.

Erick Schat’s Bakkery, as it looks when you whiz by it on the 395.

It’s Scandinavian (?) decor always stuck out in a city dominated by lodge/western architecture, and it always looked crowded when we went by.  And while my dad would stop at any scenic overlook or historic marker on the side of the road,  we knew better than to suggest stopping at a cool shopping or eating establishment.

Colleen feels almost as strongly as my dad about the pointlessness of shopping establishments, but cool eateries are another thing entirely.  She and I had both heard about Erick Schat’s from many friends, and their Yelp (363 posts) and Trip Advisor (58 ratings) reviews are all oustanding, so we decided that on our recent family trip to Mammoth, we would stop on the way and pick up some bread for our vacation breakfasts, lunches and a dinner.

Parking lot view of the bakery.

As cute as the exterior was, the interior was much more than I expected!  The place was crowded with racks of breads stacked so closely together that it was actually a little hard to get around.  Most of the dinner/lunch breads were in one side of the bakery, and the breakfast and dessert breads (and ice creams and candies) were in the other room, where the cash registers were located.  There were also shelves of great looking fresh jams, jellies, honeys, spreads, oils, and dips, lining the walls in front of the deli area (which is open for lunch hours, but was closed while we were there).

According to the San Diego Union Tribune, they make over 25,000 loaves of bread a week, and 450 different products a day–all overseen and tasted daily by Erick Schat himself (at least he still was overseeing and tasting it all in 2006)!

The other possibly illegal picture we took before being asked not to (we’ll take it down if they ask).

Unfortunately, for reasons I don’t really understand, photos were prohibited inside the store.  I can’t imagine there are any serious intellectual property or industrial espionage issues involved here, and that it is just because they don’t want buses full of people (and tour buses do stop there) taking pictures inside the store and disrupting business.   We took two pictures before being asked not to (though our daughter saw the sign on the door outside, we didn’t), so we did stop immediately, but I’ll post them here anyways.  If anyone from Erick Schat’s would rather we take it back down, we’ll be happy to do so, but I can’t imagine it gives away any state secrets…

They are most famous for their Sheepherder’s bread, which they have apparently been making continuously since it was introduced to the area by Basque immigrants in 1907!  We picked up a loaf of that, a loaf of squaw bread, a loaf of asiago cheesebread, an apple strudel, and some blueberry/cream cheese coffee cake.  They are also famous for their chili cheese bread, which Colleen and I were both tempted by, but our kids are pretty sensitive to spicy food, so we passed on it them–this time.

Cute tables out front, for those occasional days when it isn’t too cold or too hot in Bishop.

There are some cute tables on the patio out front where you could enjoy your treats or sandwiches on days when it isn’t too hot (most of the summer) or too cold (most of the winter) or when the 395 out front isn’t too busy, but we didn’t have time to sit and eat, as we still had 45 minutes or so left to go to get to Mammoth in time for dinner!

The world famous Sheepherder bread had a nice texture, with a crusty shell and an almost white bread softness inside, and a flavor like a really mild tasting sourdough bread.  The flavor disappeared when we used it for sandwiches, but at least didn’t get all mushy like real white bread would get (though we would never buy it).  The squaw bread was decent as well, but to me, was more like a dark wheat bread than the dark, molasses-y taste you get from most squaw breads.  The asiago cheese bread we heated to eat with our awesome pasta with meat sauce the first night was also good, but not great.

Breakfast breads! This Blueberry Cream Cheese Coffee Cake and Apple Strudel got us through several days worth of breakfast.

I thought the breakfast breads were better, but even they weren’t great.  The apple strudel was moist, but not mushy, and the apple flavor was good.  The blueberry cream cheese coffee cake was also good, but uneven, with some pieces heavy on the bread, and others almost entirely blueberries and cream cheese.  Where it was mixed evenly, it was really, really good, but otherwise–just good.

So while I hope we don’t upset any hardcore fans (and despite my less-than-overwhelming-review, I’m a Facebook Fan of theirs myself), it really isn’t the OMG BEST BAKERY IN THE WORLD!!!!, though it is certainly the best bakery on the 395 between Southern California and Reno, and it’s charm and incredible variety certainly makes it well worth the stop, and to say something further in their favor, I thought the prices were really quite reasonable–especially for a place that looks like as big of a tourist trap as this place does!

NOTE:  Erick Schat’s Bakkery also has an outlet in Mammoth Lakes and an amazingly crappy website that does the place no justice at all — but based on the crowds, they really don’t need the internet’s (our our) help.

The Taste Place is a food blog published by husband and wife Jeff and Colleen Greene -- serving up recipes, reviews, tips, techniques, and experiences since April 2009. The … END_OF_DOCUMENT_TOKEN_TO_BE_REPLACED