You are here: Home / In the Kitchen / Roasting Jalapenos: Firing up your Fiery Peppers 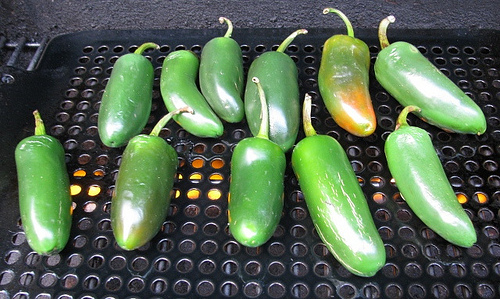 An awesome friend recently gifted me some roasted Hatch Chile Peppers, which we used (twice) in an awesome New Mexico Green Chile Chicken Enchiladas recipe that was both tasty and healthy.  Unfortunately, we then ran out of the roasted Hatch Chiles, which are really only available once a year (the story of which is written up in the enchilada post).  Equally unfortunately, we still craved the enchiladas!  We decided on a home remedy–roasting our own easily available jalapeños! 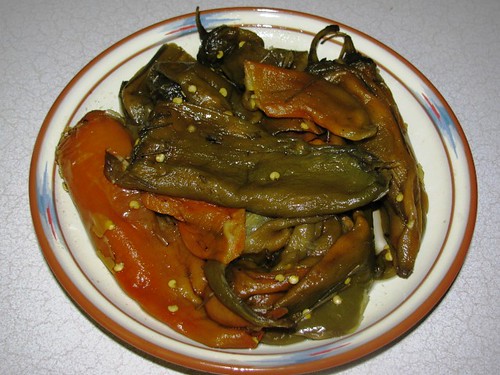 The roasted Hatch Chiles we used previously and now are trying to replace.

It wasn’t quite the same as the professionally roasted, highly sought after Hatch chiles, but it worked as an adequate substitute in our chiles, and is a process that makes useful roasted peppers for a variety of salsas, chilis (chili is a dish, chile is a pepper), and sauces.   Roasting a pepper tenderizes and softens the pepper, moderates the heat a bit, and brings out a sweet flavor you just don’t get raw, and it is quite easy to do–so easy, that this is another of those dishes that Colleen had to convince me was worth writing up, because I thought it was too obvious. 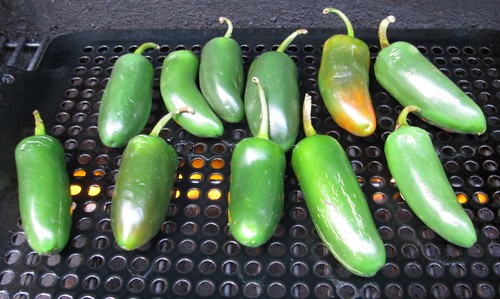 Fiery Jalapeños on the fire!

Historically, I’ve done it with just one or two peppers to chop up into canned Stagg Silverado Chili (I also add chopped tri-tip or smoked pork tenderloin or other grilled meats to make it what I call “value-added” canned chili), but for these recipes, I’ve done a full pound of jalapeños, which works out to somewhere between 10 and 12 large sized peppers.  You don’t prep them in any way other than to wash them, and then pop them straight on to a covered, heated grill or on a non-stick grill topper.  I usually use my gas grill, but if you’re already grilling something else the night before on a charcoal bbq, you can throw them on there as well.  I just wouldn’t go through the trouble of cooking up a new charcoal fire just to do some peppers.  If you don’t have a grill (and again I ask, what the hell is wrong with you?), you can do it on a gas burner or even in a broiler or toaster oven if you need to, but I prefer the grill. 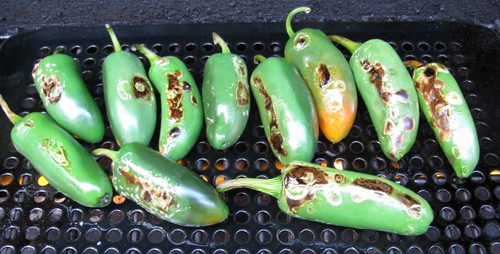 Peppers blistered and partially blackened on one side.

Depending on the heat of the grill, the peppers will begin to blacken in anywhere from 5 to 10 minutes.  Turn them to the other side and blacken that side.  If you have large green sections, you can roast a third or even fourth side.  The peppers don’t have to be solid black all the way around, but there should be obvious signs of cooking on all sides of the pepper. 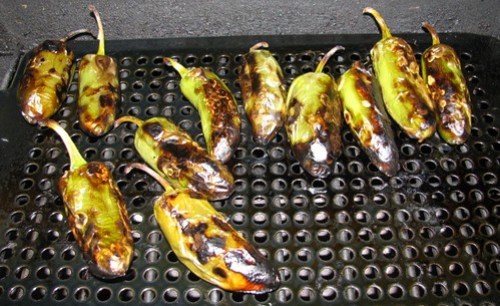 Peppers ready to come off the grill. They don't have to be totally blackened, just obviously cooked, like these. 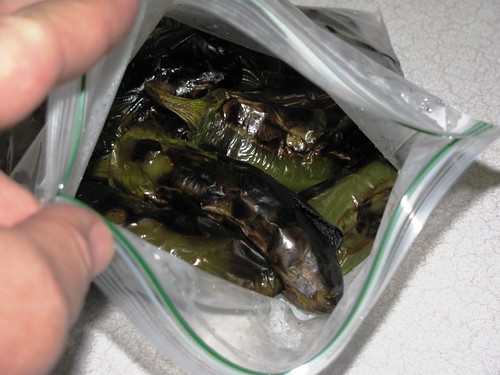 As soon as they cool enough not to melt the plastic, put them into a resealable plastic bag to help separate the skin. You can do this several days in advance.

When you’re satisfied that the peppers have been browned/blackened on all sides, take them off and after letting them cool a few minutes (just enough to not melt plastic), put them into a sealed plastic bag.  At this point, you can keep them on the counter for a half hour or so, or overnight or for several days in the refrigerator.  This process will loosen the skin from the pepper, making it easier to peel later, if you are so inclined. 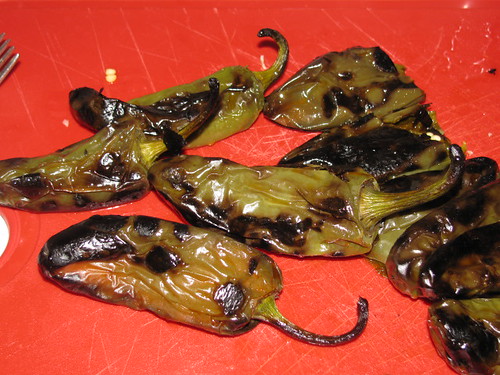 Ready to de-stem, peel, and/or seed.

When you are ready to use them, you have a couple decisions to make, based entirely on personal preference.  Do you wish to peel the peppers?  Do you want to seed and de-vein them?  I generally peel the easiest and toughest parts of the skin, that come off quite simply with a fork or even your fingers.  By happenstance, the toughest parts of the skin are the easiest to peel.  I don’t worry about getting it all off, but it isn’t hard to get them totally naked. 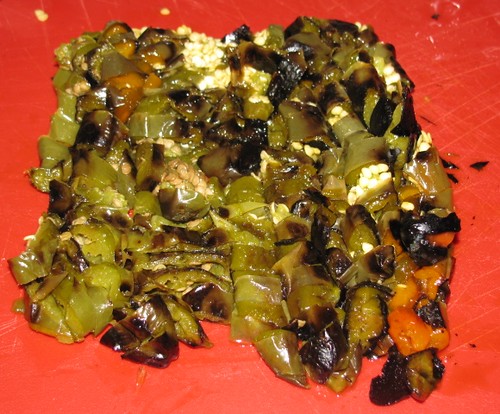 Peppers chopped for the enchiladas. I only partially skinned these, leaving colorful black pieces in the pepper mix for the dish.

Typically, I don’t seed and de-vein the peppers, but after our most recent experience, I may have to re-think that plan.  Seeding and de-veining will reduce the heat of the pepper significantly, and since Colleen and I are both pepperheads, and jalapeños rarely approach our heat tolerance, we always leave the seeds and veins in.  This week, however, the batch of jalapenos we got were way hotter than average, and seriously breached the pleasure/pain threshold when used in our enchiladas.  We’ve had similar problems with a Pineapple-Habanero Salsa that we’ve made, that was perfect the first time, and way too hot for wifey the second time.  It’s a recurring problem with peppers–you know the general range of heat in a  given pepper (anaheim, serrano, jalapeno, habaner0), but the specific peppers can be at the high or low end of the scale and can make a significant difference in your dish!

Just today I saw someone on tv roasting peppers and then peeling them in a pan or bowl of water, and just ripping open the peppers and stripping the seeds off on the edge of the pan or bowl, which seemed quite easy and nifty, and maybe I’ll have to give that a try next time.  But once peeled to your satisfaction, it is quite easy to cut off the stem and slice the pepper in half, then either remove the seeds or not before chopping or dicing the peppers to the size you need.

From there, you can put them into just about anything you want! 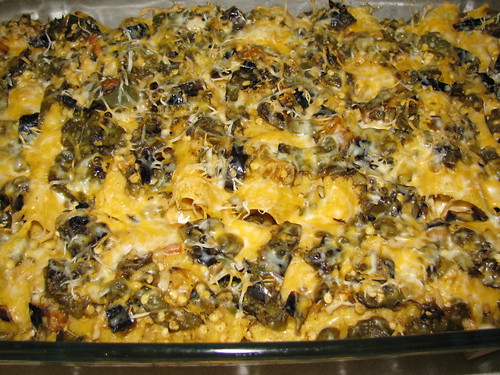 Roasted jalapeños where they are happiest -- on smoked chicken enchiladas!

The Taste Place is a food blog published by husband and wife Jeff and Colleen Greene -- serving up recipes, reviews, tips, techniques, and experiences since April 2009. The … END_OF_DOCUMENT_TOKEN_TO_BE_REPLACED