You are here: Home / Out & About / Pho Sure! Vietnamese Noodle Soup Is Our Favorite Fast Food. 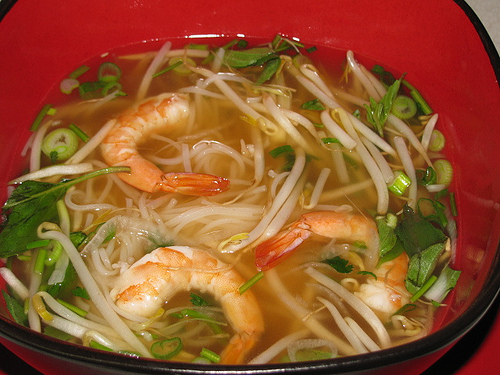 Ever since Jeff and I first started dating, pho (pronounced “phuh”) — Vietnamese noodle soup — has been one of our favorite go-to-take-out dinners… our version of cheap fast food.  When we’re both too tired to cook after a busy day at work, we almost always opt to pick up pho and bring it home to enjoy in front of the television, and on cold nights, in front of a warm fire. It’s delicious, soothing, super healthy, and super cheap.

We even bought special Asian-style red enamel bowls and plates, a while back, to enjoy our take-out pho in something a bit nicer than styrofoam.

The Skinny on Pho

Hubby prefers the rare round steak pho. The beef is raw, but thinly sliced, so it cooks quickly in the hot broth.

Pho consists of a soup base made up of fresh rice noodles and a soothing seasoned hot broth. Some people opt to go vegetarian, but a variety of proteins are frequently added: chicken and beef are the most common, yet most pho houses also serve shrimp, pork, or a mixture of these. Fresh vegetables (usually bean sprouts, limes and peppers), herbs (usually fresh basil), and sauces (one savory and once spicy) are included for you to add according to taste.

Pho houses are pretty much a dime a dozen in Orange County, and we’ve tried many, but our favorite remains our very own local neighborhood spot — Saigon Noodle House in Placentia in Placentia, located at the intersection of Kraemer and Yorba Linda Boulevard). Unlike most of the places we’ve tried, Saigon Noodle House serves very generous portions of meat (and their beef is always a lean non-fatty cut). Hubby pretty much always orders their rare round steak. I’ve been on a shrimp kick lately, but also really like their lean beef brisket and their chicken pho. And their fresh springrolls are generously packed with lean port and shrimp, instead of being deceptively packed mostly with lettuce.

We pretty much always add a small order of shrimp and pork spring rolls.

We haven’t been able to master this recipe ourselves yet (and frankly, since our favorite pho house makes it so darn good, so cheap, and so conveniently just right around the corner… I’m not sure we’ll ever bother to try).  But, if you want to try fabulous authentic Vietnamese pho, we urge you to try one of these traditional recipes by our good friend Kim Tran Burnell from the Rustic Garden Bistro — chicken pho or beef pho.

The Taste Place is a food blog published by husband and wife Jeff and Colleen Greene -- serving up recipes, reviews, tips, techniques, and experiences since April 2009. The … END_OF_DOCUMENT_TOKEN_TO_BE_REPLACED