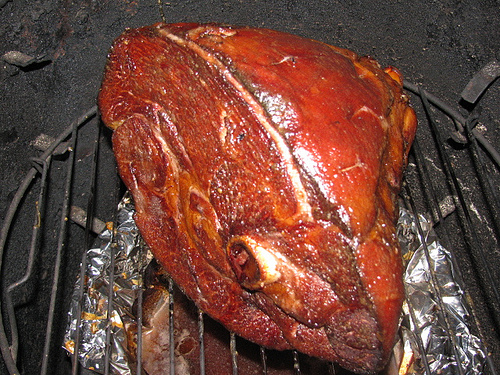 Since my original evangelical post on smoking meat, I’ve done posts on smoking turkey (a great party main course), salmon (my favorite to smoke for a special lady), and pork loin (a family favorite), as well as a few uses for smoked leftovers, like my superb smoked salmon spread and smoked turkey and wild rice soup.   While there are several other things I’ve smoked that I’ll get to eventually, a particularly glaring omission from my meat-smoking guide is ham–another great crowd pleaser tparticularly well-suited for holidays like Easter and Christmas (if for no other reason than because that is when they go on sale!). 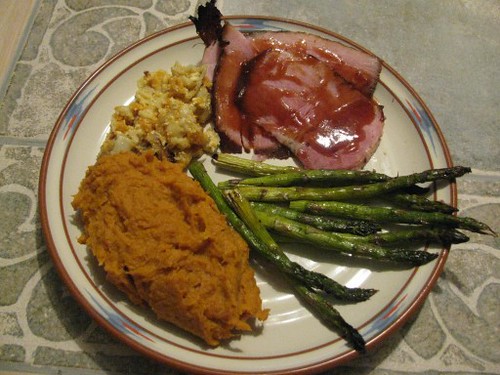 Is that a great meal or what? Smoked ham with grilled asparagus and bourbon mashed sweet potatoes (recipe link below).

, (which I continue to lament is apparently out of print, but still available used on Amazon at the link above), and it is a further example of how easy it is to do smoked meat that tastes like a lot more work than it actually is.  It does take some time, mind you, but not a lot of work.

I always start the night before by trimming off the biggest pieces of fat, stabbing it in various places with a knife, and then placing it in a clean, food-safe, unscented plastic trash bag.  I pour a cup or two of  (relatively cheap) port wine into the bag in a sink, and then fill the sink with water to collapse the bag around the ham and get all the air bubbles out.  It should force the wine to surround the ham nearly entirely, eliminating the need to rotate it more than once or twice while brining.  I call it a brining, but really it is more of an anti-brining marinade, as it removes some of the salt from the ham, while giving it a bit of an extra flavor and allegedly tenderizing it a bit. 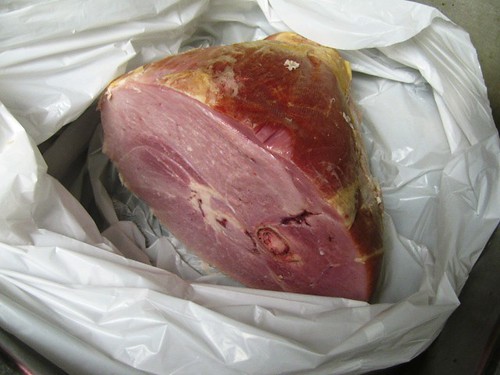 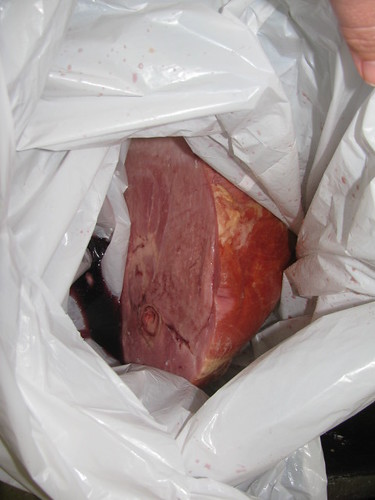 Wine going into bag with ham in bag in sink. 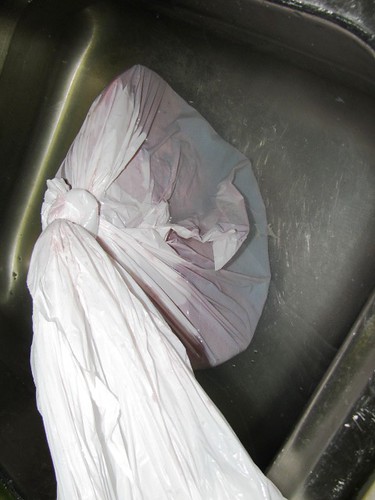 Bag with ham and wine in sink full of water to squeeze out air.

I have exclusively used my charcoal water smoker (something like this

on Amazon) for ham so far, but I’m certain it would work fine on my horizontal firebox smoker

as well.  I’ve really only used the upright water smoker because the ham has always fit fine on the grate (and I didn’t need the larger grill space of the horizontal smoker) and it seems to keep meat a bit more moist than the horizontal one does. 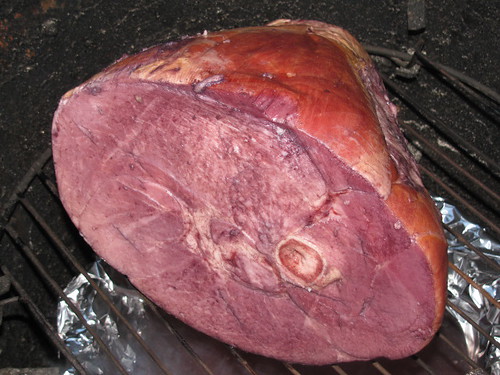 An 8-10 pound ham will smoke for 4-6 hours, so you’ll definitely want to get an early start on cooking if you’re providing the main course for the party.  Since it is generally pre-cooked, there is a pretty broad margin for error, but it will look and taste best if you do a full smoke and get it up to 160 degrees or so (you do have a decent meat thermometer with a remote probe for smoking, don’t you?).

Hickory is the classic wood to use and easiest to find, but I generally use apple, maple, or pecan instead.  Mesquite is going to be too strong for a long smoke and may taste a bit odd with ham, so I’d avoid it.

Get your smoker nice and hot, add your hot water pan (mix in apple juice or more port wine if you want a little extra flavor), throw a couple of wood chunks (2 or 3) on the coals, and put the ham on the grid.  Check every hour or so to add a few more chunks of wood and to be sure your temperature isn’t dropping much below 225 (I try to keep it between 200 and 250). 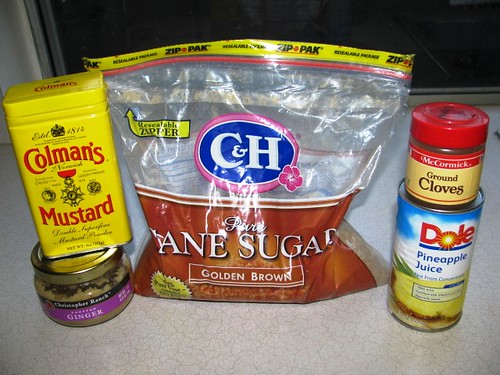 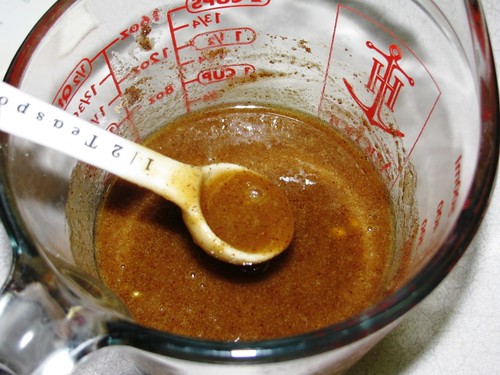 Sweet mud rub all mixed up.

At some point during this easy part, you can make your paste.  It is a simple mix of brown sugar, dry mustard, ginger, ground cloves, and just enough pineapple juice to make it into a mud consistency.  About 45 minutes before the end of cooking time, lift the lid for the first time and coat the ham with a light layer of the sweet wet rub.  Replace the lid and make sure everyone else has their act together with the side dishes. 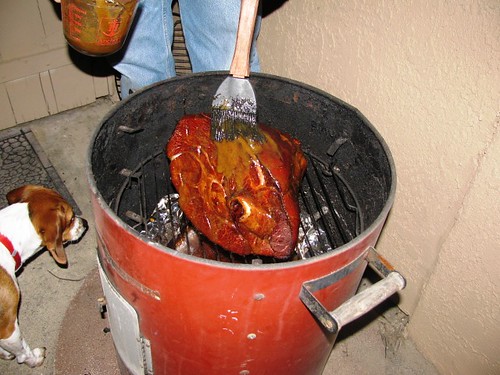 Painting the ham with the sweet mud rub (puppy is desperately hoping the ham will somehow fall out of the smoker and into her domain).

When you are finished cooking, remove the ham and cover with aluminum foil for 10 minutes or so before carving.  Everyone has their own way to carve a ham, but I like to try to remove quarters (or rounds) of the ham in segments, and cut them in a way that gives each slice at least a little bit of the external smoky-sweet surface of the meat.  You can serve it with a chutney or a sweet bbq sauce as a condiment if you wish, but it won’t really need it. 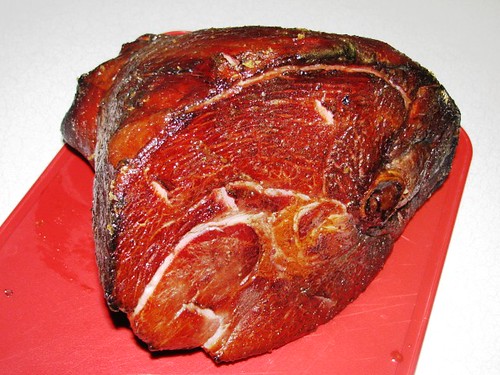 Some of our favorite sides to serve with it are Emeril’s Port Wine Cranberry Sauce, Pioneer Woman’s Whiskey Glazed Carrots, or the Neely’s Bourbon Mashed Sweet Potatoes (hmmmm… Sense a theme?).  We’ve also done grilled asparagus and spiced apples and macaroni and cheese with it, as well as serving it with breakfast, but I’m sure you have your own sides for ham, so I won’t belabor the point except to say that whatever you do on the side, this ham will make it better. 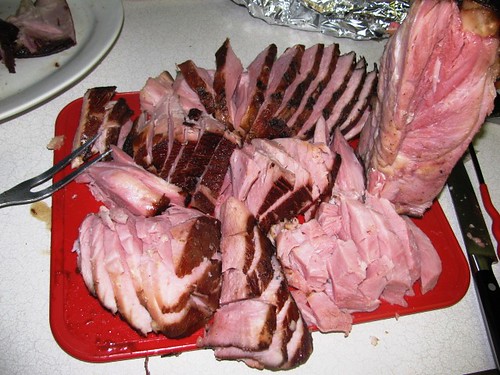 Smoked ham all carved up! 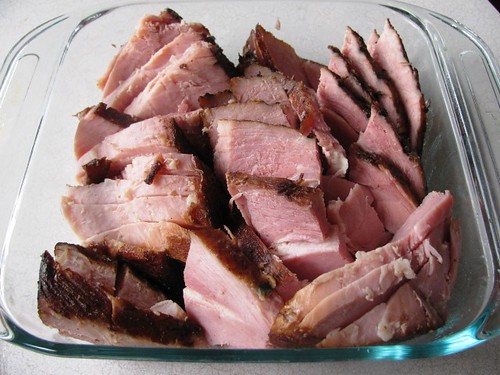 Carved smoked ham in a dish, as brought to a Sunday School potluck breakfast.

NOTE 1:  Be sure to save the ham bone and leftover ham for use in our crock pot recipes for Split Pea with Ham Soup, or Ham and Mixed Bean Soup, or any of a number of other possibilities that will make your ham purchase even more worthwhile!

NOTE 2:  You can do the ham the day before your party if you wish, and merely re-heat it (or not) on the day of the party.  The smoke flavoring will only improve after a day in a ziplock or under plastic wrap on a platter.

The Taste Place is a food blog published by husband and wife Jeff and Colleen Greene -- serving up recipes, reviews, tips, techniques, and experiences since April 2009. The … END_OF_DOCUMENT_TOKEN_TO_BE_REPLACED