You are here: Home / Out & About / Dog-friendly Fullerton Farmers Market open Thursday nights April through October 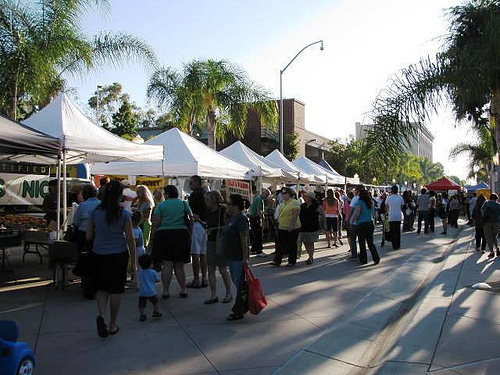 We like Farmer’s Markets.  A lot.  We have previously written about our pleasant experiences at the Atwater and Torrance Farmer’s Markets, which had a great selection of both produce and prepared foods.   We really hope to get to the Santa Monica and Hollywood Farmer’s Markets, which are apparently the two biggest in Southern California (just edging out Torrance).  And we keep planning to get to Irvine’s Sunday morning Farmer’s Market, but it interferes with our church schedule.  Contrarily, though we drive by the Saturday morning Yorba Linda Farmer’s Market fairly regularly, based on the proportion of crappy craft tables to actual produce and prepared food booths we see when we drive by, we may never actually go there.

But we have found an Orange County Farmer’s Market we like in Fullerton.  And unlike the LA Farmer’s Markets we have attended, they actually like and allow dogs–which if you know us, is very important!  On this particular night, it was actually marketed to dog owners, in an annual “Dog Days of Summer” promotion (this year’s will be August 11th, apparently).  So in addition to the normal produce, baked goods, nuts and dried fruits and sauces and jams and prepared food vendors, the event featured dog-related vendors, dog contests, and even a small dog show!

Dog toys at the farmer's market? Of course!

Part of the dog contest in the Plaza

Located in the Downtown Plaza on Wilshire Avenue, between Harbor Boulevard and Pomona Avenue, adjacent to the Fullerton Museum Center, there are a variety of parking options on the street and in parking lots and structures surrounding the plaza.  The market itself is pretty hard to miss.  On the day we were there, booths stretched nearly from Harbor to Pomona, and filled most of the plaza itself as well.

There really was a good assortment of actual Farmer’s Market-type goods, with fruits and vegetables and home-made (or at least locally produced), and baked and processed goods (breads, dried fruits, jams, sauces, etc).  There were also craft tables and random vendor tables (jewelry, face-painting, etc), but they didn’t overwhelm the fresh fruits and veggies.

The plaza was where the prepared food booths and trucks were.  While there was a decent assortment of places to get dinner and dessert, it was nowhere near the variety of the Torrance Farmer’s Market, and we weren’t terribly impressed.  Colleen was pretty pleased with her savory crepe from the crepe stand, but I was underwhelmed with the Italian Sausage with Peppers and Onions that I got.  We were disappointed that after the great bbq from BigMista’s BBQ at both Torrance and Atwater Farmer’s Markets, the only “bbq” vendor at all was a local church with tri-tip sandwiches, though after eating my sausage sandwich, I wished I’d gone ahead and supported the church rather than a mediocre sausage vendor.

I shoulda tried these guys instead...

We had one of the ice cream sandwiches, which was pretty good, though the line for that (and the food itself) was long enough that we took turns trying to grab a table while the other looked for tables to swoop in on.  We eventually found a place to sit, but had to share with other market goers.  We’d purchased some chicken jerky dog treats from one of the vendors for Holly as well, to try to keep her busy while we ate, but she was able to dispose of her treats much faster than we could ours.  She certainly enjoyed them, though!

Menu board for the ice cream sandwich vendor

We left the farmer’s market with our arms quite burdened with bags of fruit and vegetables and some breakfast breads, and were quite pleased with the evening out.  Lots of good people- and dog-watching, and a nice variety of locally grown and reasonably priced  produce for our next week of meals!

The Taste Place is a food blog published by husband and wife Jeff and Colleen Greene -- serving up recipes, reviews, tips, techniques, and experiences since April 2009. The … END_OF_DOCUMENT_TOKEN_TO_BE_REPLACED