You are here: Home / Out & About / Blues, Brews, and Birds — Champy’s Famous Fried Chicken in Chattanooga 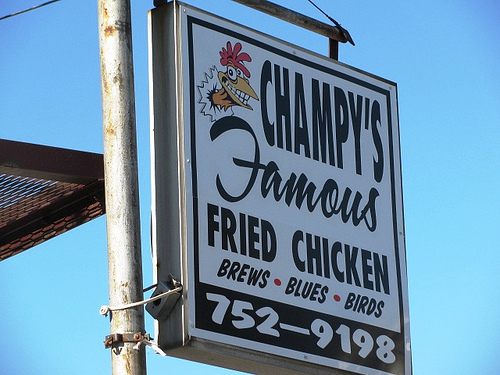 On our last full day in Tennessee and surrounding states (see Cracker Barrel, Maker’s Mark, Jack Daniels, Dillsboro Smokehouse, Wears Valley BBQ, Nashville’s Music Row, and the Ole Smokey Moonshine Distillery), we left the Smokies to head back towards Nashville.  We wanted to check out the consensus choice for the best Civil War site in Tennessee on the way, so we headed south towards Lookout Mountain Battlefield National Military Park near the Georgia State line, and planned to stop in Chattanooga, TN for lunch on the way.

We figured there had to be good eats in a city the size of Chatanooga, and we looked online for some recommendations.  The decision was made to track down Champy’s Famous Fried Chicken in downtown Chattanooga.  People online raved about the chicken and the catfish, and what’s not to like about a place whose motto (or at least one of their mottos) is “Blues, Brews, and Birds”?

When we got off Hwy 75, it took us down through some less-than-lovely parts of Chattanooga.  We did pass right by the original site of the “Chatanooga Choo-Choo,” but as we got closer to the location and passed more abandoned buildings and homeless folks, we might have begun to panic just a bit.  But when we actually got there, it was right across the street from the University of Chattanooga at Tennessee, and several modern-looking office buildings, so we decided it was safe enough to exit our vehicle. 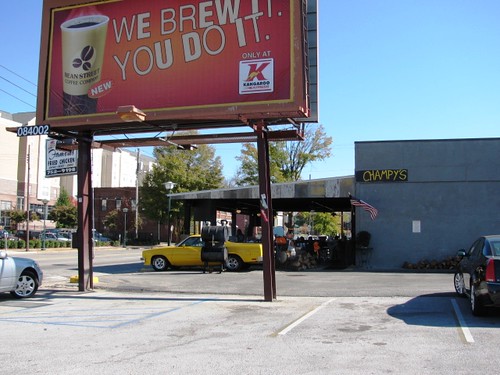 Turns out it was worth exiting!  Based on the live music offered, the nice patio, and the relaxed interior decor, it looked like a great place for dinner and after-hours entertainment, but it served up a mighty fine lunch as well.  There was a real live smoker out front, and while we didn’t eat anything grilled or smoked, that always provides an extra level of comfort for me in a restaurant.  And the signs displayed a great party attitude, that we were unfortunately unable to partake in on a day we needed to drive another four hours or so.  After all, it is rare that you visit a restaurant that markets 40 oz domestic beers as their specialty, and even offers 40 oz beer coozies with their logo on them, but while I laud the spirit behind 40s, 4o ounces of crappy beer is about 39 1/2 ounces more than I actually want to drink, especially when I have to drive, so sweet tea was the choice. 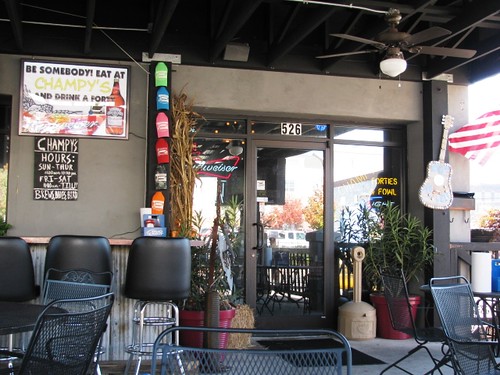 View from the patio--sign on the left says "Be somebody: Eat at Champy's and drink a forty", sign on the left of the door advertises "Forties and Fowl", and the guitar says "Seat Yo Self" 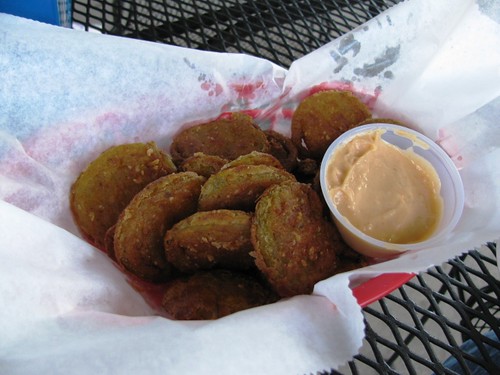 Strictly for research purposes, we once again ordered way more food than either of us actually needed.  The menu, of course offered many more things than we were able to eat, but we did our best for you, the loyal Taste Place reader.  While there were several attractive options, we ordered the appetizer pickled fried green tomatoes to start.  Colleen had fallen in love with fried green tomatoes by now, so that was a must have.  While the pickled version was Colleen’s least favorite of the three we’d sampled (once on a BLT, once standard fried, and now pickled), it was actually my favorite.  I loved the tanginess of the pickled tomato with the sweetness of the batter, but she’s not a huge fan of pickles or olives, so I suppose we shouldn’t have been to surprised with our difference of opinion. 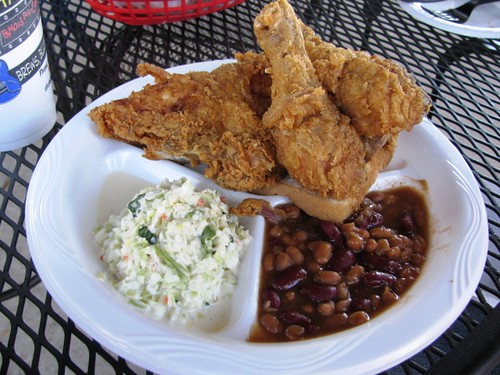 Fried chicken--the specialty of the house! 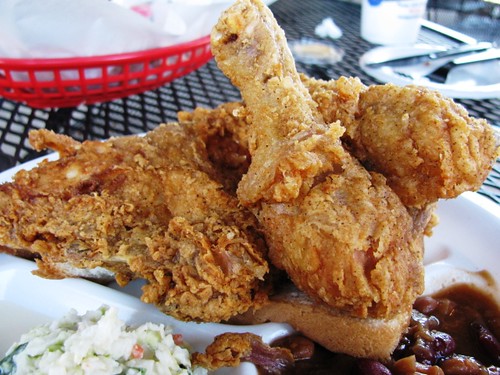 Close up of the chicken

With their twin mottos of “Blues, Brews, and Birds”  and “Forties and Fowl”, clearly fried chicken was their specialty, but as good foodies with diverse tastes, it would be silly for both of us to order the same things, so she got the half chicken, and I got the fried catfish, with the understanding that we’d both split up our plates.  The fried chicken was indeed really, really good, but wasn’t the life-changing experience we had hoped for based on the comments we’d read online.  The slaw we both had was also good, but not spectacular, which was pretty much our impression of their baked beans as well. 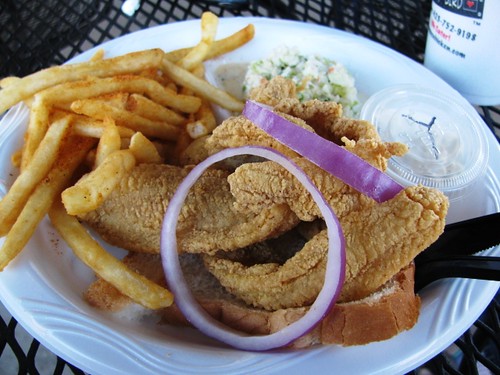 The catfish, with awesome french fries in a strong supporting role

The catfish, however, was the best either of us had ever had, with a great crispy cornmeal exterior, and a soft tender, and tasty interior.  The tartar sauce was also good, and we made quick work of the fish.  The fries, which I usually am not always a huge fan of, were also the perfect combination of crisp on the outside, and soft on the inside, with a cajun seasoning on the outside that gave it a nice flavor and some good bbq sauce to dip it in.

We’d wished we had room to try out the key lime pie or the mud pie, but after the super-sized meals we had already wolfed down, it was just not to be.  And after a good meal, the semi-scary neighborhood just didn’t look as bad as it did on the way in!

The Taste Place is a food blog published by husband and wife Jeff and Colleen Greene -- serving up recipes, reviews, tips, techniques, and experiences since April 2009. The … END_OF_DOCUMENT_TOKEN_TO_BE_REPLACED