You are here: Home / Out & About / The Cowboy Way Bar-B-Que in Palm Springs 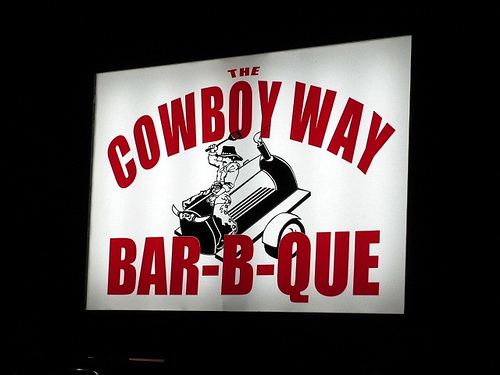 Two years ago at the Stagecoach Festival, we hit the BBQ competition and thought it was one of the best parts of the day.  That was where we first met BigMista’sBBQ, who has since become famous on BBQ Pitmasters and local television, and whom we stalk regularly online via Facebook and Twitter, and at his many Farmer’s Market appearances.  Last year, we went back, and while we knew BigMista’sBBQ wasn’t going to be there, we were still looking forward to seeing our other favorite bbq crew from the previous year–“The Cowboy Way“, out of nearby Palm Springs–after all, those guys had served us some pork chili that we both agreed was probably the best we’d had anywhere. 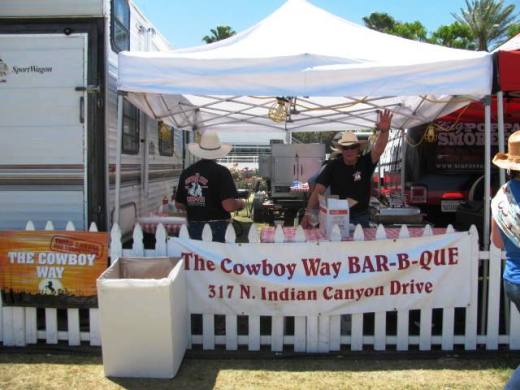 We were not disappointed.  While we sampled a half dozen competition bbq offerings again, The Cowboy Way’s chili again stood out.  The chunks of pork, thick sauce, and legit spice was chili the way it should be done, and the guys running the booth were great.  We resolved that the next time we had an excuse to get out to Palm Springs, we were going to go to their restaurant and have a full meal there. 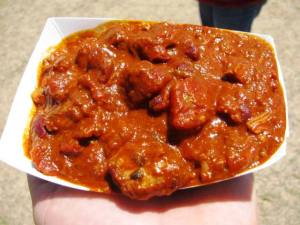 If you spend much time here at The Taste Place, you know we’re not super fancy people and we don’t believe good food or a special occasion needs to be expensive, so it shouldn’t surprise you too much to hear that when I got tickets for the Judds at Agua Caliente for Colleen’s birthday, she immediately suggested we hit The Cowboy Way for her birthday dinner!

When we got there, they had fairly recently moved, and because they didn’t yet have their own website up, and the restaurant review sites still had the old address up (some still do–note the proper address is 2000 N. Palm Canyon Drive, on the left side just as you get into town from the north, not 317 N. Indian Canyon Drive), we initially showed up at the wrong place and thought they were closed!  Fortunately, there was a sign in the window with the new address, so we went back up the road and found the right spot.  Their new spot is much nicer than the old one, which appeared to have only counter seating and a couple fast food style booths.  This place was much larger, with a bar, a take-out counter, patio dining, and even space for live music, which was setting up as we were leaving. 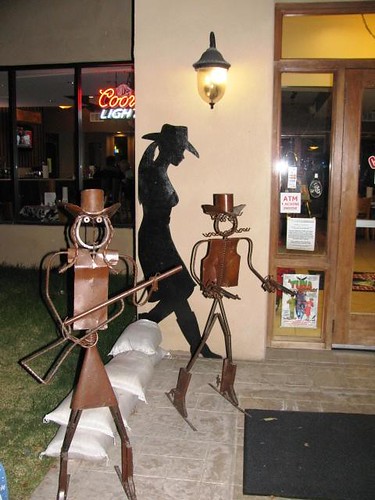 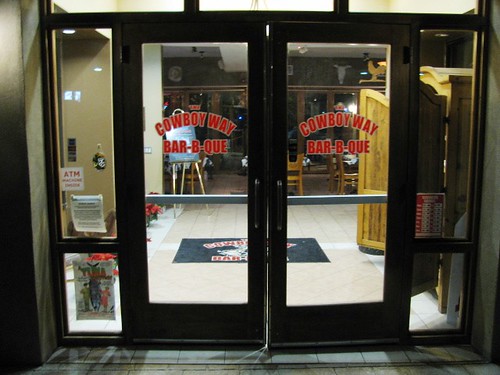 A much larger place than their old location seemed to be 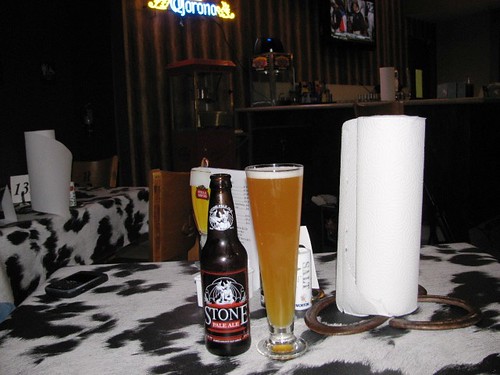 Faux cow fur table cloths and the sign of good bbq--rolls of paper towels on the tables!

The decor was suitably western bbq as well, with metal rod cowboy statues and silhouetted cowgirls out front, and faux cowhide table cloths inside.  The menu was pretty standard–every bbq meat and side you’d expect to see, at very reasonable prices.  Brisket, pulled pork, ribs, tri-tip, chicken, and, of course, chili, all appealed to us, but fortunately, we had options.  Colleen had come for the pork chili, so she got a full serving with cornbread, and I chose the combo plate, which came with the brisket, pulled pork and tri-tip.  I got the slaw for my side, and we ordered the sweet potato fries as an appetizer.  That gave us pretty much everything we needed–or at least everything we could possibly eat. 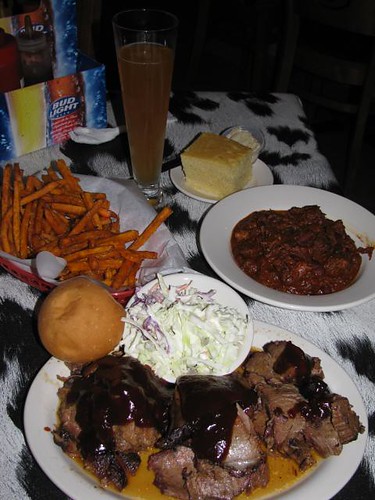 The full spread--so much more than we needed. Across the bottom, from left to right is the pork, tri-tip, and brisket 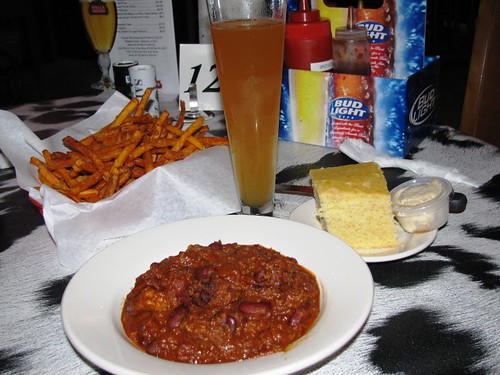 The chili was as awesome as we remembered, and the pork and brisket was excellent, too.  We also loved the fries.  The tri-tip and slaw was also good, but the least necessary items we tried.  When the owner came by, we told him that we’d come based on meeting him at Stagecoach and how we’d craved the chili ever since.  When he saw what we ordered, he immediately told us that we had to try the chili mac.  It wouldn’t have occurred to either of us to order it, but he insisted we have some, and brought us over a bowl, and I must say, it was so much better than I’d imagined!  The macaroni and cheese was creamy and tasty enough to love on its own (and I’m not a huge mac and cheese fan), but with the chili mixed in, it was simply great.  In fact Colleen says when we go again, she may just order a bucket of the chili mac! 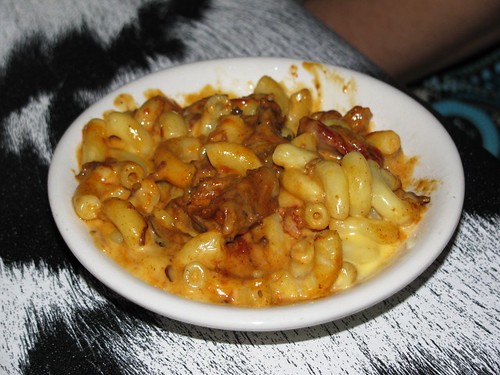 Chili mac! Looks pretty good, but trust me, it is better than it looks!

The bar didn’t serve mixed drinks (but I read in one of the reviews that they hope to soon), but they had a great selection of national and local beers and wine, including several offerings from San Diego’s Stone Brewery (pictured above).  At the end of the meal, our waitress brought over a Mississippi Mud Pie for Colleen’s birthday.  I don’t know if it was just because it was her birthday, or because we were nice to the owner, or because we met the magical meal price threshold for a free dessert, but it was a nice (and very unnecessary to our diets!) gesture.

We wound up taking home enough food to feed us both lunch the next day, and escaped with a bill that didn’t really injure our wallet very much at all–always a plus in our book! 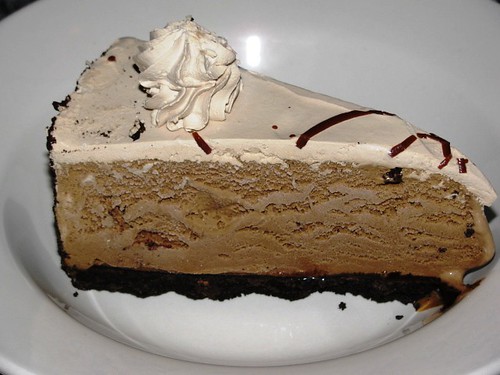 I wouldn't call it icing on the cake, but it was the dessert on the table--thank you, Cowboy Way!

The Taste Place is a food blog published by husband and wife Jeff and Colleen Greene -- serving up recipes, reviews, tips, techniques, and experiences since April 2009. The … END_OF_DOCUMENT_TOKEN_TO_BE_REPLACED