You are here: Home / Out & About / The Ole Smoky Tennessee Moonshine Distillery–Drinkin’ Across Tennessee, Part 3 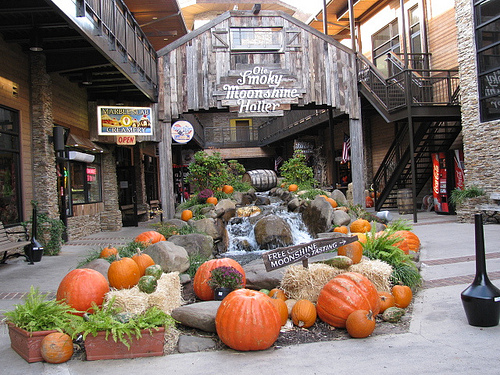 I have previously written about the first two stops on our “Drinkin’ Across Tennessee and Kentucky” tour last November:  the Maker’s Mark Distillery Tour and the Jack Daniels Distillery tour, both of which were excellent.  But we were almost as excited about our one scheduled booze tour for the Smoky Mountains leg of our trip:  The Ole Smoky Tennessee Moonshine Distillery.

When we first started planning our vacation, we’d seen articles about how how the first legal moonshine distillery in Tennessee was opening soon, and we immediately added it to our must do list.  It met our touring standards both from the foodie/boozie perspective and from our local history/culture perspective, and it was just right up the road from where we wanted to stay in Wears Valley, even if it was located in the super-tacky tourist trap town of Gatlinburg. 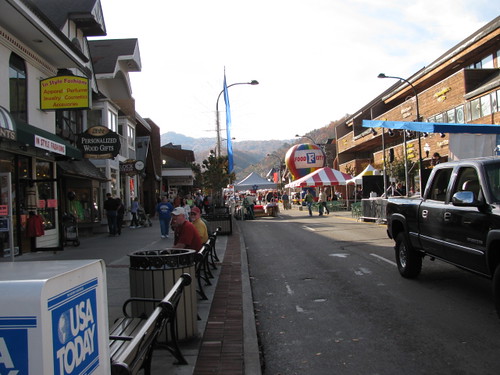 Downtown Gatlinburg--very walkable, but not sure why you'd want to...

After a day on the Gatlinburg Arts and Crafts Trail, we headed downtown to find the distillery.  From their website, Facebook page, and some YouTube videos we’d seen, we had the false impression that this was a big, stand alone-type building that would be easy to find, but that was not the case at all.  It was buried in the heart of the tackiest, tourist-trappiest part of downtown Gatlinburg, right next to one of the many Ripley’s-branded tourist traps in town (in between the Ripley’s Haunted Adventure and the Hollywood Wax Museum), back off the street in a little shopping alley off the main street.  We actually walked right by it the first time, as the signage on the street was easily lost amongst the rest of the clutter along the street. 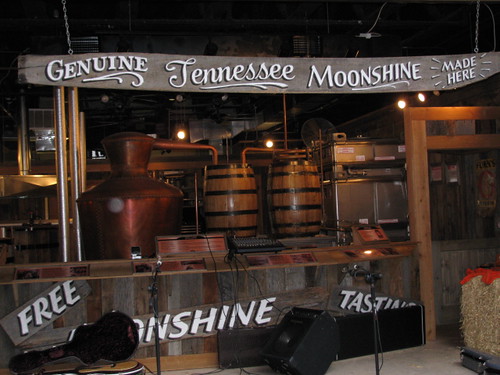 Most of the distilling operation is visible here. You can also see how the static display signs are set up, ringing the equipment

The place itself was a bit of a disappointment as well.  After seeing the very professional, in depth tours at Jack and Maker’s, we admittedly had pretty high expectations, but this was a small facility in a single room the size of a drug store at best.  And rather than the guided tours led by experts at the other places, this was a self-guided tour around a static display of the distillery equipment.  On the other hand, since we’d already seen the initial part of a distilling process twice at the other places, we really didn’t need another detailed explanation of that part of the process.  The signs that discussed moonshine’s role in local history and culture were interesting, and they did have live “mountain music” out front (which was cool, but did interfere with reading the tour signs…). 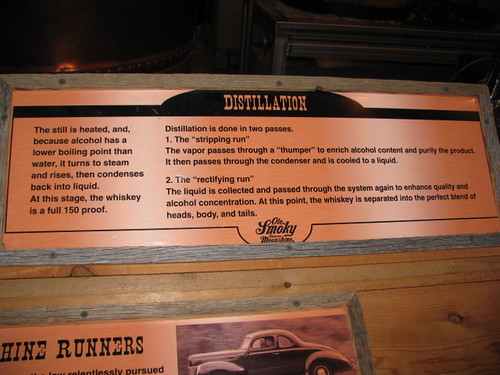 An example of the signs explaining the technical process 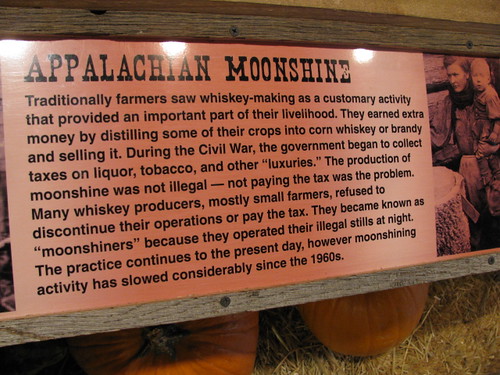 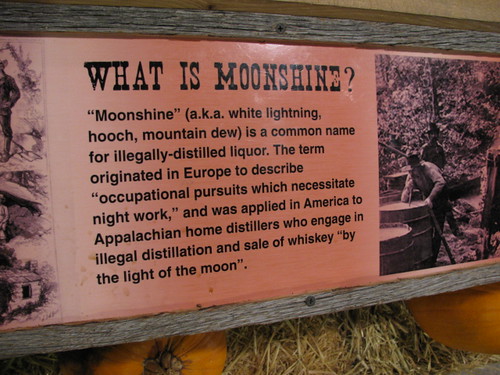 Now you know why it is called "moonshine"! 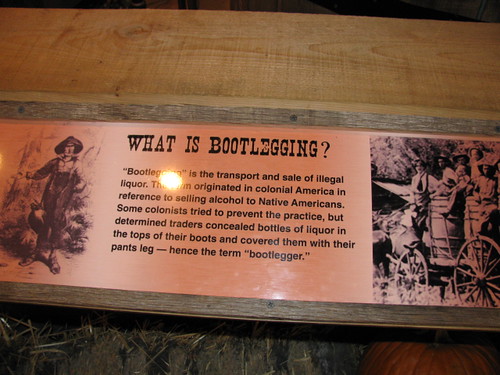 You probably wondered where the name "bootlegger" came from... 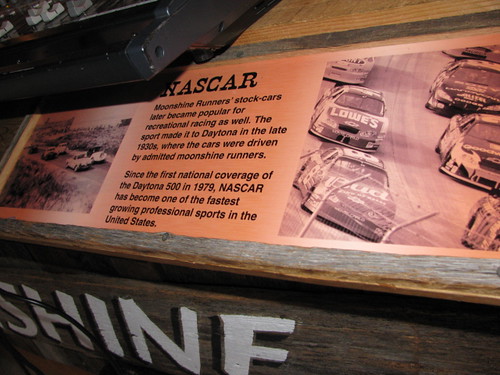 Also on the positive side of the ledger, unlike Jack Daniels (in a dry county), they did actually have free tastings!  They had their straight, un-aged corn whiskey, the White Lightning (filtered six times), and apple-shine.  For dessert, you were offered some of their booze-soaked moonshine cherries!  Taste-wise, it was definitely better than the knock-off ‘shine I’d picked up in a BevMo a while ago.  We actually enjoyed all the samples, but none of them are the kind of thing we would have sipped regularly, and the prices were a bit—pricey.  We actually really wanted to get some jars of moonshine cherries to give as gifts for some of our friends, but unfortunately, they only sold them in 750 ml jars for about $30!  Had they had much smaller jars in the $10-$15 range, we probably would have picked up several, but that was way too much (money and cherries) for something we considered more of a novelty item than anything else, so we passed.   In their partial defense, they suggested that they were heavily regulated in how and what exactly they sold in the store, so it may have been standard bureaucratic bullcrap that prevented more cost effective shine souvenirs. 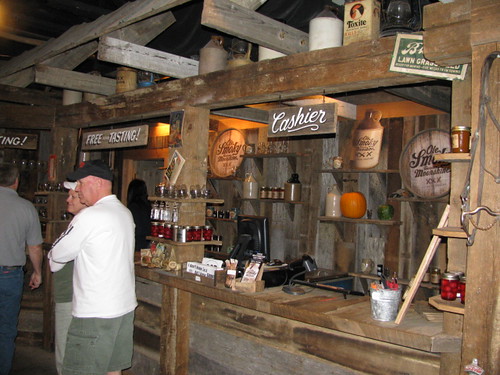 We did get souvenirs of the non-boozy sort there in the gift shop, so we didn’t leave totally empty handed.  There was a nice selection of shirts, hats, mugs, shot glasses, and various sauces and marinades that used ‘shine in the ingredients.  And I supposed if we’d changed our mind later, we could have ordered the stuff at their online store, but the prices aren’t any better there than in the store.

From there, we headed back out into the crowded, tacky street, where their annual chili cookoff and Christmas lighting was about to start, but that’s a disappointment for a different blog post… 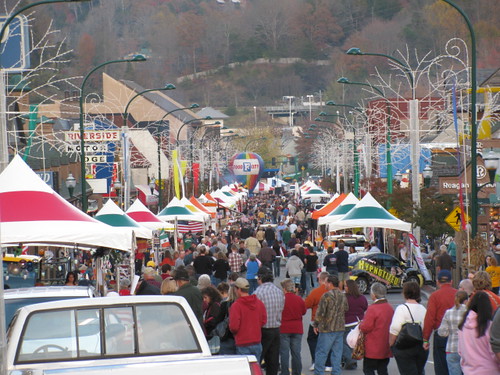 Streets closed for the chili cookoff. As you can see in the background, Gatlinburg is surrounded by beauty, but we weren't too impressed with the town itself.

In short, we’re still glad we went, and while it isn’t a destination to plan a trip around like Jack Daniels or Maker’s Mark was, if you find yourself in Great Smoky Mountains National Park, and/or trapped in the Gatlinburg/Pigeon Forge area (as millions are every year), it is worth the trip.  And had we not already seen the distillation process in two bigger, more professional settings, we probably wouldn’t have been quite as jaded as we were, and may have been more impressed.  But you definitely don’t have to set much time aside to see the place, and it is/was still fun to tell everyone that we got to see and taste at the first legal moonshine distillery in Tennessee! 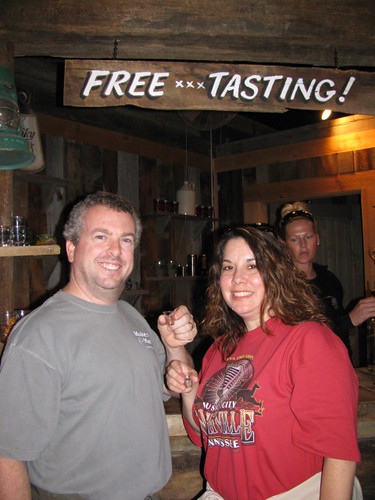 Tourists? Us? Those are definitely not souvenir shirts we'd bought at Makers Mark and Bass Pro during earlier stops on our trip, cuz that would be totally tacky...

The Taste Place is a food blog published by husband and wife Jeff and Colleen Greene -- serving up recipes, reviews, tips, techniques, and experiences since April 2009. The … END_OF_DOCUMENT_TOKEN_TO_BE_REPLACED