You are here: Home / In the Kitchen / Spicy (sorta) BBQ (kinda) Beans! 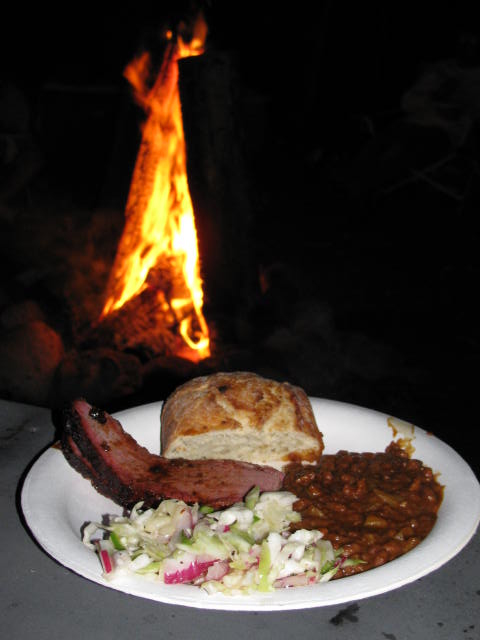 If you read my posts here on The Taste Place often, you will have noticed that I’m a big fan of barbecued and smoked meats.  And as much as I’m a fan of meat and have difficulty calling a meal a meal unless meat is prominently featured, I’m no barbarian–Good bbq needs good sides!  The most classic bbq sides are probably beans, cole slaw, macaroni and cheese, watermelon and corn bread.  Any two or three of those will work, but if all five are offered, I’ll probably pile them all up on my plate.

God and our farmers are in charge of watermelon, Colleen has previously mastered an excellent macaroni and cheese, and I’ve already posted about my buddy Mosley’s awesome jalapeno corn bread muffins, but until this past summer I hadn’t really found a recipe for beans or slaw that I was happy with.  Both dishes vary wildly from place to place and recipe to recipe, but the beans and slaw can clearly make–or break–a bbq meal.

I tried an Emeril recipe for “Slow-cooked Bam-B Q Baked Beans” for a 4th of July party a couple of years ago, and it was a disaster.  The dish started with dry beans, and I must have made a mistake along the way (perhaps by soaking them overnight first?), but the liquid was never absorbed, and they were not ready to be eaten until well after the party was over!  I do blame myself, rather than Emeril, as I’ve been happy with almost every other recipe of his we’ve made, but when it came time to make some beans again, I decided to look for something a little bit easier–especially since I’d be cooking outdoors in a dutch oven over an open fire, bbq, or at best, a propane stove.  Furthermore, failure to provide good food at a Hoot is never an option, as the ridicule and taunting can last for years.

In preparation for last summer’s camping, fishing, shooting, eating and drinking extravaganza known as the Hoot in the Hills, I found myself in the role of sous chef, doing the sides for my buddy’s main course smoked brisket.  After some lengthy research into various styles and types of bbq beans, I settled on a recipe I found over at TexasBarbeques.com.  It seemed like the quintessential Texas BBQ meat deserved beans done in a spicy Texas style, and I liked that the recipe marked the proper balance between simply opening up a can from the store and an over-the-top gourmet dish.

The results were excellent at the Hoot, and I have since made the dish again here at home, to ensure they were as good as I thought, and not just a beneficiary of the clean air and good times of our annual camping trip.  I also found that the recipe as written wasn’t particularly spicy for anyone but the most sensitive palate, but that can be (and has been) adjusted, and if you’re worried about calories and such, you can cut the bacon and bacon grease a bit.  And though it is called bbq beans, and I have done it on an open fire, it works perfectly well on the stove top as well. 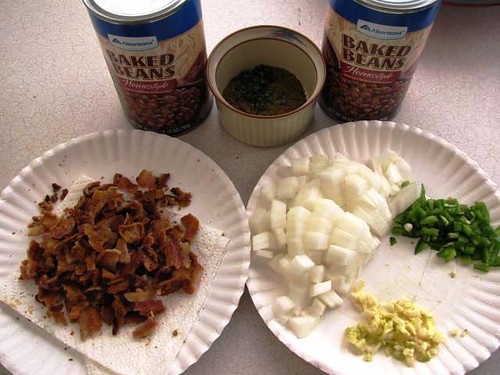 Not much to it–beans, spices, onion, garlic, pepper, and bacon! 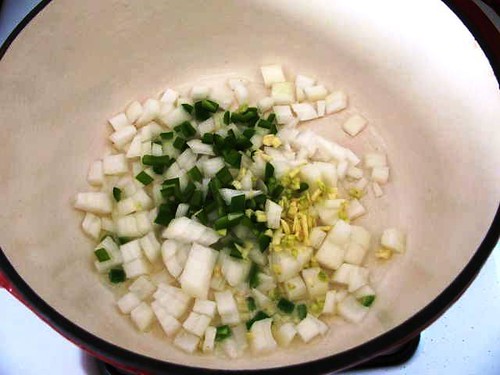 Onions, peppers, and garlic cook in the grease from the bacon 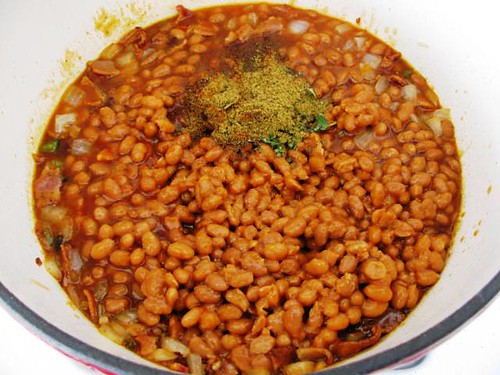 Dump the bacon, beans and spices onto the cooked onions, peppers and garlic, then simmer until you think it is ready! 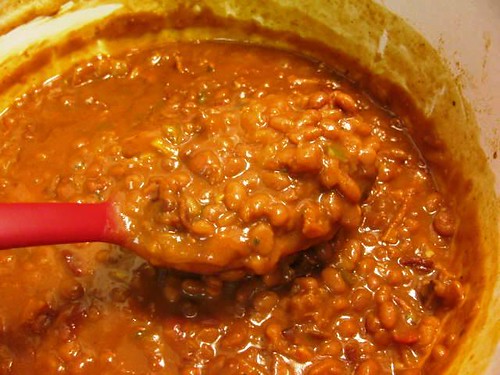 Bean are done! Flavors and textures are nicely mixed after a couple hours on simmer, but you could get a way with significantly more or less time if you wished

Source: Modified a bit from TexasBarbeque.com)

Note 1:  For camping, I pre-mixed the spices in a resealable plastic bag ahead of time and also pre-diced, chopped and bagged the onions peppers and garlic.  Made prep a breeze in camp!

Note 2:  You can really do this in any pot, but if you’ve made this in a dutch oven, whether plain cast iron or porcelain covered,  it will easily stay warm for a trip to someone else’s bbq across town.

The Taste Place is a food blog published by husband and wife Jeff and Colleen Greene -- serving up recipes, reviews, tips, techniques, and experiences since April 2009. The … END_OF_DOCUMENT_TOKEN_TO_BE_REPLACED