You are here: Home / Out & About / Eating in Wears Valley, Tennessee — Or trying to, at least! 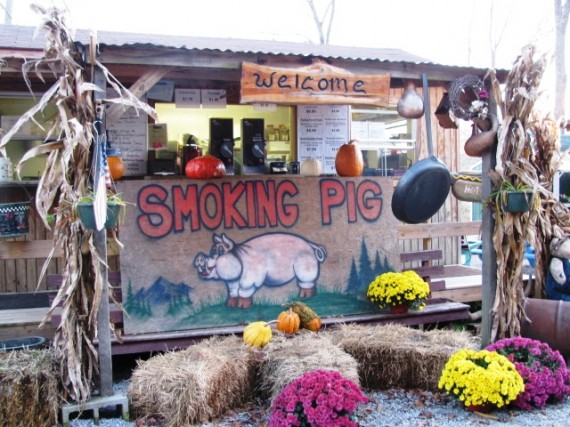 We split our recent trip to Tennessee between the Nashville area (see Eating on Music Row, Touring Jack Daniel’s Distillery, and the Bourbon Trail) on the western end of the state and the Smokies on the east end.  We chose beautiful Wears Valley as our base camp, right at the edge of the Great Smoky Mountains National Park, but outside of the terribly tacky touristy areas in Gatlinburg and Pigeon Forge.  The upside was that it was that it was a beautiful little community, very peaceful and had some amazingly reasonably priced cabins.  The downside was that there were not a lot of options for food (or anything else!) after 5pm mid-week! 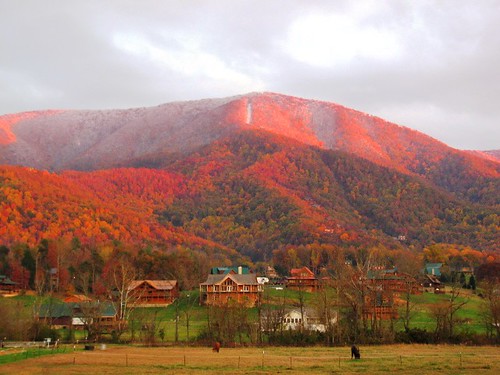 Believe it or not--it was even prettier in person! This was taken right at sunset as we pulled into town.

Other than the better scenery and serenity, one of the reasons we prefer cabins to hotels is that we have our own kitchen, so we can largely cook our own meals.  But we did have a couple evenings where we knew we were going to be coming home late or too tired from hiking to make a meal, and we do like to sample local fare, so there were a couple nights we planned to go out. By the way–we were very smart to have shopped in Nashville for groceries before we left, as there was not a decently stocked grocery store in town, and Gatlinburg was the nearest liquor store!

The foodie cultural experience we really missed out on was our first night in town.  We went straight from the cabin rental office to our cabin, and cooked dinner at home.  The next morning (a Sunday) we went to the charming little Wears Valley First Baptist Church, where we learned that we had just missed a community fish fry at the church to kick off their revival week the night before!  The pastor talked about how much Southern Baptists like their food as a form of fellowship (among other things, he told a joke about the school where kids were asked to bring something that represented their religious traditions.  First kid said, “I’m a Catholic, and I brought these rosary beads!”  Second kid says, “I’m Jewish, and I brought my yarmulke!”  The third kid walks up and says, “I’m Southern Baptist, so I brought this bucket of fried chicken!”), so we were very sorry we missed the opportunity to break bread with this cute (and extremely friendly) church. 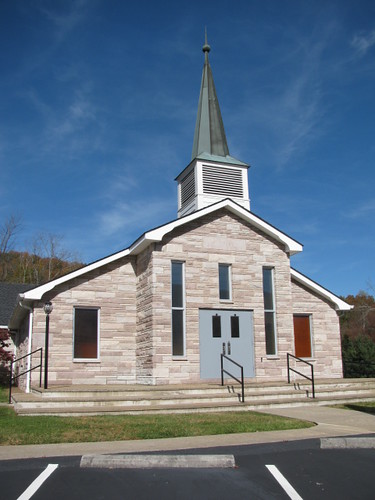 Best food in town? We wouldn't know, as we missed the fish fry, but it was a very nice church nonetheless...

We had noticed in our initial exploration of the town, a Farmer’s Market-looking area at the far edge that featured a big-ass smoker and a sign advertising “Fresh Fried Apple Pies”.  We’d been told by our Nashville host, Stevie, that we needed to have some “fried pie” when we got a chance, and we wound up thinking about it all day the next day.  So after touring and hiking through historic Cade’s Cove in the Great Smoky Mountains National Park on our first full day in the area, we made a bee-line to “Smokin’ Pig BBQ” at Wears Valley Farms, even though we had a whole dinner to cook at home.  But an appetizer was perfectly in line, right? The farmer’s market/store on site was cute, with lots of local squashes and honeys and sauces.  And the fried pie was totally worth whatever rules we were breaking.  If you aren’t southern yourself, and haven’t spent much time there, you may wonder what the hell fried pie is–it’s basically a McDonald’s apple turnover done right!  The crust was flaky, the filling was great, and it was covered with powdered sugar!  Yummy, but not even remotely on any healthy foods list.  But as you’ll see (and already know if you read our previous Tennessee entries), we pretty much threw that “healthy” thing out the window.  On the negative end, we also tried the southern sensation “boiled peanuts”, which we found significantly less impressive, and frankly, as mushy and bad as you might assume.  A friend insisted they’re only really good when they’re in season, but color us skeptical… 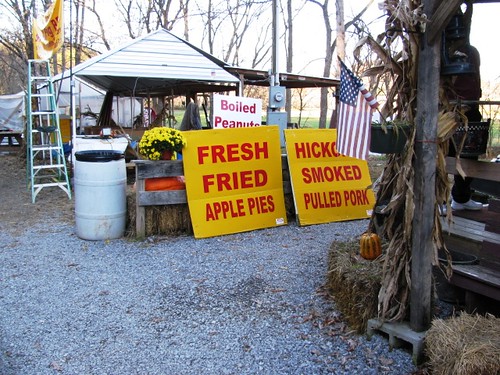 How do you pass up high tech marketing efforts like this? 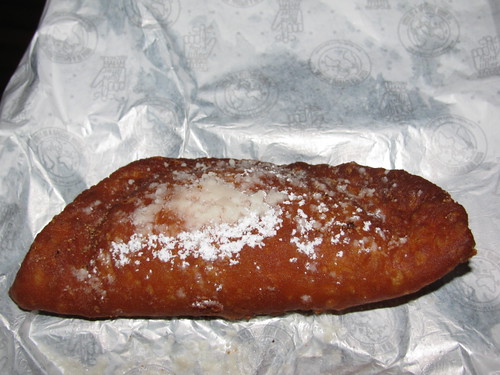 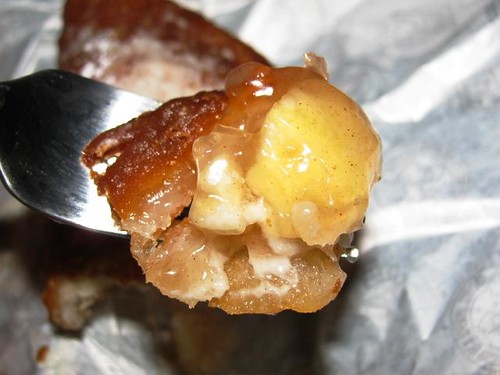 The next day we were heading all the way over the Smokies to North Carolina and back, and was one of or planned “local food” evenings. We were looking forward to having some of the actual bbq at the “Smokin’ Pig BBQ”, after all, they had an excellent looking smoker… 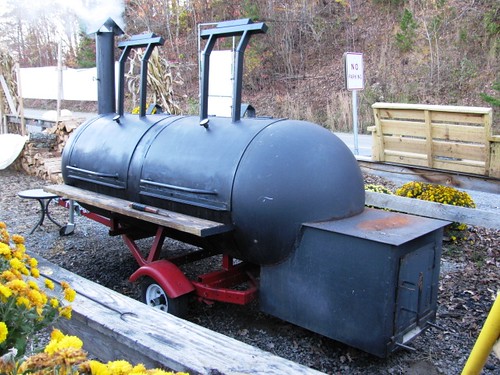 My next smoker upgrade? I'm still sad we never got to actually sample any of the smoked meats at "Smokin' Pig BBQ"

Unfortunately, it appears that the bbq joint closes at 7, or possibly earlier mid-week (it wasn’t really posted), so we were shut out of their pulled pork, ribs, brisket, or any of the other wonderful goodness that appeared on their menu. So we cruised back down the boulevard into town, looking for someplace to eat. And then when we reached the end, we turned around and went back again. We may have made another circuit before we realized that the only two legit restaurants in town were apparently closed for dinner mid-week, and our only options were the “best burger in town” served at the British Petroleum Gas Station, and pizza at the “American Pie Pizza Pies, Sub Sandwiches, Ice Cream and DVD Rentals.” 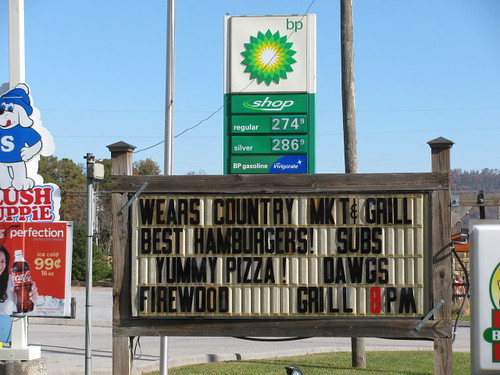 Best burgers in town? Possibly, as we couldn't find any other burgers in town, but in the end we didn't eat here, thinking "burgers" and "British Petroleum" weren't the most appetizing words to be used together 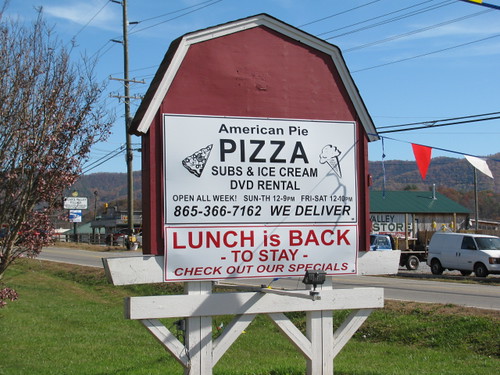 It's pizza, so how bad could it be? Note: We took this and the BP Burgers photo above the next day, but ate their the night before

While the gas station may well literally have had the best burgers in town, as there were apparently no other burger places IN town (no fast food even–another plus and minus for the town at the same time), we decided on pizza and a movie instead. And the pizza was… pizza. Not bad, not great, but edible. The bigger mistake of the evening was our Country Music Hall of Fame-inspired rental of “Walk Hard: The Dewey Cox Story“, which was indefensibly bad. Fortunately, the Gentleman Jack we had back at the cabin was still good, so the evening wasn’t a total loss…

The next day we hiked a small (and snowy) piece of the Appalachian Trail, did another small hike to Laurel Falls (one of the most popular hikes in the park) and explored a historic schoolhouse, so we felt like we’d earned another “appetizer” trip to town before our cabin-cooked meal. We ran back to the Smokin’ Pig again, and cast our greedy eyes upon the menu. 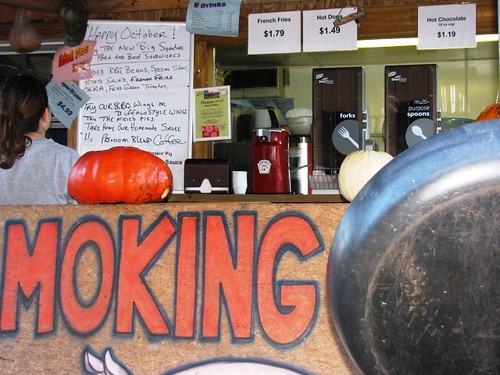 We again had to skip the actual smoked meats (curses!), but picked up fried green tomatoes (our 2nd version of the trip), fried okra, and some bbq wings. 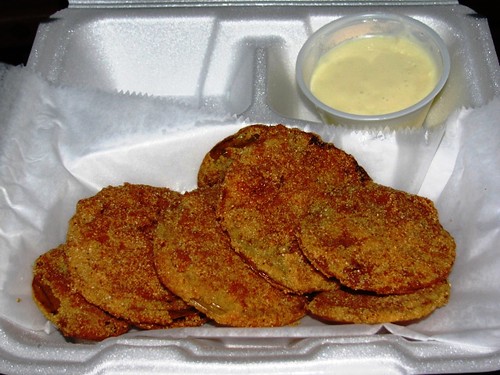 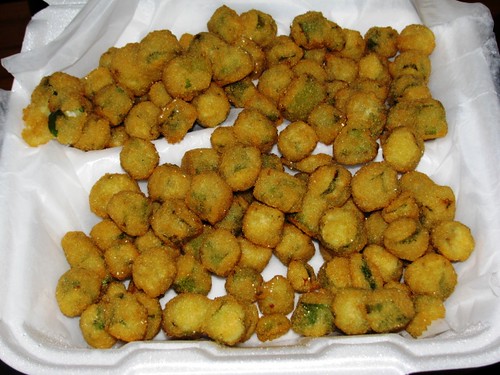 Fried Okra! Too much okra, not enough spice or sauce

Colleen LOVED the fried green tomatoes (I thought they were pretty good), we both thought the okra could have used a more interesting sauce than simple ranch and was rather bland, and the wings were… okay.

So summing up Wear’s Valley food-wise, it is hard to say that it was exceptional in any way. While we missed the Bear Camp Grill, which looked like it was probably the best restaurant in town, it is only open for dinner Thursday through Saturday.  And Grandmother’s Kitchen, a cute little joint on the north end of town that looked like it would have great breakfasts, didn’t appear to serve dinner at all! So while we highly recommend the valley for it’s scenery and serenity, we highly recommend that you get a cabin and bring your own food and beverages! 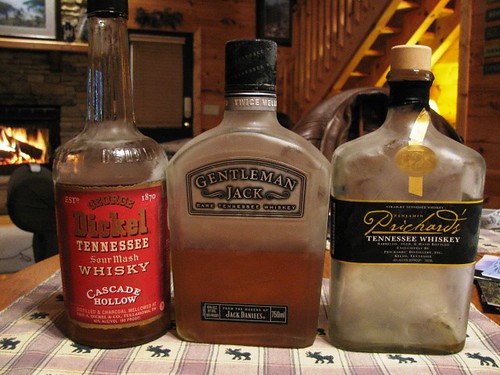 This may have been the best part of our culinary experiences in the Smokies, but you'd better bring your own, because you can't buy any of these in Wears Valley!

You can see more of our eating and drinking adventures in Tennessee and Kentucky here, and check out our hiking and sight-seeing posts from the area on our outdoors blog here.

The Taste Place is a food blog published by husband and wife Jeff and Colleen Greene -- serving up recipes, reviews, tips, techniques, and experiences since April 2009. The … END_OF_DOCUMENT_TOKEN_TO_BE_REPLACED