You are here: Home / Out & About / Dining on Broadway in Downtown Nashville 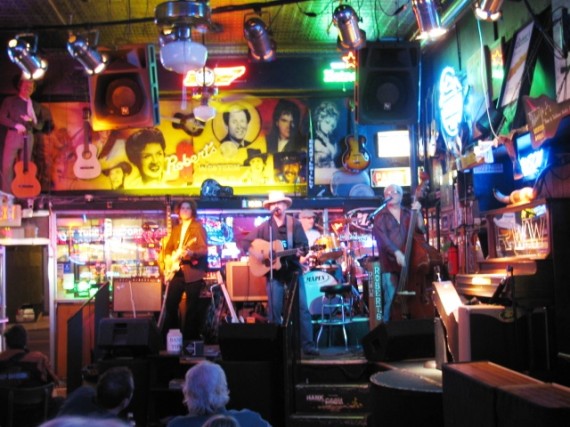 While the planned highlights or our foodie expeditions on our recent trip to Tennessee were planned around going up the Bourbon Trail in Kentucky, Jack Daniels’ distillery in Lynchburg, and the new Moonshine distillery in Gatlinburg,  we actually ate quite well on Broadway in Nashville as well.  I’d heard of Broadway and Music Row for most of my life, but as a country music fan, seeing it in person was great.  There were several blocks worth of restaurants, bars and honky-tonks, with live music coming out of nearly every one of them.  We managed to eat at a few of these, and enjoyed the character of each.

The first night in Nashville, we were going to see Johnny Cougar (or Mellencamp, or whatever he calls himself these days…) at the Historic Ryman Auditorium just a block off Broadway.   Before the show, our wonderful host Stevie and her guy James took us to Merchant’s Restaurant on the Row, located in a 100+ year old building (built in 1892–coincidentally the same year that the Ryman opened) that was once a hotel that served the likes of Hank Williams, Dolly Parton, and Loretta Lynn.  It is actually two restaurants in one, with the upstairs serving fancy expensive stuff, and downstairs serving more informal menu items, wrapped around a very well stocked bar featuring a host of premium bourbons, whiskeys, and a variety of beers, including a few local beers. 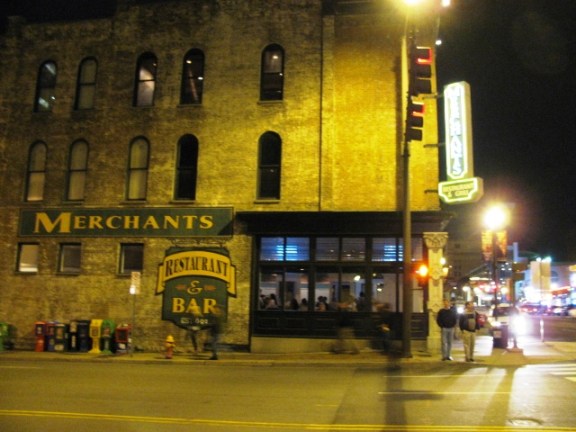 I had the pecan wood-smoked chicken wings with a spicy bbq sauce, ranch dressing, and an Alabama white bbq sauce, which had been on my list of things to find while in the south.  It was good, but not great, though I certainly appreciated the variety of sauces provided.  Colleen had the “fried green tomato blt” sandwich, which she loved.  The star of the show, though was probably the “duck fat fried tater tots”, also served with three different sauces.  I hadn’t had tater tots since elementary school cafeteria lunches, but this was definitely not kid food! 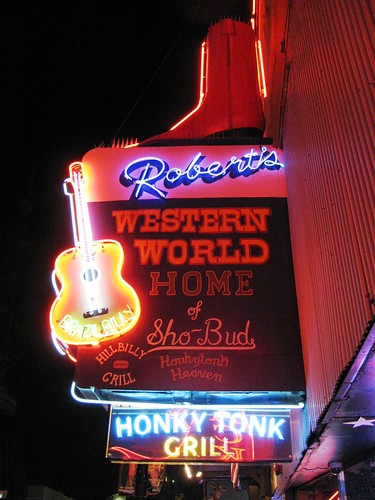 The next night, after our run up to the Bourbon Trail, our gracious hosts guided us back down to Broadway for the expressed purpose of listening to some music and grabbing some grub.  We started at Robert’s Western World, which is a boot and hat store by day, and a honky-tonk hillbilly grill by night!    I wish we’d gotten the name of the band that was playing, but it was fronted by a younger (30’s to 40’s) guy and they bragged that their bass player (an older dude) was the bass player for Johnny Cash!  They did several Johnny Cash numbers, much louder and with more of a rock influence than the originals (th0ugh mixed amongst the rocking guitar solos were several bass solos from the old guy), and they hawked their own cd’s and passed the hat for compensation at intermission, but they were very enjoyable and the place was pretty packed. 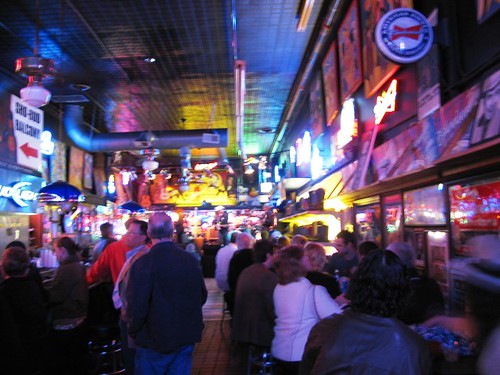 Inside at Robert’s. We sat along the bar at the left.

We were lucky enough to get seats at the bar right in front of the “grill”, which looked suspiciously like the same set-up you’d catch at a McDonald’s .  The menu was strictly bar food, and not great, but probably better from a place as old school as this place looked.  My favorite part was the menu “specials” (not seen on the linked menu above) for a “recession dinner” and a “stimulus dinner”.  One (and pardon me for not remembering which was which) was a cheeseburger, bag of chips, PBR and a moonpie for $5, and the other was a fried bologna sandwich with fries, a Bud, and a goo-goo cluster for dessert.  Or something like that.  I was impressed, regardless.  We had cheeseburgers, fries,  Yazoo Beer (the local beer that seemed to be the only alternative to all the crappy mass-market national beers), and deep fried pickle spears, which our host insisted we try.  The pickles were great, the beer was adequate, and the cheeseburger wasn’t bad, despite the sneaking suspicion that what they threw on the grill was a frozen beef patty.  Perhaps it was just the ambience of the place itself, and its braggable history as a showplace for hundreds of big names before they were big names, but the meal did hit the spot.  As did the music.  If we’d gone home, I’d have felt I’d experienced  what Broadway was all about. 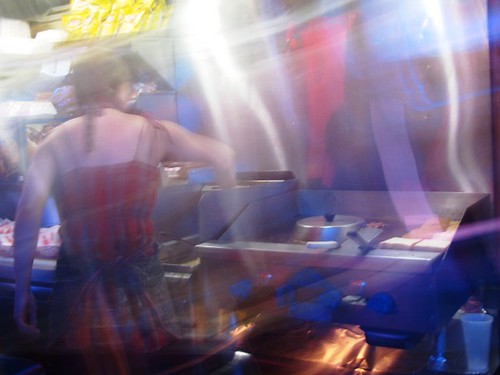 Artsy photo of the high tech kitchen in front of the bar at Robert’s. Or a crappy photo of their crappy little grill. Whatever…

But Stevie insisted we needed to hit Tootsie’s Orchid Lounge, to round out our experience.  We had seen that the Ryman Auditorium was hosting a tribute to Tootsie’s the week we were there, so we knew it was a big deal, but once we entered and saw all the pictures of pretty much every country star that had ever performed up on the walls there (and then later further researched to find out what an institution it really was), we were sold–not that we needed a lot of convincing to have another beer or two and hear some more live music.

The lower portion of the bar, with a small stage in the corner, was quite crowded, and we shared enough of a bar table to set our beers down, but after a few songs by the band that was playing, they took a 20 minute break and passed the hat.  About that time, we noticed that there was another live band playing upstairs!  We headed up there and managed to grab a bar table in the back, as yet another country band (this one fronted by a woman) played a mixture of covers and original songs.  Sooner or later (you sorta lose track at a certain point…) they took a break, too, and the lead singer made her way around the bar with a bucket to collect tips.  While this may seem uncomfortable, we all pitched in, and it struck me that none of the bars with live music appeared to be collecting a cover charge on a Thursday night.  Perhaps it is different on Friday and Saturday, but we were very impressed by the variety of entertainment available there on Music Row for free–or for as much as your conscience bid you to pay, at least.  The beer list seemed as bad as the one at Robert’s , but since I wasn’t paying, I didn’t protest… 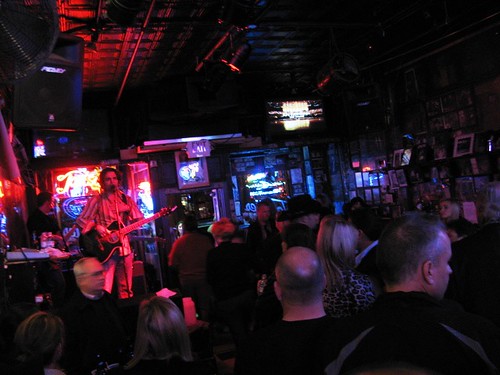 The tiny little stage downstairs at Tootsie’s. You can see some of the pictures of historic artists who have played there along the walls. 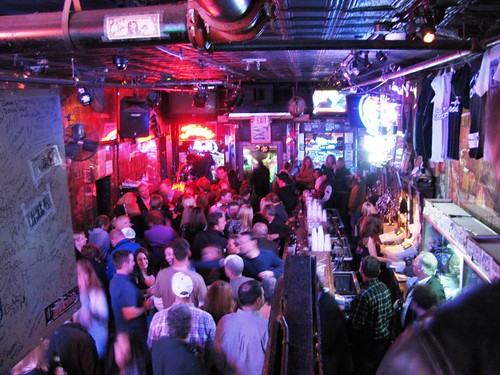 The next day was our last to play in Nashville.  After a morning spent at the Country Music Hall of Fame in downtown Nashville and a quick run down to Lynchburg for a tour of the Jack Daniels Distillery, we were hungry for some bbq, and we’d seen a place back down on Broadway we wanted to check out.  We’d caught a whiff of the tasty-smelling smoke from Rippy’s Smokin’ Bar and Grill the very first night as we had left the concert, and it was right across the street from Tootsie’s and Robert’s, so it was an easy call. 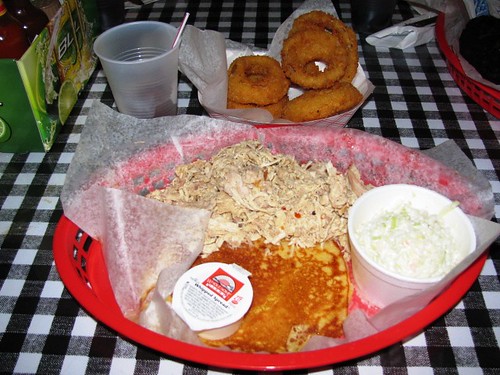 In warmer weather, much of the upstairs is open air, but it was shuttered in on the night we were there.  We ate upstairs, while a musical act set up downstairs.  We ordered some onion rings as an appetizer, and they were good enough to have made a meal out of them alone!  Colleen was trying to behave, so she ordered the smoked, shredded chicken, with cole slaw and cornbread pancakes (a southern “must order”, we’d been told).  I had the ribs, beans, and slaw, and was very pleased.  We enjoyed listening to the live music coming up from downstairs and enjoyed the food.  Portions were good, reasonably priced, and all of it was tasty.

If we’d done a bit more research ahead of time, we might have ended up at the Neely’s Bar-B-Q a few miles north of there, but we figure we’ll just save that for our next Tennessee trip when we head west to Memphis instead of east to the Smokies…

Our final discovery of the three days on Broadway was either the lamest or awesomest idea ever–and the more we thought about it, the more we liked it. 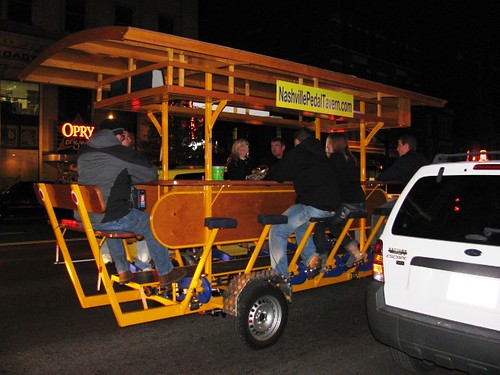 “NashvillePedalTavern.com” Awesome or lame? You be the judge!

That’s a picture of the “Nashville Pedal Tavern“, right there, but the true genius of it is only obvious when you see the video clip here:

Available to take for pub crawls up and along Music Row, or to cruise the tailgates at a Titan’s game, or even to rent for yourself with a group of up to 16 friends to set whatever itinerary you want! But alas, our time was up in Nashville, so we’ll just have to save that for another day…

The Taste Place is a food blog published by husband and wife Jeff and Colleen Greene -- serving up recipes, reviews, tips, techniques, and experiences since April 2009. The … END_OF_DOCUMENT_TOKEN_TO_BE_REPLACED