You are here: Home / Out & About / Touring the Maker’s Mark Distillery in Kentucky 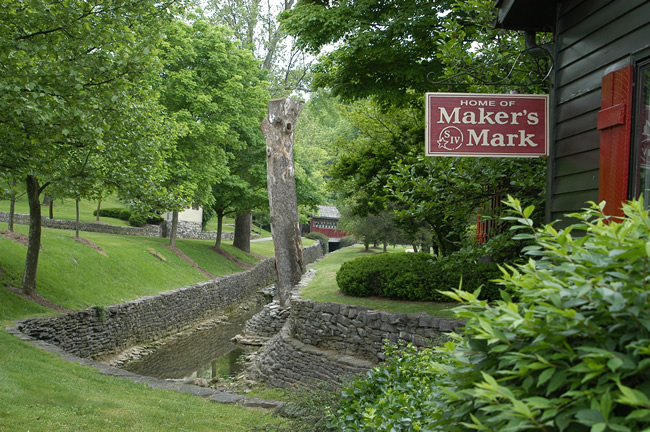 When TTP co-conspirator Colleen and I traveled to Nashville, Tennessee to visit our friend Stevie recently, the first side trip on our agenda was to head to Kentucky and hit the Bourbon Trail.  Bourbon is the liquor of choice for both of us, and we have a bourbon and (diet) Coke nearly every night as part of our chill time on the couch.  Since we’re mixing it, we usually just drink the cheaper name-brand stuff–Evan Williams, or maybe Jim Beam if it is on sale.  But on those rare occasions when we are entertaining those with a more sophisticated palate, or we just feel like a nice slow sipping bourbon, we’ll go for a finer label–Knob Creek, or Woodford Reserve, or Makers Mark.   We’ll also occasionally drink Gentleman Jack, but contrary to popular belief, that (and the rest of the Jack Daniel’s family) is not a bourbon.  More about that later…

There are six “official” stops on the bourbon trail, but we knew we’d be pressed for time, and so we targeted three of the distilleries on the east end of the trail:  Jim Beam, the biggest of the bourbon names; Heaven Hill, where Evan Williams is produced and the location of the Bourbon Heritage Center, and Maker’s Mark, our favorite “premium” distiller, which also had a reputation for having the nicest looking facility.  All offered free tours and tastings.

But a funny thing happened on our way to the distillery.  First, we slept in a bit, after a long day of traveling from Southern California the day before and catching John Mellencamp in concert at the Ryman Theater the night before.  Then we decided to stop at Cracker Barrel for a hearty Southern Breakfast before we hit the road.  And as we drove up scenic Highway 65 from Nashville, admiring the Fall foliage, we spotted a sign advertising Abraham Lincoln’s Birthplace right off the highway!  Since we’re both history geeks, we decided we had to take the detour to check out Abe’s childhood home (which it turns out, isn’t really his home, but that’s another story…).  It was very cool, and we checked out the museum and did a quick hike, and then jumped back in the car. 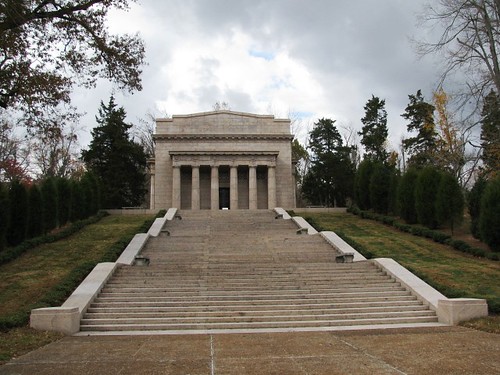 It was about that time that Colleen noticed that her phone was prompting her to change her time zone.  I’d had a similar request on mine earlier in the day, but had dismissed it, assuming my Blackberry was still confused by the shift from California to Tennessee.  After all, we’d just headed due north from Nashville, and time zones all run vertically, not horizontally, right?  But now we started to worry that there was something to this, and that we suddenly had an hour less time than we thought we did.  So we called one of the distilleries to confirm what time they closed and what time it actually was, and learned that Kentucky was, in fact, an hour ahead of Tennessee!

That meant it was now 2:30, and we were still an hour away from the distilleries.  Maker’s Mark had their last tour at 3:30, Beam at 4:30, and Heaven Hill at 5.  We realized that meant that, at best, we could hit two, and possibly only one.  We decided that if we tried to make it to Maker’s Mark in time for their last tour (no sure thing), it was possible that we could also make it to Heaven Hill before they closed, and since there was no way to do Beam and one other, and the distillery we most wanted to see was Maker’s, we stomped on the gas and blazed through the beautiful Kentucky countryside, hoping to make it by 3:30. 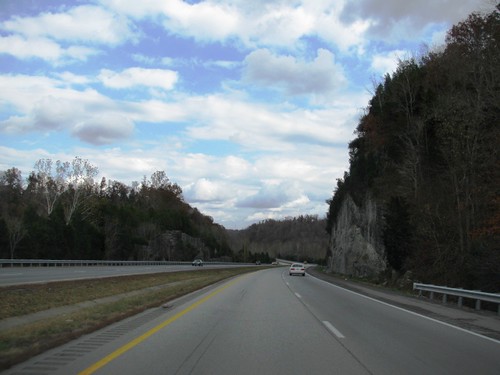 A picture of the scenic highway headed into Bourbon Country, captured at a speed somewhat higher than that recommended by the Kentucky State Police

Unfortunately, while the most obvious turns off the major roads and highways had very visible signs to follow, the less obvious roads and turns were frequently completely unmarked!  So we made a few errors, even with our various mobile apps trying to tell us where to go in the car.  But with a little bit of luck and my mad driving and navigational skillzzz, we pulled into the Maker’s Mark parking lot at 3:29, and were standing in their lobby waiting for our tour to start at 3:30!

The setting was indeed great.  Surrounded by hills and trees, and a quaint little creek (Whiskey Creek, from which they apparently get the water for the bourbon!) running through the middle of uniformly painted black buildings with red trim, they clearly had put a lot of thought into the look of the facility.  After a few minutes of waiting, we were on our way with about 15 or so other tourists and a tour guide who reminded me a little bit of the skinny guy from the old Bartles and Jaymes commercials. 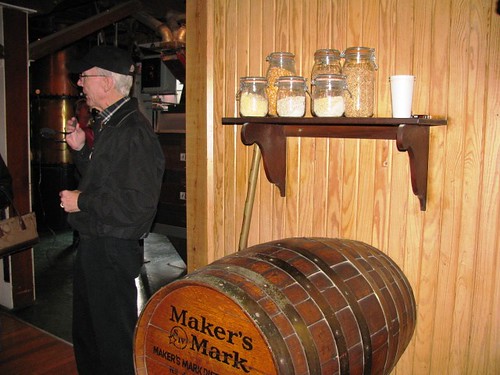 It’s that Bartles guy! Or Jaymes! Whichever, he’s doing a damn fine job as a tour guide at Maker’s Mark

It really was an excellent tour.  He began in the lobby of their Heritage Center, where he went through the family history of the founders and how the oldest bourbon distillery was abandoned, re-opened, and then re-purposed to make premium bourbon (apparently the founding father of the company didn’t like the bourbon they used to make!).  He also explained that the name “bourbon” could by law only be applied to whiskeys made in Kentucky, which is why Jack Daniels, made in Tennessee, is not a bourbon.  When we toured Jack Daniels in Lynchburg, TN the next day, they were equally proud there to be called “Tennessee Whiskey”, and not bourbon, though there are many bartenders who will still bust out a bottle of Jack when you ask for a bourbon and coke.  Really, technically, there isn’t much more difference between them than there is between Coke and Pepsi, but both sides are quite proud of their labels, so don’t make that mistake around them!

Because they were getting ready to end their shift, we actually started at the end, where they were bottling, labeling, and dipping the bottles into their trademark red wax.  It as cool to see it done in person as the bottles themselves look on the store shelf.  They moved so fast, that it was hard to get a good picture of the actual dipping, but this is sorta what it looked like: 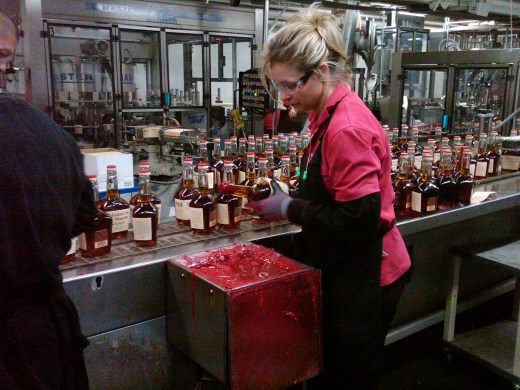 Wax dipping before (or during)… 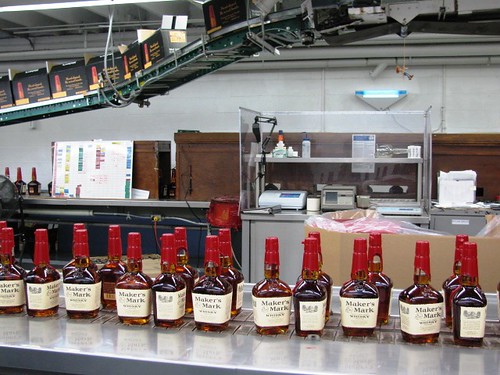 …And wax dipping after!

They then took us back outside to start at the beginning.  As we walked across the grounds, the smell of fresh bread caught our noses, and soon we entered the building where the mash was being made.  It did indeed include corn, wheat, and malt (barley), which accounted for the bread smell. 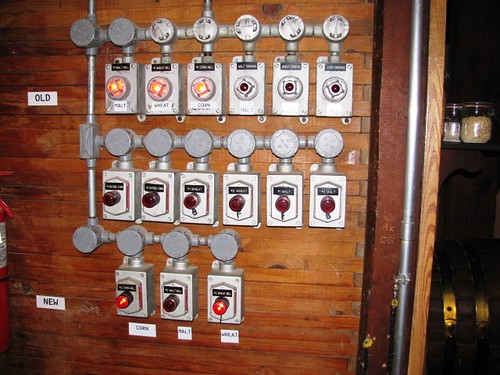 This apparently controls everything. Though based on the labels and form of the buttons, it may control nothing. Cool, nonetheless.

We also were able to see the giant barrels where the mash was fermenting, and were even allowed to dip our fingers into the mix to taste the “brewer’s beer,” which is basically the pre-distilled alcohol mix.  It did taste a bit like a sour beer. 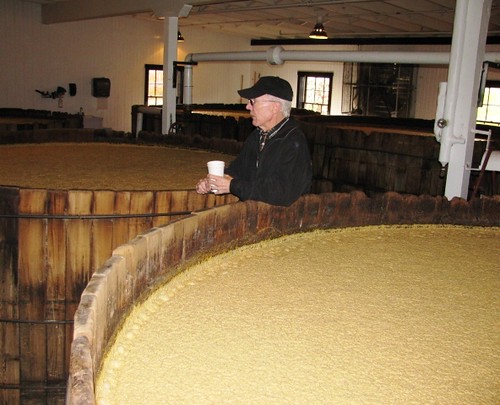 Yup. We stuck our hands in that and tasted the “brewer’s beer”. Don’t worry, Colleen made me wash my hands at least once that day…

This is where the clear, distilled alcohol comes out of the still and into storage to be aged in the barrels. 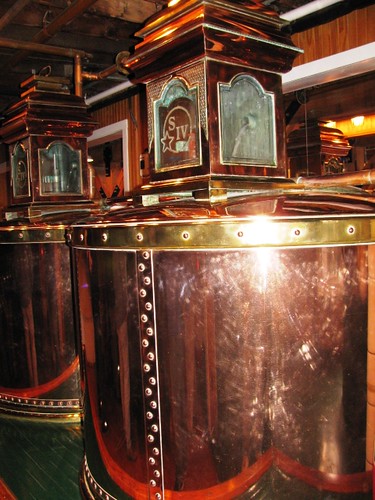 We spent a lot of time in the barrel room, where they explained how important the construction, charring, and storing of the barrel was to the final taste of their bourbon, and how carefully they selected the wood and oversee the entire barrel-making process.   This is also where they explained how they determined when the bourbon was ready to bottle–not by date, but only by a set of judges who taste each barrel, and will not approve a barrel to be bottled until all the judges agree that it is ready (between six and seven and a half years).  Interestingly, they said that all of their judges were women, as they seem to have a finer taste for impurities and smoothness. 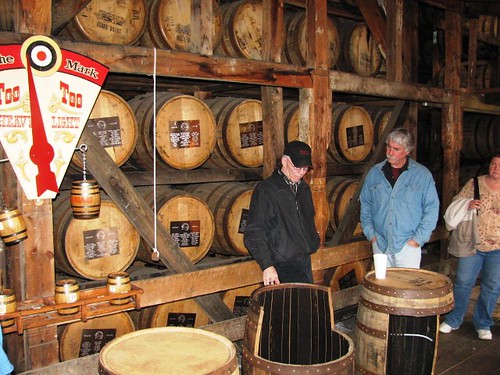 After this it was on to the tasting room, which was really a very modern looking bar. 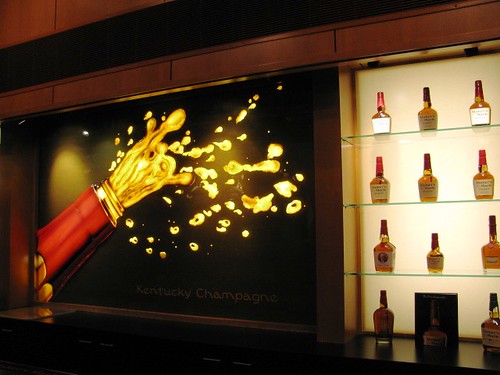 Modernistic bar–I’d have preferred something a bit more rustic

There we were given free tastings of the standard Maker’s Mark, and their brand new super-premium “46” brew, which is put into new charred barrels and aged an additional 2-3 months after it would otherwise have been ready to sell.  Both were very nice, but the new “46” was definitely smoother. 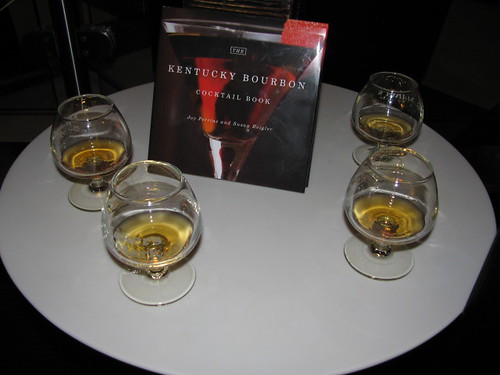 Afterwards, we were all given a piece of Maker’s Mark’s bourbon chocolate truffles and turned loose on the gift shop, where we spent enough to make the concept of a “free” tour somewhat laughable.  In the end, we decided not to buy a bottle there that we could then hand-dip ourselves, as it seemed silly to pay extra to dip the wax to simply drink it, and we really don’t have anywhere it would be appropriate to save and display it forever, either.  So we got a shirt and a travel mug and some bbq sauce and a shot glass and probably something else I’ve forgotten and bid the distillery adieu. 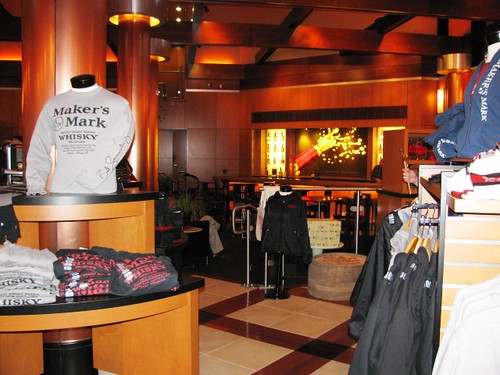 It was unfortunately 4:30 by then, and the directions we were given by the cashier to Heaven Hill said it would take us 45 minutes, and rather than risking personal safety and the attention of the local constabulary trying to make it by closing time, we just headed on back to Tennessee. 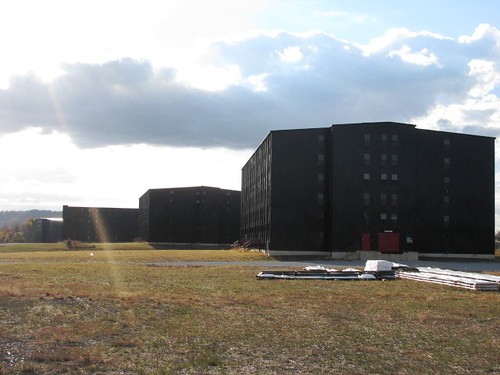 We saw these buildings just outside of town and thought maybe it was some sort of prison, or juvenile justice facility, or???? Turns out they are the barrel storage buildings for Maker’s Mark! 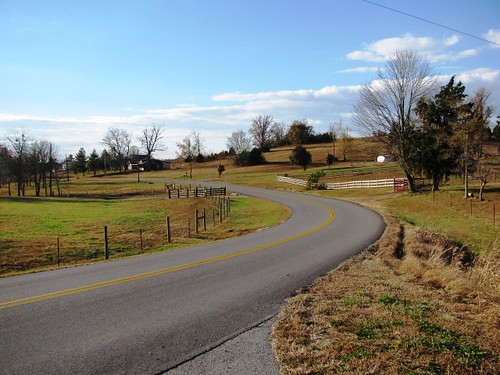 This is what a lot of the road to and from the Bourbon Trail looked like. Beautiful.

We took another scenic back way out, and happened to pass by Lincoln’s school and boyhood home at Knob Creek (which is another of our favorite bourbons, but sadly not located at the boyhood home), not far from the birthplace, necessitating yet another history geek stop. 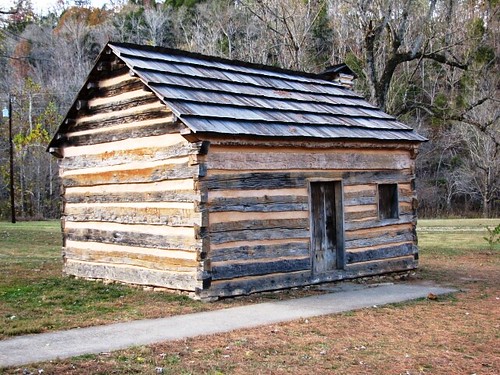 We really enjoyed the Maker’s Mark tour and learning more about the history of their bourbon and seeing how it was all made.  We were sorry we missed seeing Beam and Evan Williams, but I guess that just means we’ll have to go back in the future!

The Taste Place is a food blog published by husband and wife Jeff and Colleen Greene -- serving up recipes, reviews, tips, techniques, and experiences since April 2009. The … END_OF_DOCUMENT_TOKEN_TO_BE_REPLACED