You are here: Home / In the Kitchen / Smoking Meat–It’s Time You Tried It Yourself 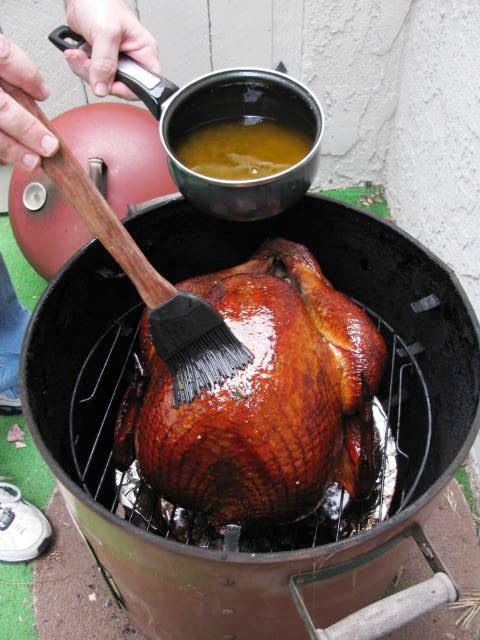 Many of my favorite meals now feature smoked meats as the centerpiece, but I have largely refrained from blogging about them because if you don’t already have a smoker or know how to improvise a smoker on your Weber kettle bbq or gas grill, then my directions won’t mean very much.  And since very few people do, I thought it would be fairly pointless to post those recipes.

But really, it is remarkably easy to do if you have the right equipment, and the right equipment is really easy enough obtain that I’ve determined that y’all should just suck it up and get smokers, too, so you can do some of the awesome dishes that I’ve been doing on mine!

So this is intended to be a primer on some of the basic tools and techniques you need to have and know.  Because while it is possible to get smoke taste on your Weber or gas grill, it is worth it to have at least a basic smoker on hand.  And if all you have is a gas grill today, most smokers can also serve as a charcoal grill when you want a little extra flavor for your meat.

The easiest and cheapest way to start smoking is with a barrel style charcoal water smoker like this here: 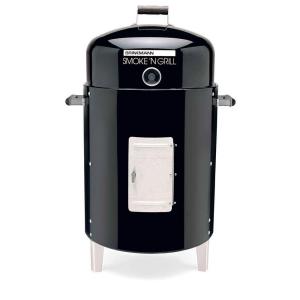 You can pick one up for less than $50 and it doesn’t take up much space on your patio.  With this starter smoker, you can easily do salmon, pork loin, ham, and chicken, which are some of my favorites.  You can even do a turkey up to ten or twelve pounds, which I’ve done with great success several times.

Charcoal tray on the bottom, water tray barely visible above, and then two racks of scrumptious meat on top!

The set-up makes it nearly foolproof.  As you can see in the diagram, the charcoal pan sits on the bottom, with a pan for water right above it, and the food racks/grills above that.  The fire from the coals creates steam inside the smoker that helps keep the “low and slow” cooking process from drying the meat out and makes it nearly impossible to burn.  At a minimum, your margin for error is much larger than you get on direct flames or even on a stove top.  In fact, you’re much more likely to undercook a piece of meat on a smoker than overcook it, as the temperatures are lower than just about any other cooking style, and it requires some patience on your part (and often a decent meat thermometer).

If you have more space and more money, and want a smoker that will do multiple racks of ribs or a bigger turkey, or a whole brisket, or 100 breakfast sausages or atomic buffalo turds, then you can go for a smoker with an offset firebox like I convinced my wife to get me for my birthday this year.  It looks something (exactly) like this: 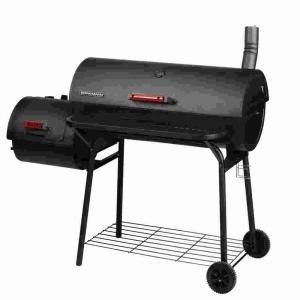 My awesome birthday smoker! Offset firebox is the smaller compartment on the left, cool chimney on the right, main cooking chamber in between.

You can go way more expensive than mine, and there are some unbelievably awesome smokers on the market, but for a little over $100, you can get one like  mine with 1200+  AWESOME SQUARE INCHES OF COOKING SPACE that will let you cook enough meat for just about every friend you’ve got.  You can also use this style as a direct charcoal grill and do  20 or more hamburgers or chicken breasts/thighs at once for a large party if you so desire.  Plus, it has a chimney, which your non-chimney-bbq-owning friends will totally envy.

There are a variety of smaller firebox smokers on the market as well if you don’t have the space or just can’t rationalize that much grill area for your needs, and one of those will cost less than $100 at a Wal-Mart or Home Depot type place.

To smoke meat in these, you build the fire with coals (or even with straight wood chunks if you’re hardcore) in the small firebox, and put the meat on the grate in the larger smoker chamber.   You still should put a water pan next to the opening between the firebox and the smoker chamber to reduce the likelihood of drying out the meat, but it isn’t quite as effective as the upright water smoker, so be careful with long-smoking lean meats.  The offset firebox makes it easy to add more coals or more wood chunks/chips, and if you have a meat thermometer with a wire probe, you don’t have to peek at the meat at all while cooking, which is a big deal, because every time you lift the lid on the smoker, you lose significant heat–estimated at up to a half hour’s worth of cooking time.

Some of the smoking experts recommend against mopping or basting the meat on any smoker for this very reason.  They suggest you trust the smoking process and the taste of the meat itself to do its job, and to interfere as little as possible.  The smoke itself really does impart much of the flavor, so while you can use a marinade or a sauce, more often than not, I’ll just use a dry rub on the meat and let it go.  I might put a sauce on at the end for ribs or a brisket, but it really isn’t necessary. This is why something that you can say you cooked for 8-10 hours and tastes unbelievably good can also be unbelievably easy–they don’t have to know how little work is actually involved. 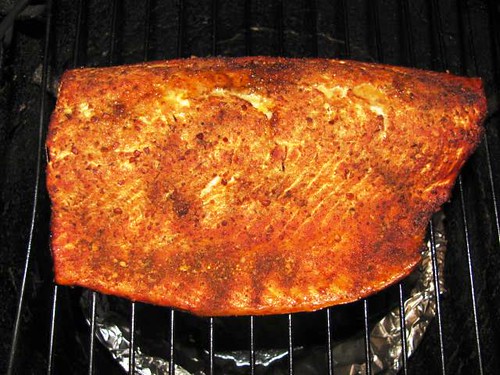 Smoked salmon--one of the easiest and tastiest dishes to do! Plus it will allow you to make my tasty smoked salmon dip whenever you want!

Low and slow is the way to go when you are smoking meat.  A rule of thumb I’ve seen says to expect something to take four times longer to cook on a smoker compared to straight grilling or baking.  That doesn’t mean it can’t still be relatively fast.  Something like a salmon can take as little as an hour or so of cooking time and will impress whomever you wish to impress.  Breakfast sausages will take about two hours, pork loin will take 2-3 hours, ribs, ham, or a chicken takes 4-6 hours, and brisket, pulled pork, or turkey will take somewhere between 1 and 1 1/2 hour per pound (often 8-12 hours).  But once you’ve rubbed your meat (get your mind out of the gutter!), you really have very little to do other than add coals and wood chunks every hour and a half or so (and the wood chunks really only the first 3 hours generally).

While I intend to post some of my favorite recipes over the next couple of months, I recommend you find a good book on smoking  to get you started.  Two of my favorites are the Cook’n Cajun Water Smoker Cookbook, which appears to be out of print but is still available, and Smoke and Spice: Cooking with Smoke, the Real Way to Barbecue.  The Water Smoker Cookbook does the best job of explaining how to cook in the barrel-style water smoker, and is where I found my favorite ham and turkey recipes, but I’ve never been disappointed with a recipe I’ve tried from either one.  There are a variety of online experts as well, several of which I’ve already linked to above, including AmazingRibs.com, who has lots of interesting articles, tips, and suggestions for smoking and grilling. Our favorite local Pitmaster, Neil Strawder from BigMista’s BBQ has said in various interviews that he learned many of his techniques online at the BBQ Brethren forums.

Playing with the various wood options is another favorite past-time for the geeky experimental smoker chef.  The easiest and most available woods are mesquite and hickory.  Mesquite is great for grilling steaks and seafood and even chicken, but for smoking, it can be a bit too strong and overwhelming for anything other than brisket.  Hickory is a nice general purpose wood for almost anything you want to do, and if you can only get one wood, this is probably the one you want.   But if you have options, I like alder for salmon, apple for chicken, pecan for pork, and oak for tri-tip.  I prefer chunks to chips, as they are easier to use, but either are acceptable.  If you use chips, I recommend soaking them for 10 minutes or so and putting them in a smoking box or an aluminum foil pouch.  Most folks recommend soaking chunks as well, but the Amazing Ribs guy I mentioned above suggests it is unnecessary, and I’ve used his method with some success lately. 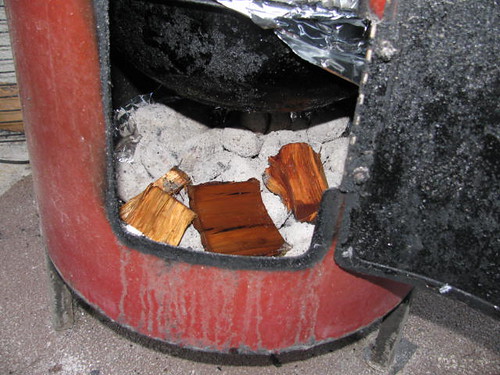 Wood chunks added straight onto the coals in this water smoker

In my initial experimentation over the past few months, the firebox smoker seems to work better for extra long smoking meats, like brisket or pulled pork, because it is easier to keep adding more coals than it is in the standard water smoker.  It also obviously has more capacity if you want to do a lot of meat at once.  But for stuff that doesn’t take long to cook and is easy to dry out, like salmon or pork loin, I still prefer my charcoal water smoker.  Colleen may or may not have been dismayed that I insisted on keeping both smokers (plus my gas grill, for quick cooking brats and other meats and vegetables), but hey, variety is the spice of life, right?

So get one, or both (Christmas is right around the corner!), and play with smoking your meats a bit.  I promise you won’t be disappointed, and I promise I’ll share some of my favorite easy smoking recipes here over the next few months.

The Taste Place is a food blog published by husband and wife Jeff and Colleen Greene -- serving up recipes, reviews, tips, techniques, and experiences since April 2009. The … END_OF_DOCUMENT_TOKEN_TO_BE_REPLACED