You are here: Home / Out & About / Torrance Farmer’s Market–Worth the Trip! 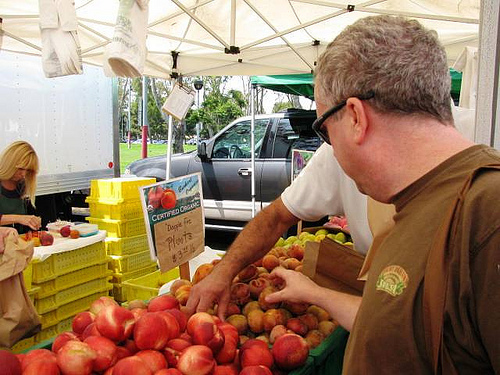 Regular readers of The Taste Place know we like to eat fresh and eschew cans and frozen foods whenever possible.  We are blessed to have very good produce and meat departments at our local Stater Brothers and Albertson’s Markets just blocks away from us.  But sometimes we just want to get things just a bit fresher, so on July 31st, we headed out for another Farmer’s Market—this one in Torrance.

We didn’t pick Torrance at random, of course.  First of all, it was one of the few that we could find that was open on a Saturday morning.  Secondly, we knew our favorite Pitmaster (yes, he’s actually a contestant on the show), BigMista’s BBQ,  would be there, and figured even if the Farmer’s Market sucked, we’d at least get some of the great BBQ we  had sampled several times before.

The good news was, it didn’t suck!  We had done some research ahead of time, and learned that it was the third biggest Farmer’s Market in Southern California, behind Santa Monica and Hollywood.  It was not dog-friendly, though, (most aren’t) so we had to leave Holly behind.

So hard to leave behind!

We’d read that parking could be difficult, and while the traffic on the street was daunting, and the parking lots themselves were a bit chaotic, cars were coming and going fast enough that we were able to find a spot to park pretty quickly. 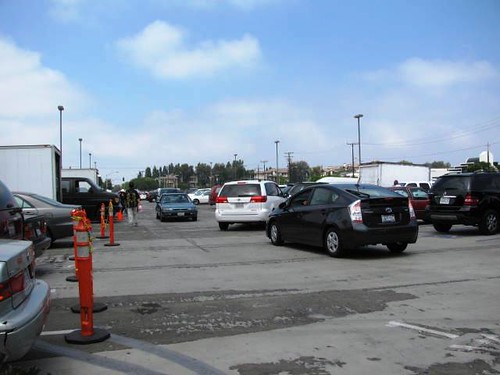 Parking. Not really as bad as it looks.

We entered near the food court, where we were very impressed by the variety of vendors there to serve us. Besides BigMista’s BBQ, there were vendors selling everything from Mexican cuisine, to Peruvian, to Asian, to crepes, to sausages, to cobblers, to smoothies, to fresh squeezed lemonade, and many others that were available for the hungry foodie.

We knew that a lot of the good stuff disappeared early, and since it had been open since 8am and we hadn’t arrived until almost 11am (we needed our beauty sleep, dontchaknow…), we didn’t linger at the hot food vendors and went straight to the fresh food merchants (and other vendor booths). 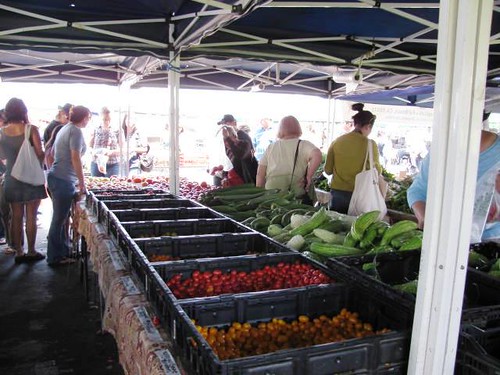 One of the better booths. Lots of Asian veggies here. 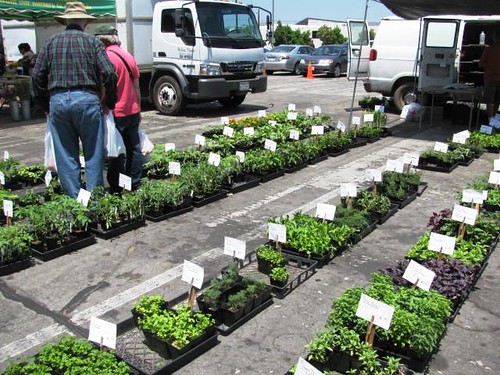 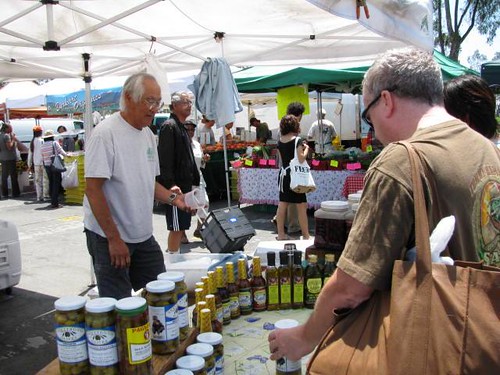 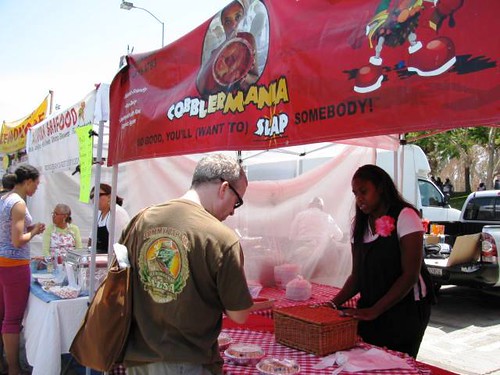 We got a nice variety of fresh fruits and veggies from several different vendors.  We also got some fresh John Dori fish filets from an excellent seafood vendor, and a great mini multi-berry cobbler from CobblerMania above.  Prices were decent and the selection was great.  We were too late to get most of the cuts the fresh buffalo meat dude was selling, but otherwise, we were very pleased with the variety of options we found.

With our hip reusable bags (we didn’t want to get pelted with rotten fruit) full and our wallets nearly empty, we headed back to the food court for lunch.  The line at BigMista’s wasn’t too bad, so we jumped in for our turn. 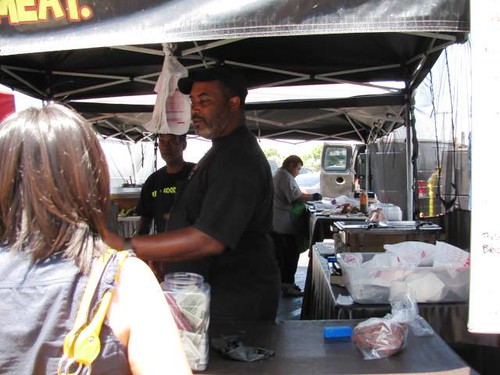 BigMista's BBQ's Neil Strawder! Soon to be seen on BBQ Pitmasters on TLC!

We’d previously tried his brisket, tri-tip, brisket chili, pig candy, and Moink Balls, and were looking forward to trying his pulled pork,  ribs, and chicken.  Unfortunately, we didn’t get there until almost closing and he was already out of the ribs and chicken!   He was out of a lot of things, actually, and as we got to the front of the line, he scratched several items off the menu and offered us the “BAPOM”, or “Big Ass Pile of Meat”, essentially a selection of his remaining meats of his choice, depending on how much you wanted to spend.  He had one more order of pig candy, so we threw that onto the order with his bbq beans and pineapple cole slaw and looked for a drink and a place to sit. 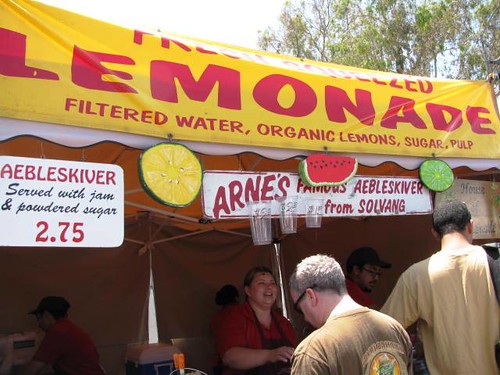 We found another vendor that served fresh lemonade, either straight or with strawberries, raspberries, lime, or multi-berry.  We both chose multi-berry and then tried to find a place to sit while we ate.  Unfortunately, there was not nearly as much seating as there were people eating. 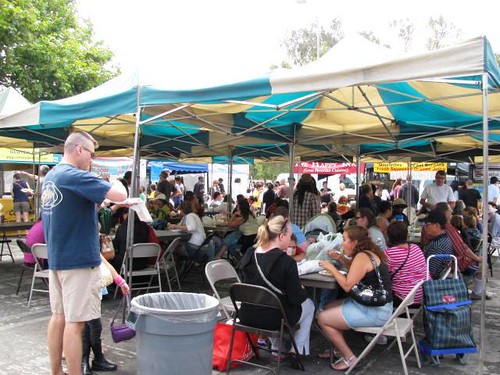 Fortunately, there was a park immediately adjacent to the Farmer’s Market, and we found a little spot on a hill overlooking the market as they began announcing that it was time for the market to end and for the vendors to tear down.  We sat on the grass, wishing we’d brought a picnic blanket, and hungrily opened up our BAPOM from BigMista’s BBQ. 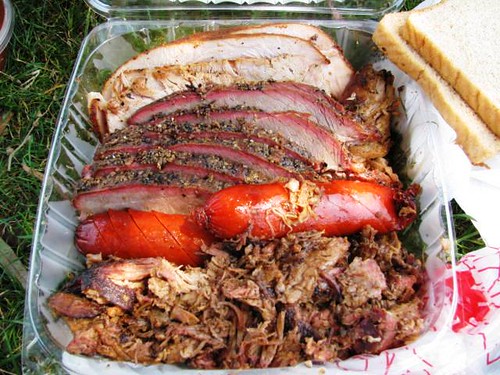 I confess I really wasn’t all that excited about having the turkey.  Aside from Thanksgiving, turkey is pretty much a meat of last resort for me, generally too dry and bland for my tastes.  But damn!  I make a really good cooking-bag turkey, and a pretty tasty smoked turkey, but this was without a doubt the tastiest, most tender white meat turkey I’d ever had.  The hot links were okay, the pulled pork was good, the brisket met his usual standard of excellence, but the turkey really blew me away.

Overall, we were pretty happy with our day.  Definitely way better Farmer’s Market than Yorba Linda’s pathetic gathering, quite a bit better than Atwater Village, where we visited Big Mista before, and even better than the Fullerton Farmer’s Market, which we haven’t reviewed yet.  We got large bag-fulls of veggies, fruit, jam, and cobbler, and while we were focused on bbq, and had plenty leftover for lunch the next day, we could easily have happily eaten at a half dozen other hot food vendors we saw.  As per usual, some of our fresh fruits and veggies went bad a bit faster than they do when we get them at the grocery store, where they are harvested less fresh, and often chemically ripened, but on a whole, we were very pleased with the selection and the taste of our (semi-) local Farmer’s Market.

The Taste Place is a food blog published by husband and wife Jeff and Colleen Greene -- serving up recipes, reviews, tips, techniques, and experiences since April 2009. The … END_OF_DOCUMENT_TOKEN_TO_BE_REPLACED