You are here: Home / In the Kitchen / “This Ain’t No Weenie Roast”–Hoot in the Hills Camp Cuisine 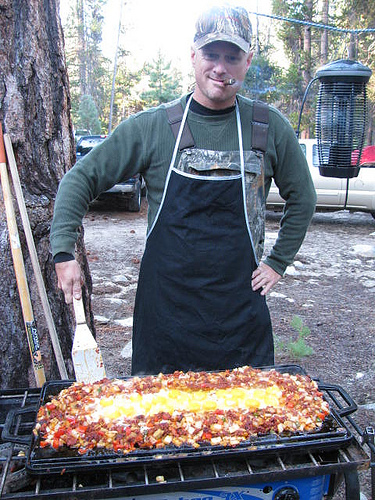 For somewhere between the last 11 or 13 years (there appears to be some dispute), some of my old high school buddies and I have gotten together for a weekend or more every summer to go camping and hang out in a manly-man fishing, shooting, grilling, and drinking sort of way.  It began when my buddy Mike was living in Florida working for the Coast Guard, and one year said, “I’m coming out to California to visit, and I don’t have time to visit all y’all one at a time, so we should all go camping or something.”  We all immediately realized the brillliance of the idea, and the first Hoot in the Hills was born.

Since then, we have changed locations, gone from campgrounds to wilderness “dispersed camping areas” in the High Sierras, lengthened the weekend from three days to four days, and Mike has moved back to California and then to Florida again, but we have maintained the tradition ever since.  The other tradition we have maintained is very good food.  We have always had pretty good food.  We’ve always strived (strove?) to eat well and drink well, and to make the camping trip a cut above the average camp cuisine. And as we have gotten older—errr, more mature, and our relative positions in life have advanced, our gear and meals have improved markedly.  Our unofficial Hoot credo has become “this ain’t no weenie roast!”, a motto that has only grown to the point that we are now nearly completely out of control.

In the past, I did most of the dinners, and in all modesty, they’ve been pretty good–at least as far as camp cuisine is concerned.  Among other things, I’ve done Jamaican  jerked chicken, baby back ribs, tri-tip,  campfire trout, foil potatoes, foil vegetables, corn on the cob, spiced apples, hot and spicy shrimp in a foil packet, and bbq beans, all of which I’ve blogged about here.  Additionally, Mosley, the Fire God, traditionally brings up his ham and beans and jalapeno cornbread for the first night, when we have always thought we didn’t have time for a full, freshly prepared meal after camp set-up.

As time has gone on, we’ve set up a system where a different person is responsible for dinner each night, and, more importantly, they are held responsible for what they cook.  This has resulted in what has become a competition for great meals, and ball-busting that can last for years if one should fall short.  This has led to dishes like a seared pork loin in red wine reduction and a full crawfish boil, with crawfish flown in from Louisiana (how the bears didn’t find us that night is still a miracle…).  On the other end of the equation, Kevin is still hearing about the year he was accused of bringing “leftover Mexican food”, because some of it was re-heated at camp.  And Shockley was so traumatized by the hazing he received for how late at night his (admittedly awesome) ribs were finally ready last year, that this year he reached way above and beyond any meal we’d had before.

It is clear that this past year (last week), we have reached a standard that will be VERY hard to surpass.

Even though we now make it up into the high Sierras by noon, the first night’s meal was still Mosley’s traditional standard ham and beans with the jalapeno cornbread.  It’s very nice, even if I did dump half my bowl of beans on one of the two pairs of long pants I’d brought for the trip (more about future first night meals below…).

This might be a good time to mention our breakfast routine.  I’d call Giuntoli our breakfast boy, but now that he’s a Chief Petty Officer in the Coast Guard, that doesn’t seem quite right.  But regardless, there is only one guy who is both willing and able to wake up early enough in the morning to cook breakfast for the rest of us.  And it is a ridiculously extravagant breakfast he prepares.  As I understand it, he and McMahon (who is assigned to assist Giuntoli ever since the leftover Mexican food debacle) budget something close to 4 eggs and a half pound of meat, plus onions, peppers, and cheese, per person.  Some days it is bacon, sometimes andouille, sometimes linquica, and sometimes chorizo, but whatever it is, you can guarantee it will resolve whatever morning-after issues you may be feeling and also that it will be ready well before you were actually wanting to be out of bed.  Such is the good news-bad news portion of assigning breakfast  to the one guy who is 1) on Florida time; and 2) the only true teetotaler in the group.  To say he is less than sympathetic to our early morning plight would be an understatement….

The breakfasts are so unbelievably overwhelming, and the dinners so elaborate, that lunch has become obsolete.  Chips, pub mix, cashews, pistachios, and beef jerky have become the snacking options that bridge the gap between breakfast and dinner.  The last time we actually brought salami, pepperoni, summer sausage and cheeses for lunch, a bear came into our camp and ate it all, so maybe it is partially superstition, but we have stopped bringing legitimate lunch food ever since.

This year for dinner the second night, Shockley (he of the midnight ribs), brought probably the most unbelievable meal ever–even exceeding the ridiculously over-the-top, bear-baiting crawfish boil.  It started with a $140 prime rib roast (split with co-conspirator Mike Louden), and had as sides chipotle/gouda mashed potatoes and grilled asparagus.  I admit, most of us were a bit skeptical that he could pull off a really good, legitimate prime rib on a bbq.

But following directions he got from Cooks Illustrated, he turned out a phenomenal grilled prime rib.  By slicing off the bones, searing the prime rib on the flames, then re-attaching the bone to cook for three additional hours, it was an amazingly tender and tasty piece of meat.

The sides were worthy of the prime rib.  I do grilled asparagus pretty regularly, but the mashed potatoes were good enough that I had to take spy-style photos of the recipe for future use.

Put together, you wind up with this: 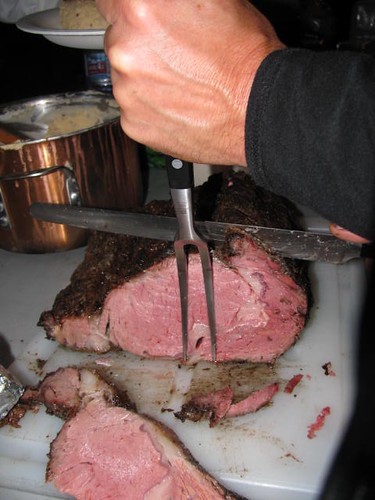 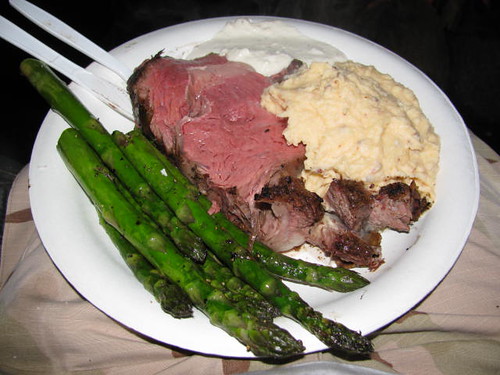 The success of the prime rib added significant pressure to the Saturday meal, for which I was merely the sous chef, and responsible for the side dishes and appetizer.  Newbie cook Tim Gritzner (previously only known for the quality of his home-brewed grappa-shine) had taken the bait of a brisket challenge issued via e-mail prior to this year’s hoot, and I did my best to assist with a quality recipe and, uhhhhh, moral support.  For the seven of us, he picked up a 12 pound brisket (after I talked him out of a 14 pound version!), and rubbed it days in advance of the trip.  I’d found a “Braggin’ Rights Brisket” recipe, from one of my favorite cookbooks, which we essentially followed to a “t”, but that required a minimum 12 hour smoking time to make it edible.  Brisket is a notoriously difficult cut of meat to make tender and tasty, and frankly, none of us were sure we’d be eating anything worth eating before midnight.

For that reason, I decided to make an appetizer course for the first time.  At this year’s Stagecoach Festival, we’d heard about something called “Atomic Buffalo Turds”, but by the time we got to the BBQ Competition area, they were sold out.  After some quick Google work, I found a good recipe, and decided to practice on my buddies.  Of course, when you are talking about a dish that consists of a half-jalapeno filled with cayenne/paprika cream cheese, topped with a Little Smokie, wrapped in bacon, rubbed with a sweet bbq rub, and smoked for two hours, I must confess that I didn’t think I could go too wrong.

And I totally non-humbly acknowledge that I was right.  It was phenomenal!  Though I forgot to bring the already-purchased bottle of raspberry-chipotle sauce to dip or coat it in, it turned out to be totally unnecessary.  The first one was admittedly a bit of a shock to the system, and was spicier than most of the eaters had anticipated.  But by the second one, it was quite tolerable, and the third one was like candy!  Well, an admittedly spicy, smoky, and fatty candy, but candy nonetheless… 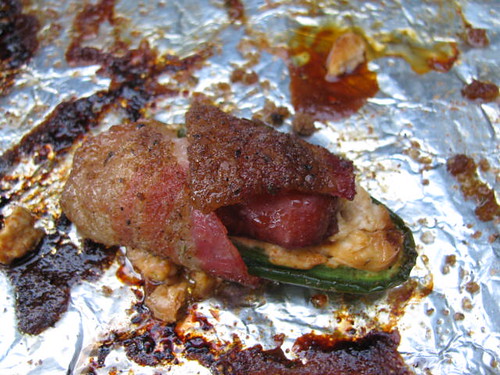 As for the meal itself, the brisket was undoubtedly the best I’d ever had from a non-professional, and possibly better than all of them as well.  It is difficult to tell sometimes how much of our food is really as good as it tastes, and how much is aided by the atmosphere of the great outdoors and good friends, but I’m pretty sure this brisket legitimately kicked ass.

As for sides, I did some spicy bbq beans and a home-made North Carolina-style cole slaw that I found on-line and modified just a bit, as well as some garlic sourdough bread.  Both turned out quite well (and I was concerned about the slaw–salad for the Hoot?  Very risky…), but the brisket was truly the star of the show. 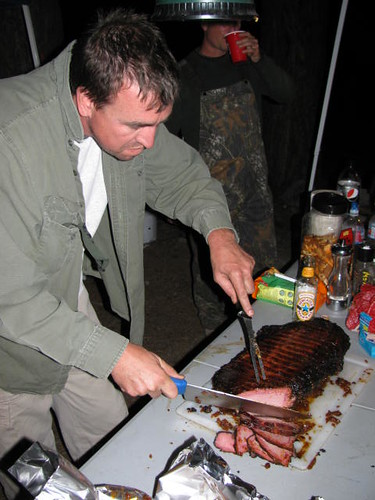 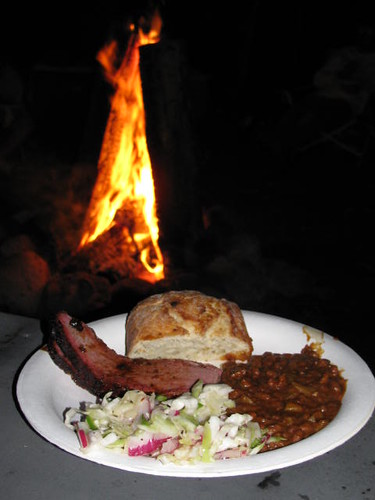 It was without a doubt the tastiest Hoot ever.  Which leaves us with the question, “how can we possibly top this?”  We did take the occasion of the double-team prime rib and brisket awesomeness to mention that now that we generally make it to camp by noon, there was really no reason to bring up a pre-made meal for the first night, and that maybe, possibly, no offense intended, but perhaps we could have a freshly cooked meal the first night as well?

After a profanity or two, Mosley immediately rose to the challenge, and began contemplating future meals to rival this year’s Hoot meals.  Ossobuco?  Pit-roasted whole pig? Regardless of the final decision, I’m quite certain that whatever we wind up eating next year, the food will be worthy of the braggable Hoot tradition.  After all, this ain’t no weenie roast…

The Taste Place is a food blog published by husband and wife Jeff and Colleen Greene -- serving up recipes, reviews, tips, techniques, and experiences since April 2009. The … END_OF_DOCUMENT_TOKEN_TO_BE_REPLACED