You are here: Home / Out & About / We Love Bigmista’s BBQ on Valentine’s Day 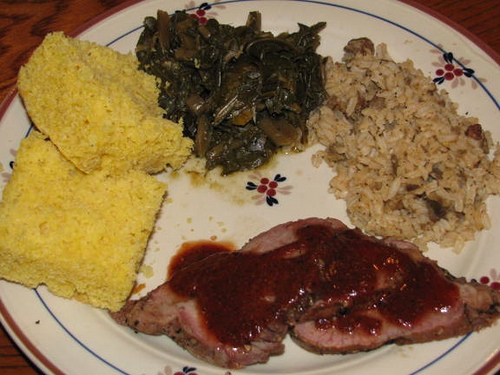 I know it’s been a while since our last original post (ironically, since February 14th, which was the day this particular entry took place!), but between Colleen’s crazy workload and our new beagle pup’s demanding schedule, it’s just been hard to get these done.  And I apologize in advance that this isn’t even a post about something we’ve cooked, but about somebody else who cooks that we happen to like very much.  I promise to get some original (and semi-original) food and recipe posts up soon!  But this post is about a guy who has taken his own food obsession pro, and our uber-romantic (well, tasty at least) Valentine’s dinner.

We first met BigMista at the Stagecoach Festival last year, and blogged about it here.  Since then, we have stayed in touch with him through his Twitter feed, Facebook page, and website.  Unfortunately, while we’ve salivated over the pictures and his descriptions of his various specialties, we hadn’t had the opportunity to go get any of it.  He appears almost exclusively at daytime Farmer’s Markets in Atwater Village, Torrance, and El Segundo, which isn’t exactly on the way to anything else for us, unless we had a pretty good excuse, like say, a special occasion or something…

And then one day, while cyber-stalking  Big Mista casually reviewing various food blogs, we came across this special:

Okay, maybe driving 45 minutes to the Atwater Village Farmer’s Market to pick up a bunch of BBQ in styrofoam containers doesn’t sound like a romantic Valentine’s dinner to normal people, but it’s been a long time since either of us has been accused of being normal, so we placed our order and awaited the big day!

Besides looking for an excuse to go get some of BigMista’s grub, we’d also been looking for an opportunity to get to a decent farmer’s market.  The one in Yorba Linda seems like a glorified flea market at best, and when we’d gone by there, there was maybe one vendor that appeared to have actual fresh fruits and/or vegetables.  Everything else was prepared food (popcorn, tacos, churros) or crafty crap.  Perhaps it gets better when more is in season, but in January, their wares sucked.  We’d prepared our weekly menu, and it was fairly veggie-heavy, so we headed off to the Atwater Farmer’s Market with a list of fresh fruit and vegetables we needed for the week and a hunger for BigMista’s BBQ. 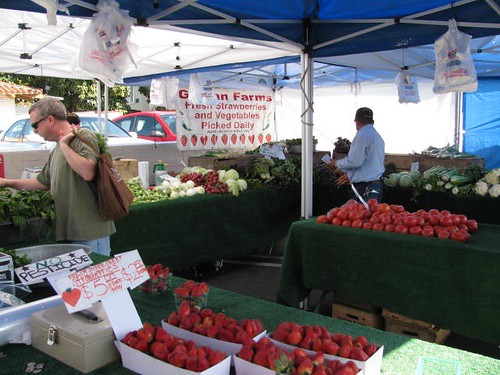 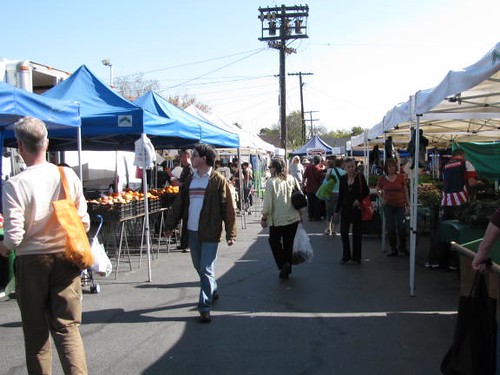 Look!  Actual fruits and vegetables at a Farmer’s Market!

The Farmer’s Market was definitely better than the one in Yorba Linda.  There were probably 15-20 tables and booths with actual fresh produce, as well as a variety of other items such as salsas, nuts, spices, and crafts.  There was even a booth with what was advertised as fresh sushi-grade fish and seafood!  We picked up a variety of onions, peppers, squash, tomatoes, and garlic, as well as some Asian Pears.  It all looked fresh and was quite reasonably priced.  We noticed that it tended to go bad a little faster than our usual store bought produce, but that was likely just a result of their natural ripeness, rather than the artificial ripeners that the big produce distributors use. 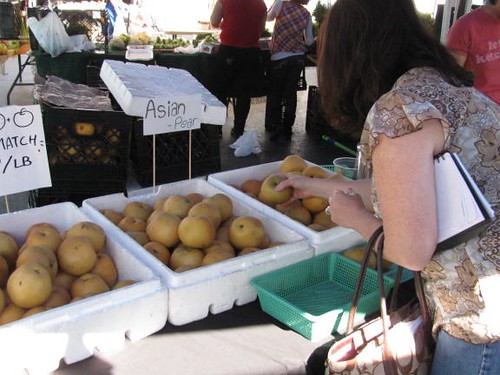 We also bought some habanero salsa and some “Howling Dog Hot Sauce” (listed ingredients:  Habanero, vinegar, herbs, spices, peaches, orange) from “Frogdog Herbs”, a huckster who seemed to enjoy figuring out how many different things he could put habaneros or jalapenos in.  Naturally, we hit it right off and tasted quite a few of his creations (habanero hot fudge, jalapeno peanut brittle, etc.). 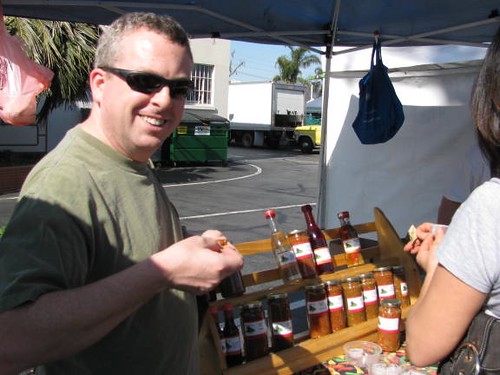 But BigMista’s BBQ was our raison d’etre (every food blog should have some snobby-sounding French stuff in it periodically) , and  we stopped there on our way out to gather our bounty.  BigMista and Mrs. Mista were great as always, making friends as fast as they made their food. 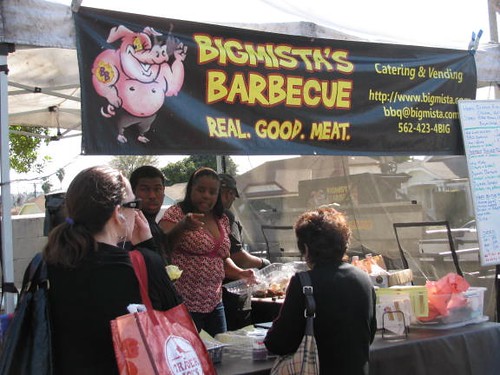 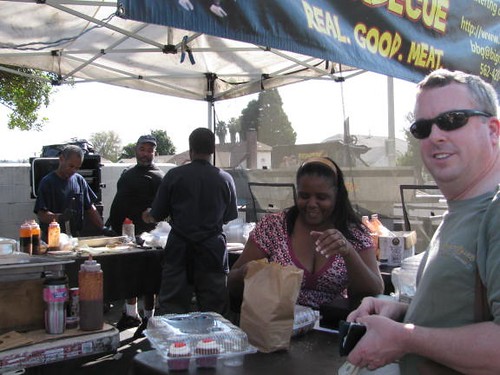 They loaded us up with our Valentine’s dinner, and even though our meal included everything from an appetizer to dessert, we had to order moink balls as well, which are another appetizer we’d read about and had to try.  It is essentially a meatball, wrapped in bacon, spiced and smoked, then served with a blueberry chipotle sauce.  It looked and smelled good enough that we actually couldn’t wait to get it home and had to eat it in the truck before we got back on the road! 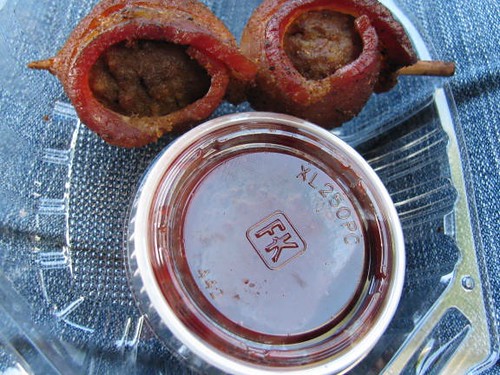 When we got home, we immediately busted open the containers to get to our Valentine’s feast.  It started with the pig candy, which made the list of “99 Things to Eat in Los Angeles Before You Die”.  It is essentially bacon, with brown sugar, bbq rub, and cayenne (?), which is then smoked.  I think it was Homer Simpson that once described bacon as the “candy bar of meats”, and this creation proves it. 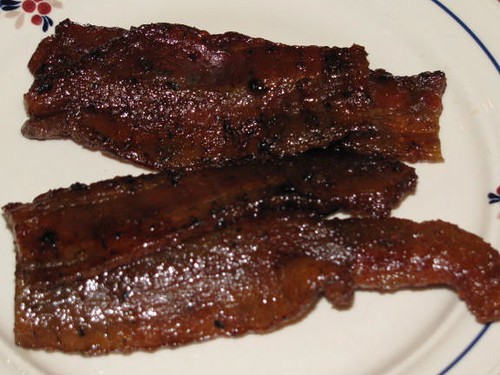 The rest of the food was up to the occasion as well.  The brisket chili was unbelievably good, the dirty rice may be the best I’ve ever had, and the collared greens were quite tasty.  The tri-tip was very good, and the spicy bbq sauce they gave us made it even better, but I am deluded enough to think I can do it better at home.  I’d have preferred his pulled pork, brisket, or possibly even his smoked chicken, but that’s what happens when your order a prix fixe (more snobby French phrases) meal.

The red velvet cupcake was a nice capper to the Valentine’s feast, allowing us to pretend it was actually a romantic meal, rather than Farmer’s Market take-out! 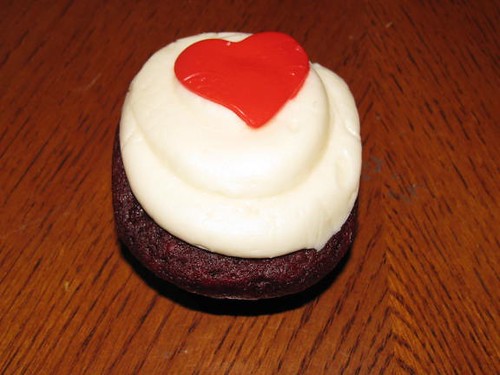 See!  It has a heart on it!  That makes it all Valentinish!

BigMista told us that the Torrance Farmer’s Market is actually better (bigger) than the one at Atwater Village, so we’re going to try to make it out to see him there, but if not, he’s already announced that he’ll be a part of the OC BBQ Festival on June 12th, an event we do not plan to miss.  Unfortunately, he will not be making it to the Stagecoach Festival BBQ Competition this year, but we will, making it yet another weekend where we’re unlikely to be blogging here.  Hopefully we will encounter more blog-worthy food and we’ll report back on it later!

NOTE:  BigMista has now opened an awesome restaurant in Long Beach.  As you can see from this Yelp page, those who think Lucille’s BBQ or McDonald’s McRib don’t always get it, but fans of legit BBQ love it!

The Taste Place is a food blog published by husband and wife Jeff and Colleen Greene -- serving up recipes, reviews, tips, techniques, and experiences since April 2009. The … END_OF_DOCUMENT_TOKEN_TO_BE_REPLACED