You are here: Home / In the Kitchen / Recipes / Dinner Recipes / Really Tasty Ribs 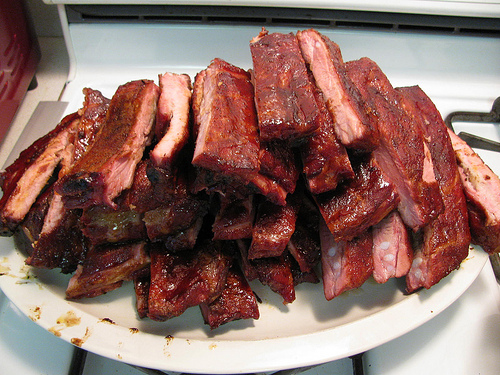 Ribs can be problematic.   They are really easy to dry out, and as easy to make tough by undercooking as they are by overcooking them.  Some suggest boiling the ribs, but that drains a lot of the flavor from the meat, and unless you’ve got the time and equipment to do a long smoke, your options are limited.  I’ve experimented unsuccessfully with a number of strategies over the years before hitting on the recipe I’m writing about here.

It started with a recipe from my old cooking favorite, Reynolds Aluminum Foil, which I have since modified and improved in a couple of ways.

I prefer baby back ribs.  I believe the meat is more tender and tasty, and they fit better in the foil packets I use in the cooking.  I’ve modified the recipe for use with spare ribs and country ribs and boneless ribs, but baby back turns out the best.

One tip that took me years to discover begins with the first preparation of the meat–removal of the membrane!  I didn’t even know there was a membrane, and apparently there is some debate amongst grillers about whether it should be removed or not, but there is no question my ribs are now more tender and the meat more accessible now that I remove it first.  Many believe it allows the rubs and sauces to better penetrate the meat as well.  It is on the inside (bony) side of the ribs, and can be removed quite easily with the assistance of a butter knife, fork, or even a screwdriver and maybe a paper towel.  Just lift the membrane along the edge of one of the rib bones, and carefully pull and peel it straight off from there.  For more detailed information and tips,  you can Google “rib membrane removal” and see several instructional videos and write-ups, but it really isn’t that complicated.

I always cut the rack of ribs in half, just to make it more manageable in cooking, but also it makes a handy serving size for the average adult.

After removing the membrane apply your favorite dry bbq rub liberally.  I have use Zeke’s Top Dog Dry Rub, and it is quite good, but I confess I was sucked in by the cool dog on the label.  You can (and I have) just as easily use one of Emeril’s rubs, one of the Cajun/Creole Rubs, or just about any other seasoned salt or dry rub you like.   My current favorite is the rub from my smoked chicken recipe, with an extra tablespoon or so of brown sugar.  If you lightly brush the ribs with olive oil first, the rub will stick better and I believe it helps with flavor absorption as well.  For best results, do this the night before, but you can also do it in the morning for an evening grilling if you don’t have time.

Cut pieces of aluminum foil a few inches more than twice as long as the length of each half rack and lay one rack near the middle of each, as shown here: 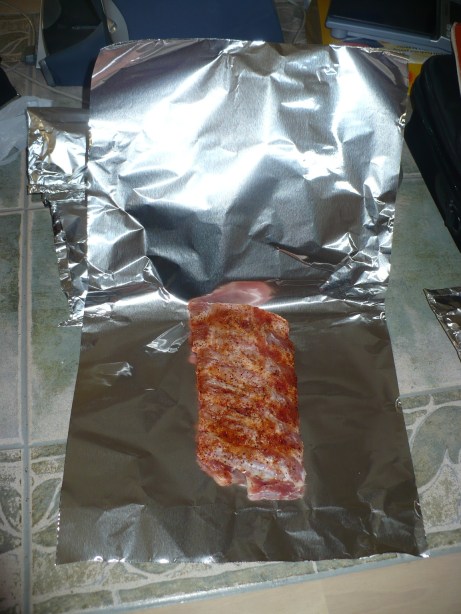 Half Rack of Ribs Placed in Foil Section for Crimping

Then fold the foil over the top of the ribs and crimp the two sides of the foil as tightly as possible by folding it over 1/4 or so at a time and then folding the crimp in half.  It will need to be nearly water tight.  Note that while you  want the crimps to be tight, you should try to leave room for the ribs to breathe, so try to leave a decent pocket for them inside the foil.  Then propping the packets up at an angle so the open front is up top (I usually put the packets in a platter, propped up on the edge), pour about 1/3 cup of apple juice into each pocket, as shown by my sous chef Hunter here: 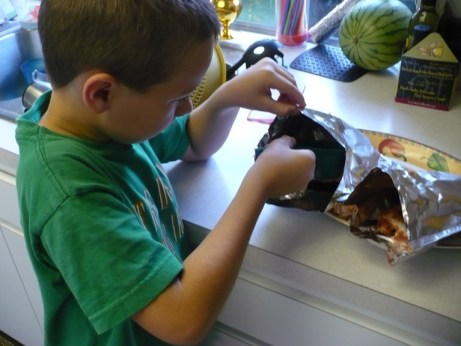 I use Martinelli’s, but any decent apple juice should do.  My original recipe called for water, and I have seen other recipes that call for using a lighter colored beer or bourbon or a cola or Dr. Pepper, all of which have their own merits.  I have tried all of them, and determined that the apple juice adds a terrific sweet flavor to the ribs without distracting from the taste of the ribs.  After adding the juice to each packet, seal the open end as you did the sides.  There will likely be a little bit of leakage from at least some of the packets, but if it isn’t too much and you fold the crimps upwards, it will limit the amount of juice you lose.

Place the rib packets on a grill at high heat and cook covered for 30-45 minutes.  For the first 30 minutes, you can mostly ignore the ribs as they start to simmer in the juice.  The foil packets will puff up quite a bit while cooking if your fire is hot enough.  After about 30 minutes, start checking on them a bit more regularly.  Eventually one of the packets will boil off all the juice and start to sizzle and smell like it is starting to burn.  Don’t panic, as this will just be the juice starting to caramelize and the ribs will still be okay, but now is the time to take them off the heat.  If after an hour of good simmering inside the foil, none of them seem to be dry and starting to burn, go ahead and stop cooking them.  You can also do them in the oven by putting them onto a rimmed cookie sheet at about 400 degrees for an hour.  It is more controlled and less likely to burn off, so an hour is a fairly safe estimate in the oven. 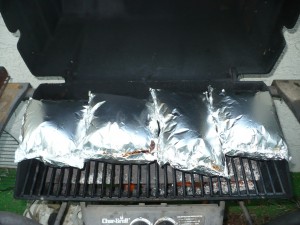 Foil Packets Puffed Up From Cooking on Grill

When I do the ribs on my gas grill (hey, even I take a shortcut sometimes…), I will open the rib packets on the grill.  With a platter nearby, carefully cut the top of each foil pocket open, and using tongs, lift the ribs out and onto the platter.  Be careful, because if you completely rip open the foil, any remaining juice (at a boiling temperature) will spill out.  If you are doing this on a charcoal grill or in the oven, you need to carefully place the packets into a deep baking pan or similar container to cut them open.

Now you can baste the meaty side of the ribs with your favorite BBQ sauce, whether it be a store bought one or a home-made recipe.   I am obsessed with sauces, and seem to always have an assortment of independent brand sauces on hand, depending on whether I want sweet or spicy or traditional or some combination thereof. 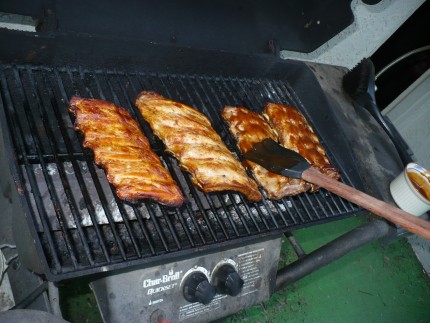 Basting the Ribs with Sauce on the Grill

At this point, place the ribs meaty side up directly on the grill, on medium heat if you have that sort of control.  After five minutes, turn it over to meaty side down on the grill and baste the bony side of the ribs.  Cook for no more than five minutes on this side and it should be finished.  The ribs have been fully cooked in the foil packets, so you don’t have to cook them long at all, and it is very easy to char the ribs here if you cook it too long.  Most BBQ sauces (other than Woody’s Cook-In, which I’ve written about before) have a high sugar content, and they will caramelize/burn very quickly if you let them cook over a fire that is too hot or too long.

You should now have ribs that are beautifully tender, sweet to the taste, and ready for the table! 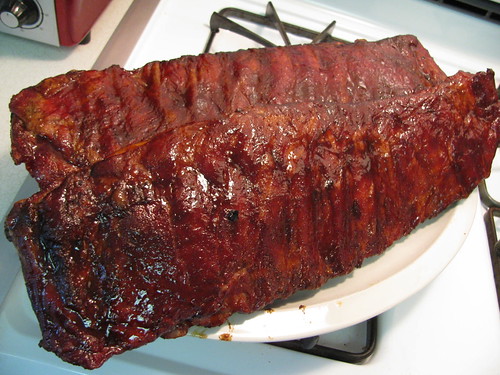 The Taste Place is a food blog published by husband and wife Jeff and Colleen Greene -- serving up recipes, reviews, tips, techniques, and experiences since April 2009. The … END_OF_DOCUMENT_TOKEN_TO_BE_REPLACED