You are here: Home / Out & About / Stagecoach Festival–A Foodie thumbs up! 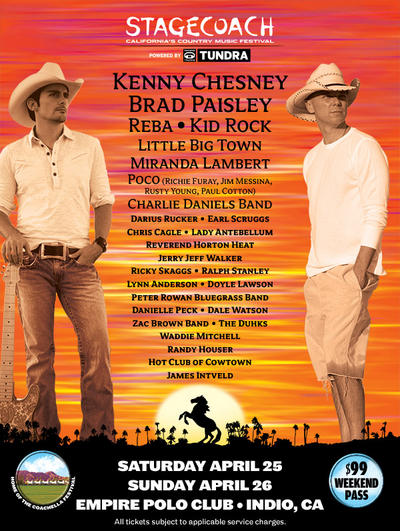 Last weekend Colleen and I journeyed out to Stagecoach Festival at the Polo Grounds in Indio (Polo Grounds in Indio?  Don’t ask…).  We went for the music and the people watching, mostly expecting the standard festival food, but were happy to see a wide variety of choices for meals there.

Most compelling was the Great American Barbecue Tour Competition, hosted by the Kansas City Barbecue Society.  For $10, you got five tickets, redeemable at the dozens of BBQ fanatics participating in the competition.  Each ticket was to entitle you to a 2 ounce portion of sweet, succulent meat at whatever booth you chose, but I was very pleased to find that most booths over-served, likely in an effort to win our vote in the “People’s Choice Awards”, voted upon by actual festival goers.

There was more than enough food to make a complete meal at a good price, especially when you compared it to the usual festival prices for hot dogs and pizza slices.  Our favorites were definitely Bigmista’s Barebecue out of Long Beach, who had unbelievable smoked beef brisket and an owner with a serious talent for PR, and the Cowboy Way BBQ out of Palm Springs, who had the best chili we’ve ever purchased, as well as the best pulled pork we found at the competition.

Both were manned by extremely personable chefs, and both cater, so we recommend looking at either if you’re in the area and looking for some good food for a party.

Our only complaint (besides some of the bbq competitors clearly being less worthy than others) was that to replenish your drinks or to get anything approaching a side dish, you had to leave the bbq competition area entirely.  I’d recommend that in the future they include some “refreshment” stands within the bbq area.   I’d complain about the cost of the refreshments, but it wasn’t any worse than any other festival or sporting event.

As for the music, the  Charlie Daniels Band and Doyle Lawson were excellent enough that we didn’t feel it necessary to wait around for the so-called “headliner” Brad Paisley, but then, Colleen and I do run a bit old school in our tastes…

The Taste Place is a food blog published by husband and wife Jeff and Colleen Greene -- serving up recipes, reviews, tips, techniques, and experiences since April 2009. The … END_OF_DOCUMENT_TOKEN_TO_BE_REPLACED